Eighty days and eight countries later, my Southeast Asia trip has come to an end. I fly to Japan tomorrow and then onward to Paris, with a day in Abu Dhabi in between. For a part of the world I had never given much thought to until the last few years, Southeast Asia has stolen my heart. My next destinations will certainly be a massive change of scenery, so I thought I’d reflect on some of the things I will and won’t miss about Southeast Asia. 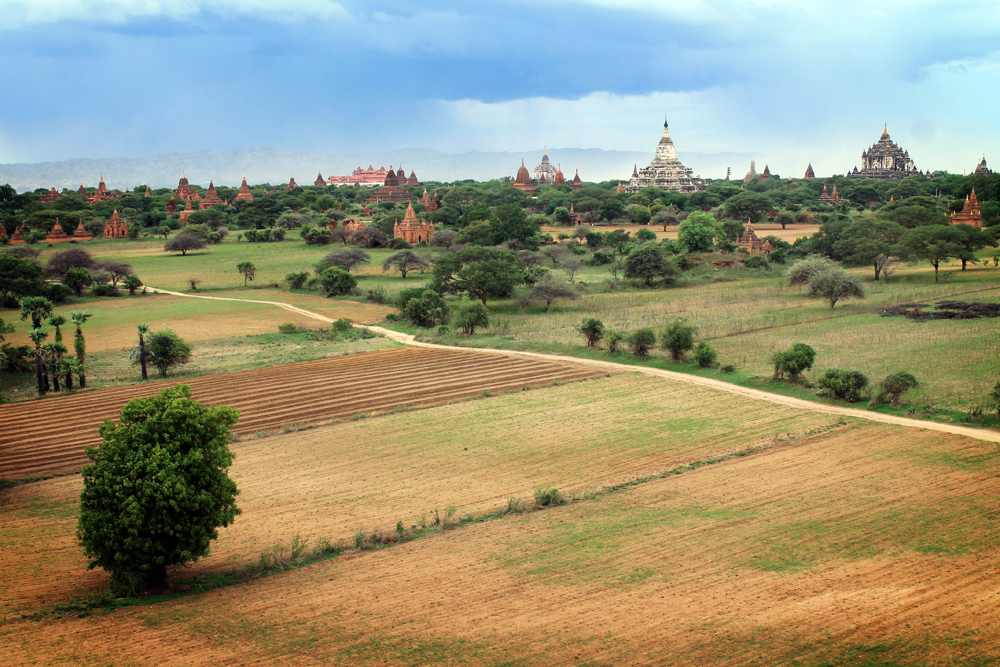 Sitting atop a pagoda, watching a storm roll in over Bagan, Myanmar earlier this week

What I Won’t Miss

The weather — Growing up in Southern California and then living in Spain and Australia, I’m definitely designed for warm weather. However, Southeast Asia’s climate is something else entirely. I’d been warned about the region’s heat and humidity, but not until I arrived did I have any clue just how sweltering it would be. Constant sweat is just a fact of life when you’re traveling Southeast Asia, so you’d better embrace it. Ohh how lovely a few days of 70F, dry weather sound to me.

Sticking out like a sore thumb — As a 5’8″ pale blonde, no one would ever mistake me for a local. No surprise there, but what comes with that is constantly being targeted as a tourist. The “tourist tax” meant I was often sneakily being charged for food, taxis, etc. at a higher rate than locals. It was impossible to walk anywhere without being offered something by salesmen. In Phnom Penh and Siem Reap, Cambodia, I literally could not spend more than ten seconds on the street without being accosted by, “Tuk tuk, lady?” Naturally, there are tourist traps and scams no matter where you go, but much of Southeast Asia seems particularly rife with it. 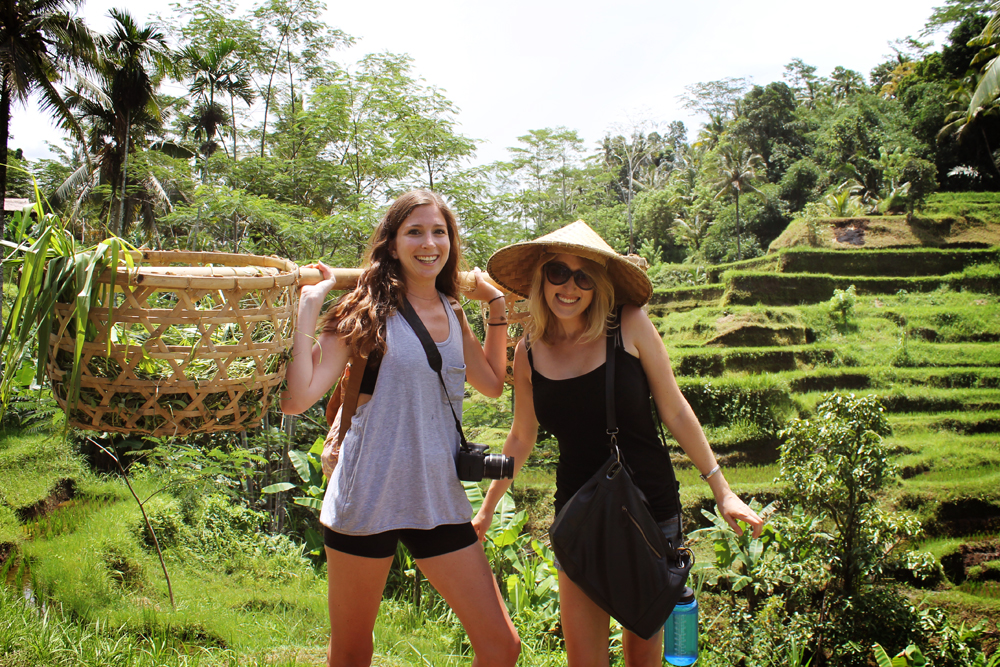 Totally fitting in as Balinese rice farmers near Ubud

The toilets — Toilets that are flushed by hand-dumping buckets of dirty water into them, toilet paper and handsoap as ultimate luxuries, and how on earth are you supposed to use a squat toilet, anyway? Call me high-maintenance, but toilets are the last thing I want lacking in quality. Western toilets, I’m coming for you!

The food — Okay, so this one is going in both lists. Some of the food has been to die for (read on!), but after months of mostly fried noodles and rice with meat, I’m ready for a bit of variety. I’m also excited to find menus on which 90% of the items don’t consist of fish or seafood, which I don’t eat. And cheese! And wine! Both are rare in this part of the world, and you can bet I’ll be going crazy with them in Europe. 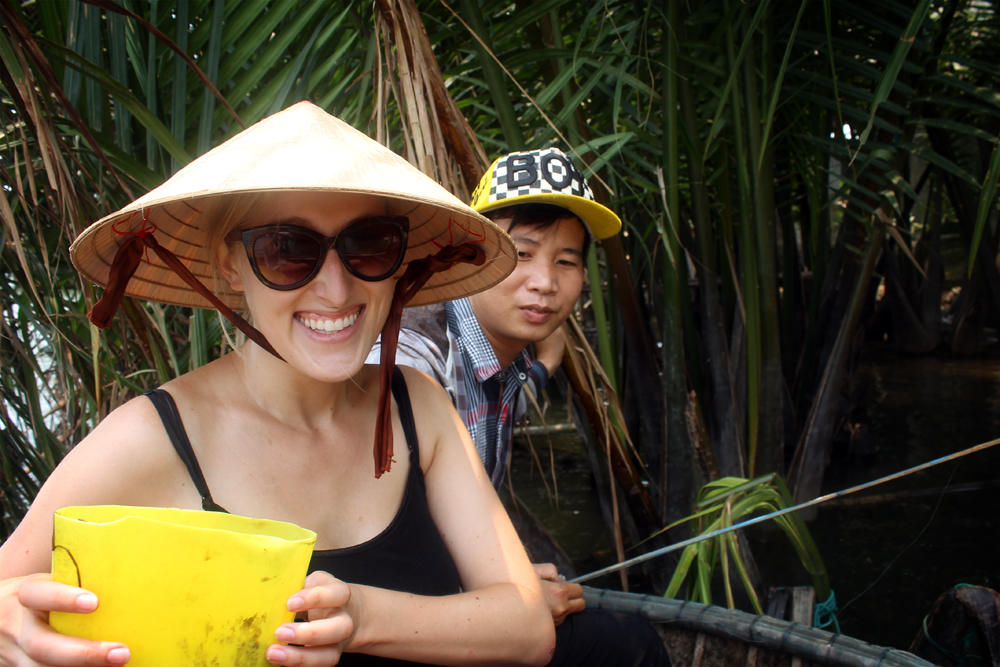 Crab fishing in Hoi An, Vietnam. Experience: 10/10. Just don’t make me eat them!

The lack of public transportation — I love being able to get myself wherever I need by hopping on metros or buses, but in most cities I’ve visited in Southeast Asia, public transportation is almost non-existent (although Taipei and Kuala Lumpur had fantastic metros!), meaning you spend lots of your time and money in taxis, Ubers, or tuk tuks. However, I do love how inexpensive private transportation is here. $3 for a forty-minute drive across the city? I’ll take it! 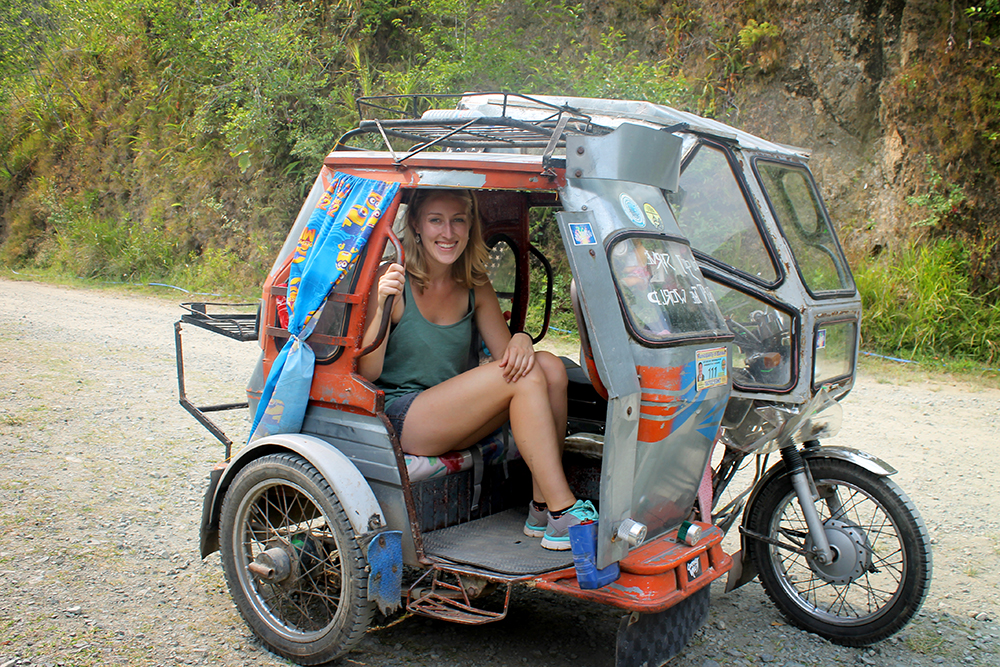 Seeing Banaue’s rice terraces in the Philippines by tricycle

The mosquitoes — I don’t know if I’ve gone one day since I arrived in March without being covered in mosquito bites, even constantly reapplying repellent! But I’ve also managed to dodge mosquito-borne diseases like malaria and dengue fever, so I really can’t complain.

What I Will Miss

The prices — Ohh Southeast Asia, you’re so lovely and inexpensive. Giant, delicious, sit down meals for under $3 U.S., beers for less than a dollar, bartering to get that souvenir down by twenty cents…

The hostels and hotels — I’ve been fortunate enough to stay in some lovely hostels and even lovelier hotels during my time traveling Southeast Asia. Even in the poorest of countries, accommodation can be surprisingly luxurious. That can be both a blessing and a curse, as it’s nice to escape to air conditioning and clean toilets but it also prevents you from truly experiencing the culture. Nonetheless, you definitely get a lot of bang for your buck with lodging in Southeast Asia. 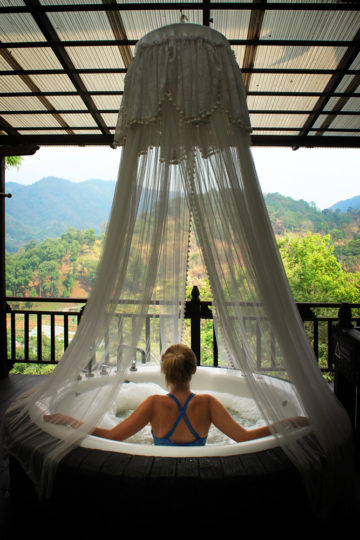 A bit of rest and relaxation in my private jacuzzi at the mindblowingly beautiful Panviman Chiang Mai, Thailand

The languages — I’m a total languages nerd and, even though the variety of languages I don’t speak a word of has made things slightly trickier (although the level of English here is amazing!), it’s fascinating hearing them and picking up words and phrases in each country. And one of the coolest experiences of my trip? Ordering a meal completely in Mandarin!

The temples — Europe is to churches as Southeast Asia is to temples: you’ll find them everywhere you go and will likely be sick of them after just a few weeks. From Angkor Wat to Bagan and so many in between, I couldn’t even begin to count the number of temples I’ve seen during this trip, but I’m still not tired of them! Though I know very little about architecture, it doesn’t take a master to see how gorgeous they are and how much the styles vary from country to country and even temple to temple. 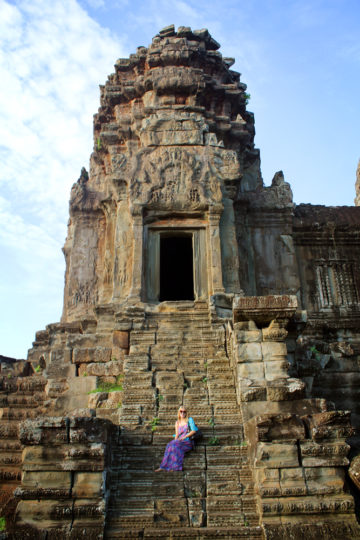 The food — I told you this one would be on both lists. Although I’ve tired a bit of the lack of variety in some places, I’ve also tried some of the most delicious meals of my life in Southeast Asia. Vietnam was my hands down favorite for food. I was so confident in its quality that, even as a horribly picky eater, one night in Saigon, I found myself walking into a hole-in-the-wall restaurant with zero foreigners where nobody spoke any English, sitting down, and eating whatever they put in front of me. Turned out to be bun cha, the same meal Anthony Bourdain and President Obama recently dined on together in Hanoi. 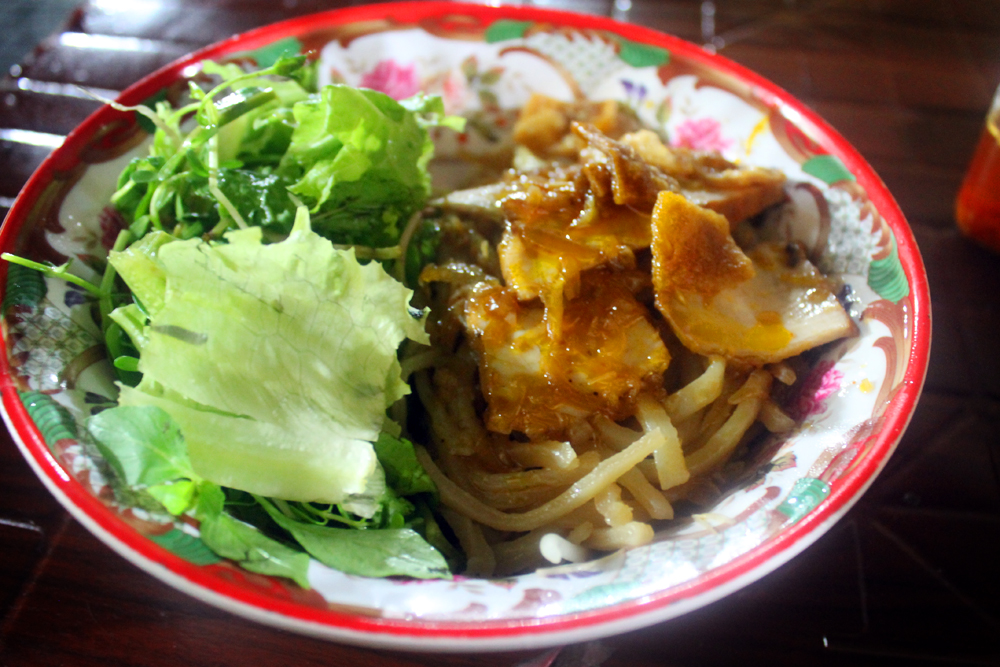 It may not look like much, but this had to have been the most unexpectedly delicious meal of my trip, cao lau noodles from a street vendor in Hoi An, Vietnam

The sense of adventure — I love, love, love traveling the U.S., Australia, and Europe, but you have to admit it’s all fairly easy and risk-free. In Southeast Asia, you’re never quite sure what’s going to happen. No information online about trains? No worries, just wing it when you arrive. No English speakers in sight when you need to ask a question? Find non-verbal ways to communicate. Not sure if that street food will give you salmonella? Whatever, it looks too delicious to worry about some stomach pains. Bus broken down in the middle of nowhere? It’s fine; you’ll get there one day. Everything is something of a challenge when you’re traveling Southeast Asia, and that makes every moment a thrill.

The travelers I’ve met — As daunting as solo travel sounds, you’re constantly meeting fellow travelers everywhere you go, and, with everyone so far from home, you build strong friendships fast. Sure, I’ve met my fair share of drunken 18-year-olds with an IQ of 50, but I’ve also gotten to know some of the most interesting people I’ve ever encountered. I may never see them again, but many of the best memories of my trip would never have happened without them. But I suppose I’m off to meet another cast of spectacular characters! 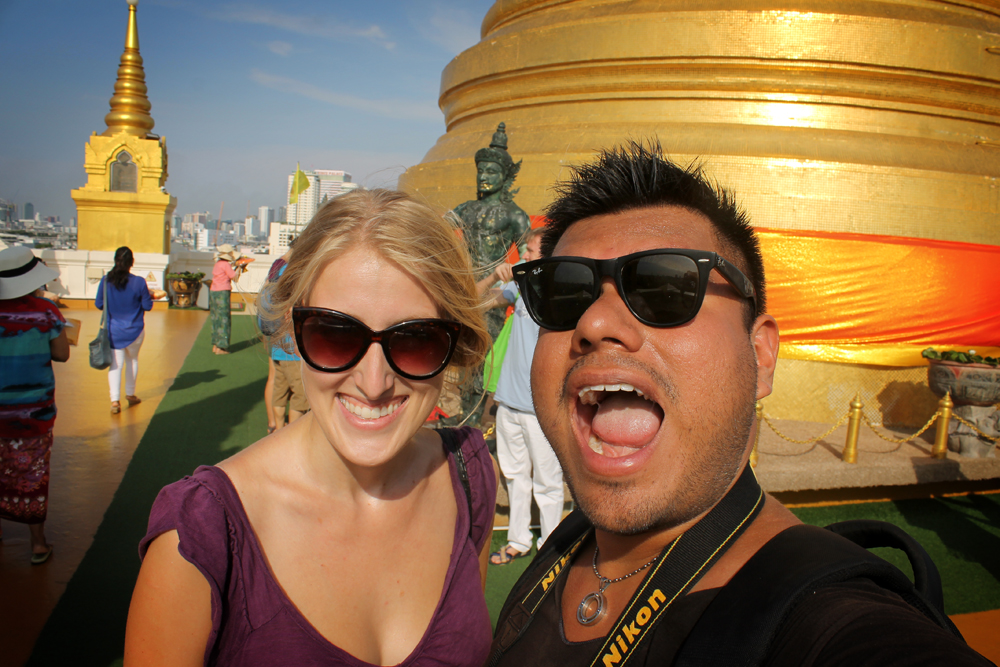 The locals — Obviously, any country is made up of both good and bad people, and it’s unfair to generalize about the characteristics of an entire population. However, as a whole, Southeast Asians are incredibly warm, friendly, generous people. When I began the trip, I was cynically certain people were only saying hello to me to sell me something, but it turned out that many simply wanted to have a conversation — and even when we barely shared a common language, many were a complete delight to chat with. The children screaming, “HIII!” as we drove past them on Siquijor Island in the Philippines, the Malaysian teenagers sweetly asking if they could take a photo with me, the enthusiasm from locals in Myanmar when I told them I was American (“USA! Barack Obama! Very good!”)… How could I help but think more highly of mankind after these encounters? 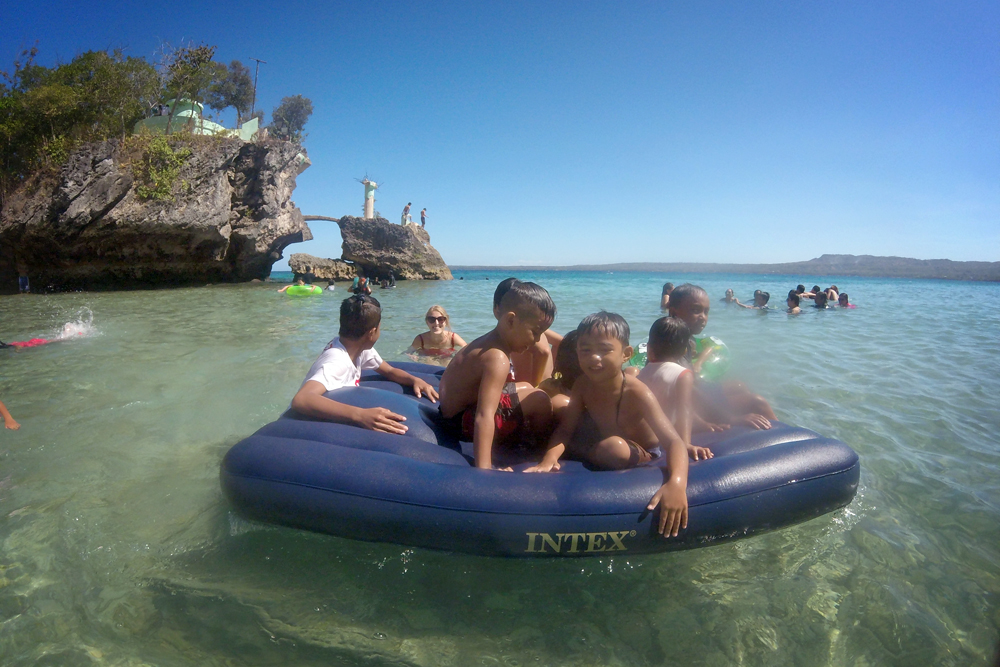 With the majority of my travel plans still ahead of me, I can’t wait to see where this year brings me. It’s bittersweet to bid farewell to Southeast Asia, a place that has both made me appreciate the common luxuries we take for granted in the Western world and yearn for more and more adventure. Indonesia, Malaysia, Taiwan, the Philippines, Vietnam, Thailand, Cambodia, and Myanmar, thank you for everything. My life will forever be better for the time I’ve spent here.