This Sunday, Spain goes to the polls to elect their new national leaders. All 350 seats in the Congreso de los Diputados (similar to our House of Representatives) and 208 of 264 Senate seats are up for grabs, and the results of those elections will determine the new president of Spain.

As you most likely know, Europe hasn’t been exactly flourishing financially lately. There’s a great deal of worrying how long the euro will last, Greece and Italy recently changed their leaders, and there have been lots of recent protest movements, including in Spain. The public is seeing these elections as an opportunity to get an entirely new approach to governing, which will hopefully help Spain out of la crisis (the recession), but we’ll see. 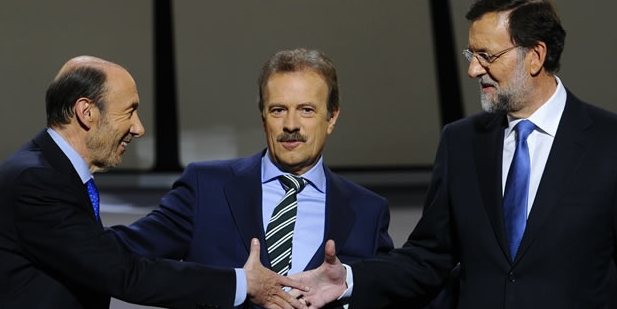 Spain’s presidential candidates (and their moderator) at their one debate

Like the U.S., Spain has two primary political parties, as well as a few minor ones that rarely get a large percentage of the votes. The PSOE (Partido Socialista Obrero Español, or Spanish Socialist Workers’ Party) is the more liberal of the two, and Spain’s president since 2004, Zapatero, is a member of the PSOE. (Zapatero almost lost the 2004 election until Al-Qaeda bombed Madrid’s Atocha train station three days before the election, which, of course, shifted public opinion.) The second party, the PP (Partido Popular, or Popular Party), is the more conservative party, although “conservative” by Spanish standards means far more moderate than the American GOP.

Zapatero, understanding Spain’s desperate need for change, announced a few months ago he wouldn’t be running for re-election, so Alfredo Pérez Rubalcaba is Sunday’s PSOE presidential candidate. The PP candidate is Mariano Rajoy. The PP and Rajoy are expected to win easily since the PSOE just can’t seem to get it right (although, of course, if the PP were currently in control, they’d be blamed just as much for Spain’s problems), so there’s not much mystery about what will happen Sunday.

The most interesting part of this election for me is how not obsessed with it the Spanish public seems to be. You all know how crazy Americans go over presidential elections. The 2012 election is almost a full year away, and there’s been incessant talk about it for months already. Spain, on the other hand, forbids campaigning before about 2 weeks ahead of the election, which gives an entirely different feel to this thing. You can spot PSOE and PP posters and banners around the country now, but there’s nowhere near as much publicity as there would be in the U.S.

PSOE and PP election billboards. “Fight for what you want” with Rubalcaba or “Join the change” with Rajoy.

I don’t have a TV, so I don’t know how television coverage of the election is, but I do read Spanish newspapers almost daily, and there’s usually just one or two brief articles about the upcoming elections. Of course, these are free and not exactly award-winning newspapers I’m reading, but, still, even the National Enquirer goes crazy over American elections! The only times I’ve heard Spaniards talk about the elections have been when I specifically asked them about it. It’s not that the Spanish don’t care about their government — Spain’s 2008 national election had a 76% voter turnout compared to America’s 64%. It’s just not quite the media blitz I’m used to seeing. I’m guessing I won’t be staying up all night Sunday watching cable news channels’ live maps, polls, projections, and commentaries.

If anything, this is making me excited for our 2012 presidential elections, when I will get to spend the night glued to CNN. And it’s kind of fun that I happen to be watching the West Wing episodes chronicling the Santos/Vinick race while elections are going on here in Spain. Whatever happens Sunday, I just hope it helps Spain — and the rest of Europe — start figuring out its economic problems. It would also be quite nice if the euro didn’t collapse, forcing me to flee the continent. I like it here. 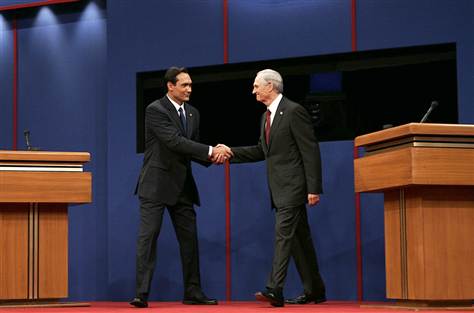 Not quite as fun as this election.

I’d also like to note that Spain has only had free elections for the past 34 years, so, although most people take it for granted, this is actually a pretty inspiring process to see.

If you’re interested in a really great, more thorough guide to Sunday’s Spanish elections, check out this post. And if you’re Spanish, be sure to get out there and vote this Sunday! Whether you side with the PSOE or the PP, take the PSOE’s advice and pelea por lo que quieres!