Granada, Spain always has and always will hold an immensely special place in my heart. Since my first month-long visit as a high schooler in 2006, I’ve been enamored by the city’s beauty and character, and so I’ve returned time and time again. Last month, I belatedly celebrated my 30th birthday by visiting Spain for two weeks, and there was no doubt Granada had to be on the itinerary. 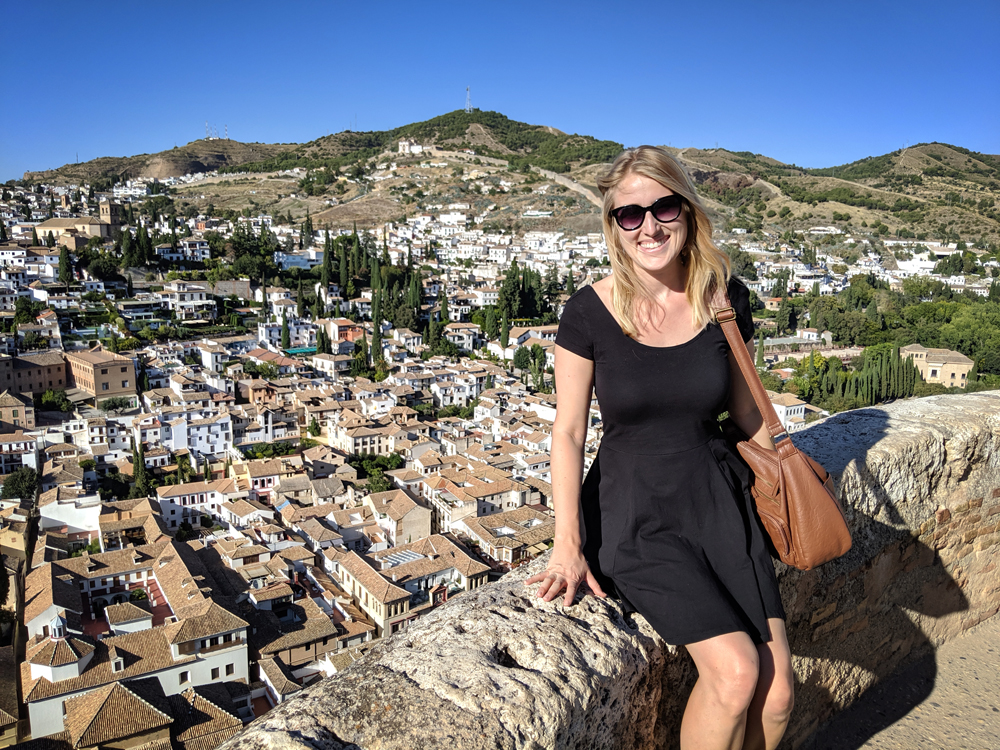 The view from Granada’s Alhambra

Granada is known throughout Spain and the rest of its world for its promise of free tapas with every drink you order. My previous visits to Spain were all on a tight budget, so, naturally, I’ve always been a big fan of Granada’s culinary scene. I’ll admit, though: I had little idea what the city’s cuisine had to offer beyond free food. How better to expand my gastronomic horizons, then, than a Granada food tour? Spain Food Sherpas‘ Taste of Granada Food Tour seemed like the perfect choice.

We met our tour guide Katia in the city center and learned she grew up in Russia but fell head over heels in love with Granada and hasn’t looked back since. I’ve found that expats are often the best tour guides, as they’re brimming with passion for their chosen city, and Katia was no exception. She immediately jumped into sharing historical and cultural tidbits about Granada, many of which were brand new to me despite my multiple visits. As we waited for Spanish siesta to wrap up and shops to open, we paid a visit to an extravagant church, La Iglesia De La Virgen De Las Angustias, which was gearing up to celebrate the city’s patron saint day. 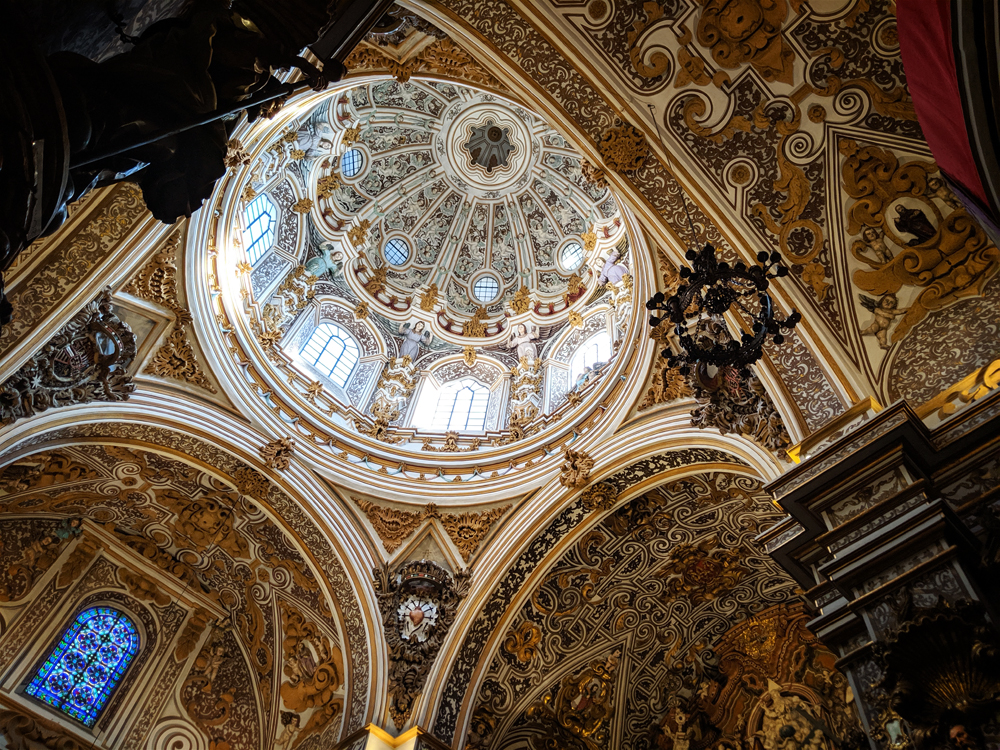 If there’s one food you have to try on a visit to Spain, it’s the ever-ubiquitous jamón—sorry, vegetarians. You’ll see legs of ham hanging in just about every bar, and the meat dominates any true Spanish menu. And I’m not talking about your grandma’s Christmas ham or your bland processed ham sandwich. I’m talking cured ham bursting with flavor, every second of the pig’s life planned out to produce the best quality meat. Jamón is Spain’s answer to prosciutto—but ten times as delicious.

So it was fitting that we kicked off our tour at Ibérica, a shop specializing in wine, cheese, and, of course, jamón. There, we learned about what terms like serrano, ibérico, and pata negra mean when it comes to ham and what species and diets are Spain’s most desirable. I’ll take just about any old jamón over what you’d find in the U.S., but these were on a whole other level. We also learned about the art form of ham-slicing and were mesmerized by the shopkeeper’s skills. 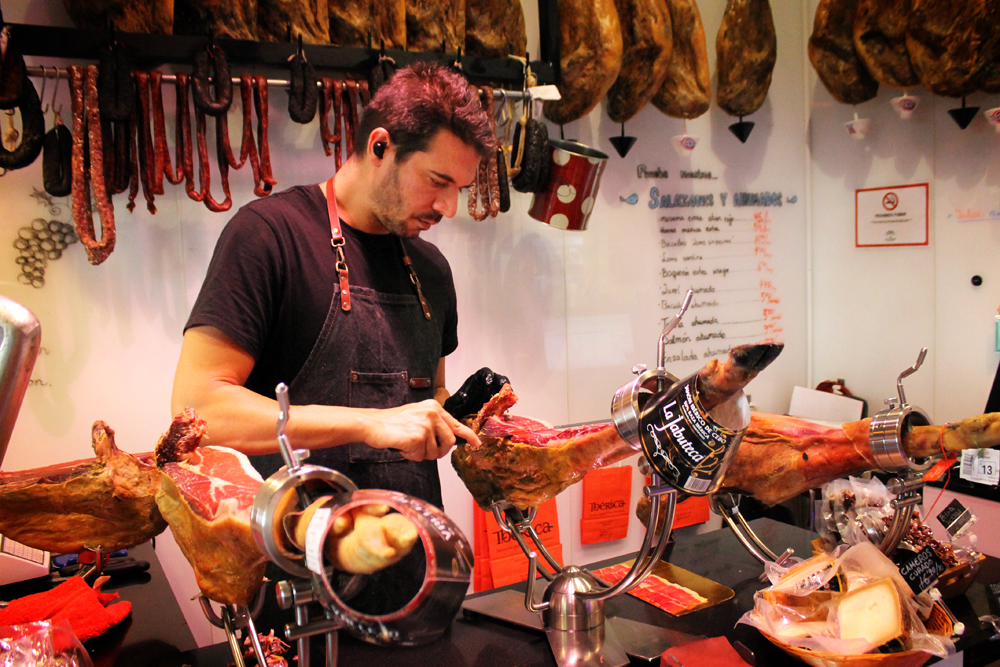 Some of Spain’s best ham

From there, we headed to a shop called Andalucía Delicatessen, where we tried a few award-winning olive oils, cheeses, and chocolates. Jamón may be the first food I associate with Spain, but olive oil is a close second. Spain is the world’s leading producer of olive oil (that “Italian” olive oil you have in your kitchen? Probably grown in Spain and bottled in Italy), and olive oil is a lot like wine when it comes to the variety of taste and quality. 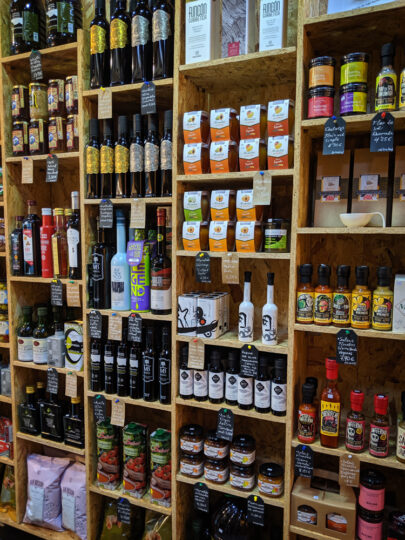 Free tapas, cheap kebabs, bocadillo sandwiches, and fast food were usually my fare of choice on previous Granada trips. I knew absolutely nothing about fine dining in the city, so I was thrilled to venture into it on the food tour. Michelin Guide-featured Restaurante Alameda was the perfect place to begin. We started with an amazingly smooth glass of albariño white wine that even my red wine-exclusive boyfriend loved. Then we tried a few of their modern takes on traditional Spanish dishes: salmorejo and bull tail croquettes. 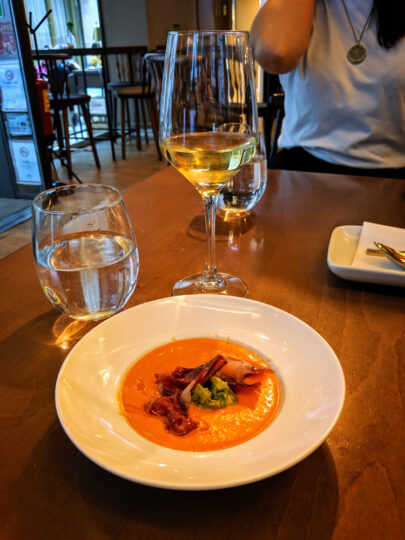 Salmorejo is gazpacho’s creamier, thicker cousin, a cold, garlicky tomato soup topped with hard-boiled eggs and, of course, ham. I went crazy for salmorejo on this trip, eating it six or seven times in thirteen days, and the very best salmorejo of the trip? Easily Restaurante Alameda’s with its unique secret ingredient: mango. And that was followed up by, no doubt, the best croquettes of the trip, consisting of bull tail, perfectly fried, and topped with ham. 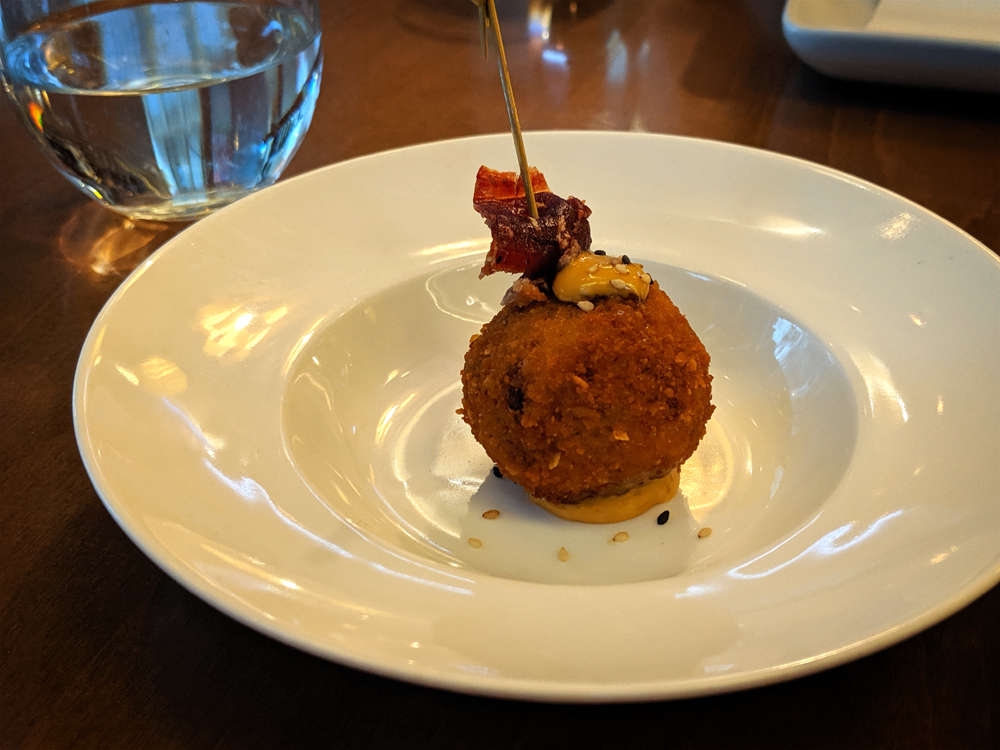 We’d already tasted more delicious food in one day that we could imagine, but there was more. Before our next restaurant, we made a detour to Oliver, a small shop that has continuously been selling dried fruits and nuts since 1850. There, we admired the colorful selection, tasted a few of Oliver’s offerings, and noted the antique wines lining the shelves. 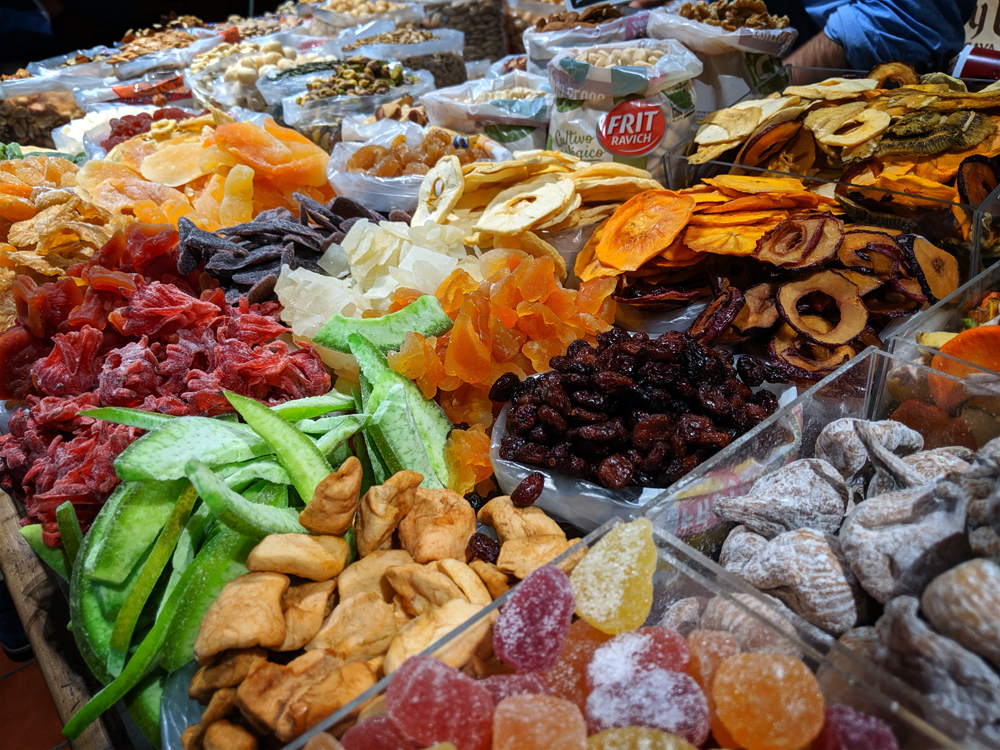 What’s a day in Spain without a wine or two (or five)? At the cozy Taberna Más que Vinos, we tasted some of the country’s best red wine as the sun set. And since we were in the free tapa capital of the world, it came served with olives and slices of marinated pork. 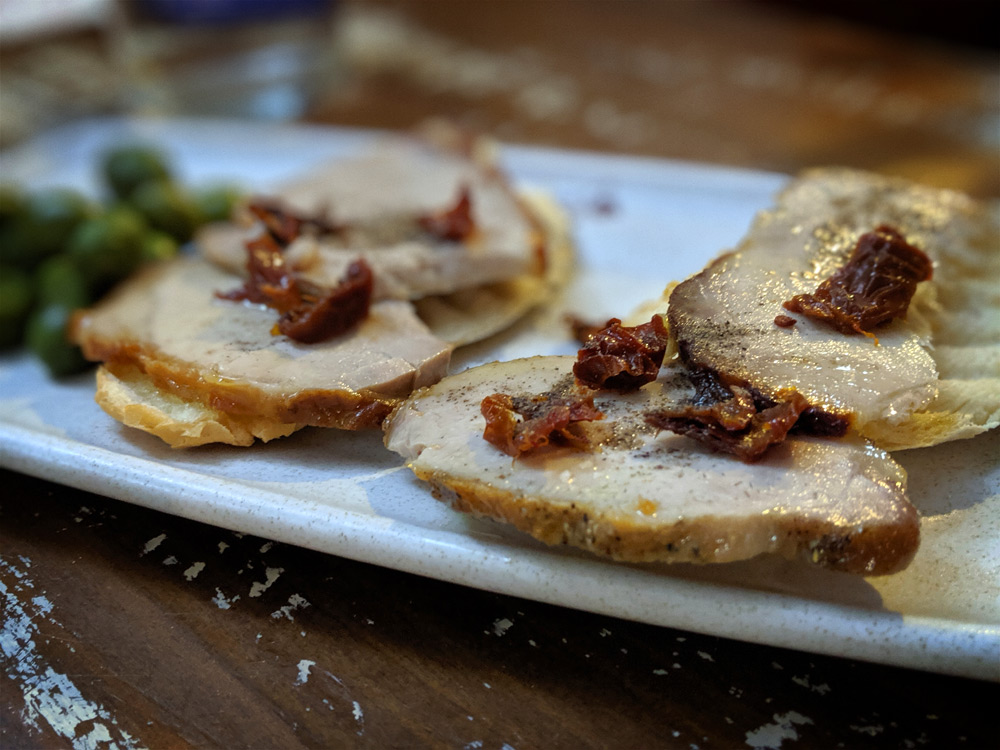 From there, we reached our final stop of the night, the historic Restaurante Chikito. Though Chikito only opened in 1976, its building dates back to 1910 and previously housed Granada’s Alameda Café, a popular hotspot for local intellectuals like poet Federico García Lorca and composer Manuel de Falla. And we even had the opportunity to dine with el Señor García Lorca himself! 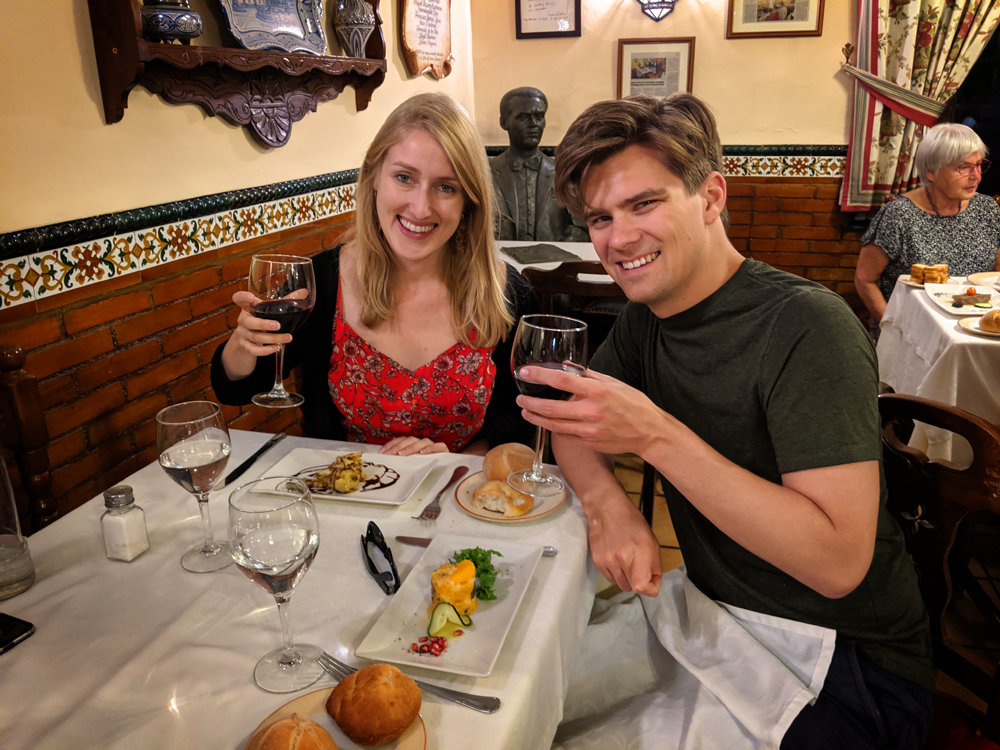 At Chikito, we tried Granada’s traditional salty bread, then while my boyfriend tasted a cod and shredded orange salad, I opted for marinated artichoke. We followed that with García Lorca’s favorite dish, a tasty asparagus soup, and a Granada pastry specialty, piononos. Katia shared a few more useful tips for touring the city, left us with a pocket guide to Granada’s best restaurants, and then bid us adiós as we meandered home full and happy. 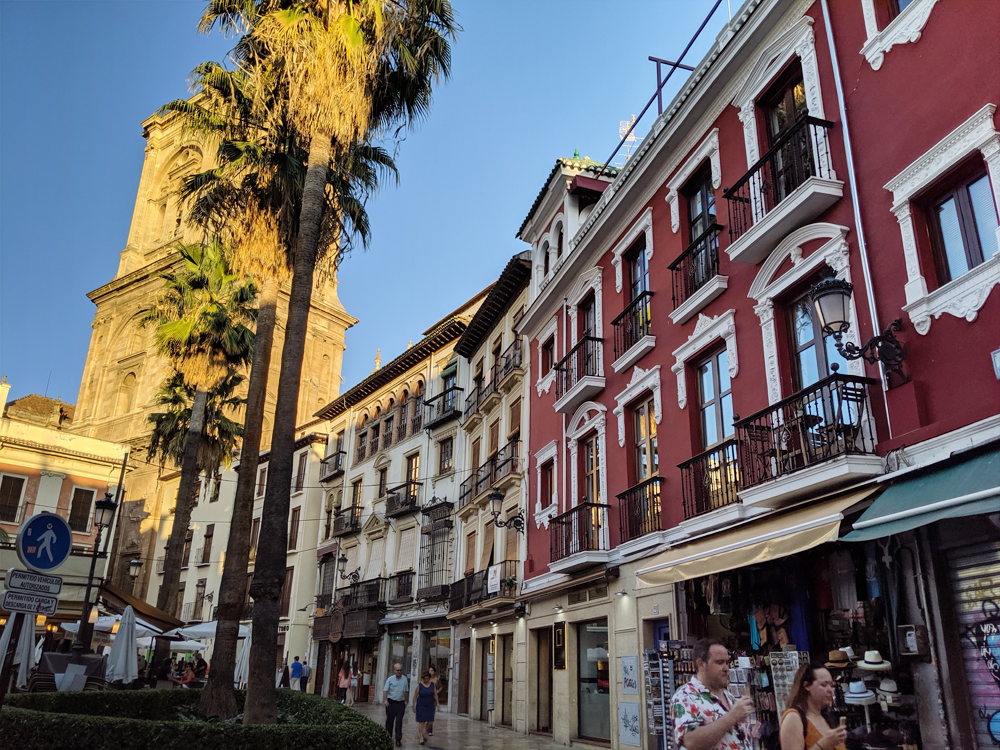 Passing Granada’s cathedral at sunset while on the tour

Spain Food Sherpas’ Taste of Granada Food Tour was a dream come true, the perfect way to kick off our visit to the incomparable city of Granada. Katia’s love for her city and its cuisine were abundantly clear, and we had a fantastic time exploring with her. Whether you’re an experienced food connoisseur or a casual diner like me, I highly recommend embarking on a food tour while in Granada—and now I can personally vouch for Spain Food Sherpas and Katia. In the words of our dinner companion Federico García Lorca, “Granada is the perfect dream and fantasy, forever ineffable,” and I couldn’t agree more. Go taste it for yourself.

I was hosted by Spain Food Sherpas, but all opinions are entirely my own, as always!