If there’s one thing most visitors to Malaysia rave about after visiting, it’s the food. My first few days in Kuala Lumpur demonstrated just why, and an evening of tasting the local cuisine with Food Tour Malaysia had stood out as one of the best experiences I’d had in my five weeks of traveling so far. But my taste buds were just getting started, and I was in luck. From Kuala Lumpur, I was heading several hours north to a state that has a reputation for being an absolute food paradise, Penang.

Aside from its world-renowned cuisine (did you know Lonely Planet named Penang their top culinary destination for 2014?), Penang is also popular due to its capital city and UNESCO World Heritage Site, Georgetown. Founded by British settlers in 1786, the city boasts well-preserved colonial buildings in addition to colorful street art and a unique blend of Western and Eastern culture – plus a great selection of places to stay. Check out some of Penang’s best areas and accommodation or ideas for first time visitors. By day, I wandered Georgetown’s historical streets, but night was when the real fun started: after the raging success of my experience with Food Tour Malaysia in Kuala Lumpur, I was ready to taste more with their Penang tour.

Looking to stay in Malaysia a little longer? Check out Ellie’s post on why Georgetown is a fantastic digital nomad destination! 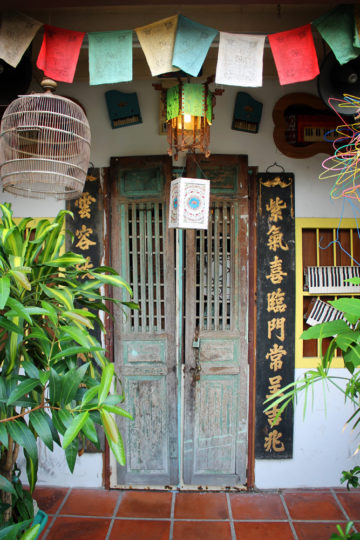 Call me a weakling, but, I have to say, after a day exposed to Penang’s sun, heat, and humidity, being chauffeured around town in Food Tour Malaysia’s air conditioned van was quite the luxury. Our first destination was a restaurant that seemed nothing more like a hole in the wall but had a line wrapped around the block. Fortunately for us, our guide sat us down, and, within minutes, we were tasting our first food: laksa, a spicy fish broth with rice noodles, vegetables, and fish. I have a complete aversion to fish and seafood, but, when in Malaysia, right? I gave it a try, and, though it wasn’t my cup of tea, I can see it being fantastic if you’re a fish fan. 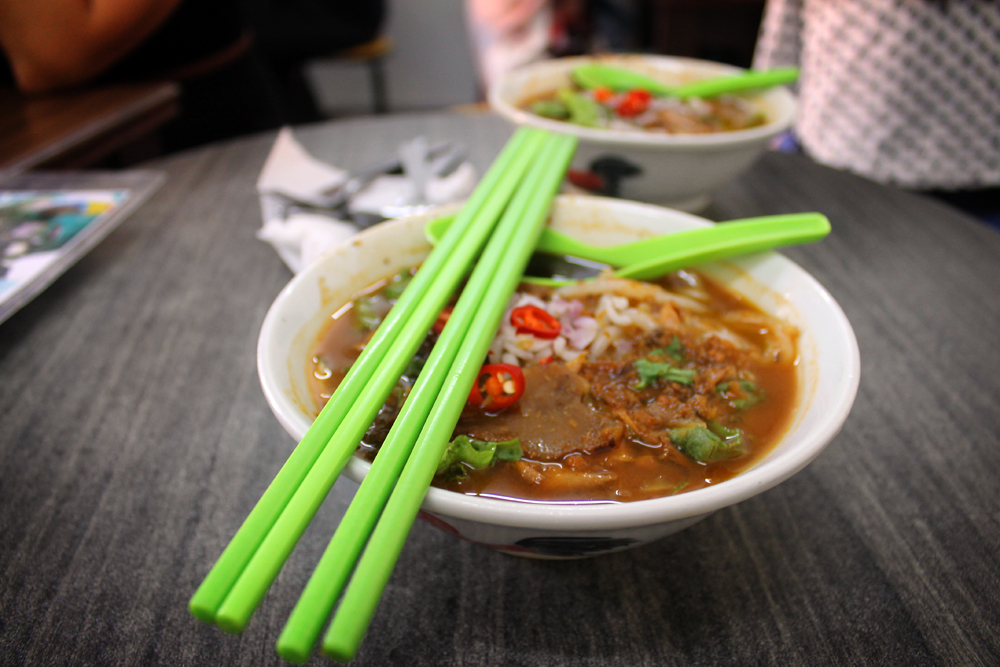 Not to worry, though, because our laksa was paired with what became my favorite thing I tasted in all of Malaysia: chendul. This refreshing dessert soup consists of coconut milk, noodles, kidney beans, and shaved ice, which, yes, sounds pretty darn strange, but I couldn’t get enough! 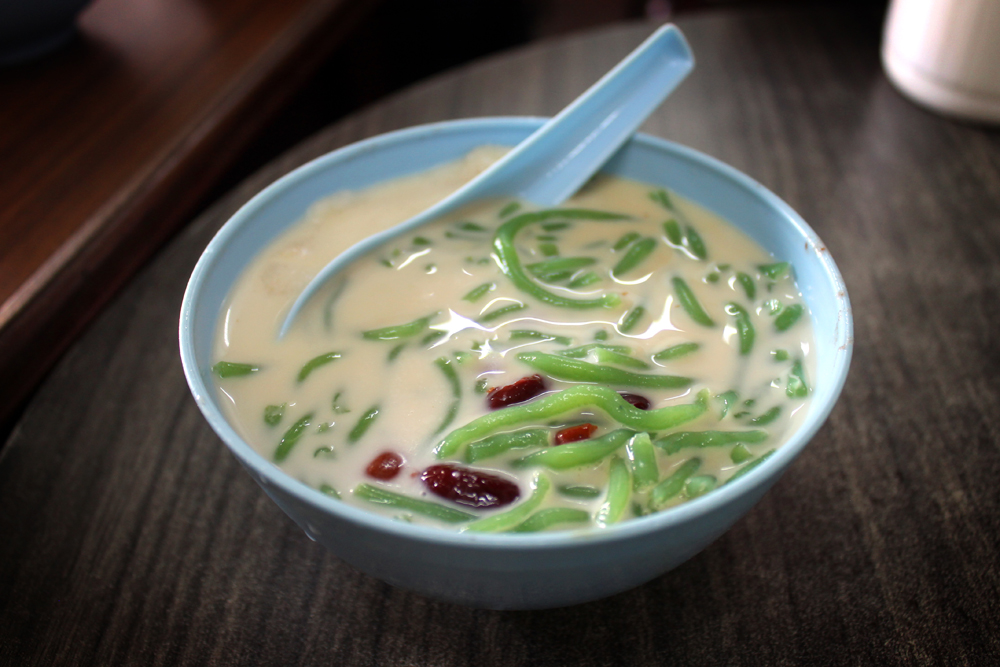 Some of Georgetown’s most interesting attractions are its clan jetties. These six jetties and their accompanying stilt houses and temples were built in the late nineteenth century and are named for the Chinese immigrant clans that inhabited them. Today, they’re photogenic tourist hotspots open to the public. They still maintain some local authenticity, though, and our guide brought us somewhere you would definitely never find in any guide book: a rudimentary shack alongside a jetty that sells impressively inexpensive fried foods to local fishermen. Here, we tried Malaysia’s version of pork, vegetable, and shrimp tempura. What a find! 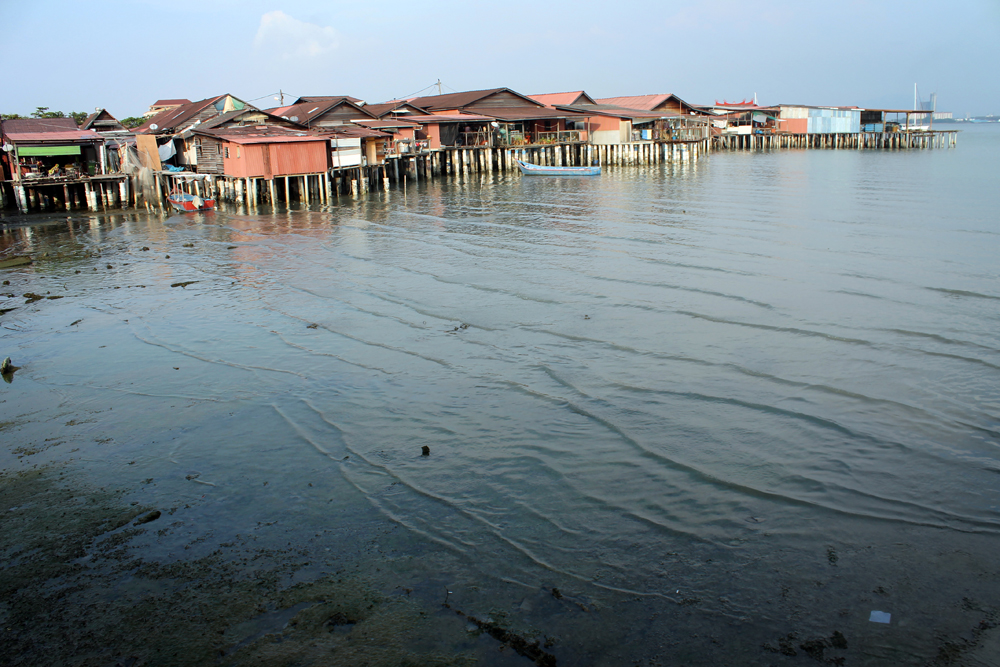 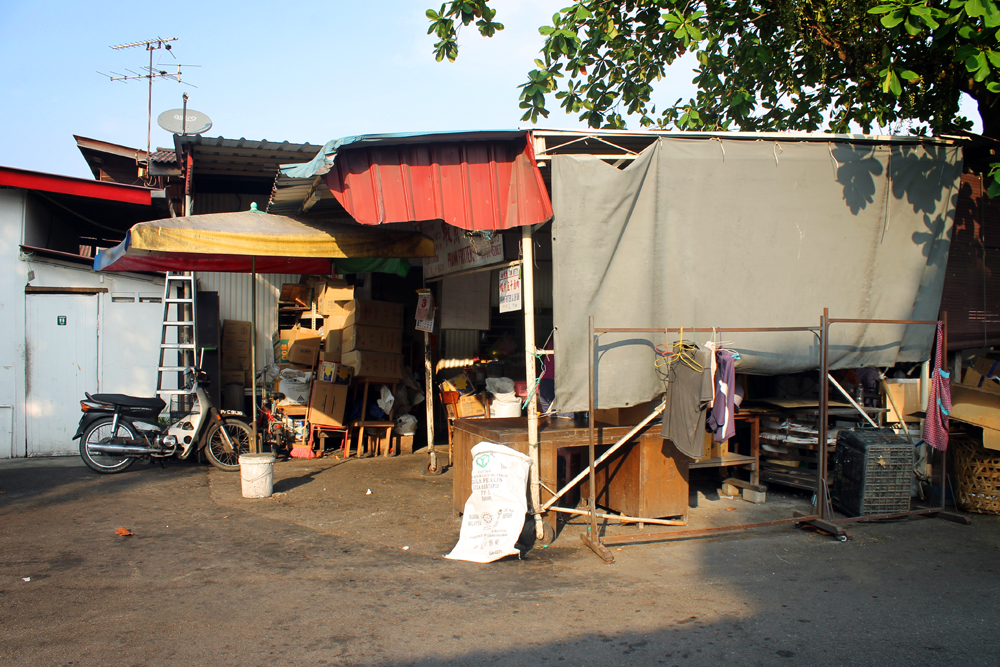 Bet you wouldn’t expect to find much in the way of delicious food here!

If you’ve been to Singapore, Hong Kong, or Malaysia or tried their cuisine, you may have heard of hawker food, and Penang is also famed for specializing in this. But what, exactly, is hawker food? Its origins lie in vendors that pulled food carts around the city, selling inexpensive food from door to door. Slowly, this practice died out and became replaced with open-air markets featuring a variety of hawker stalls selling snacks, produce, meals, desserts, and drinks. You can’t go to Penang without trying its hawker food, so Food Tour Malaysia brought us to an off-the-beaten path hawker market beneath a housing development, where we were the only non-locals in sight. 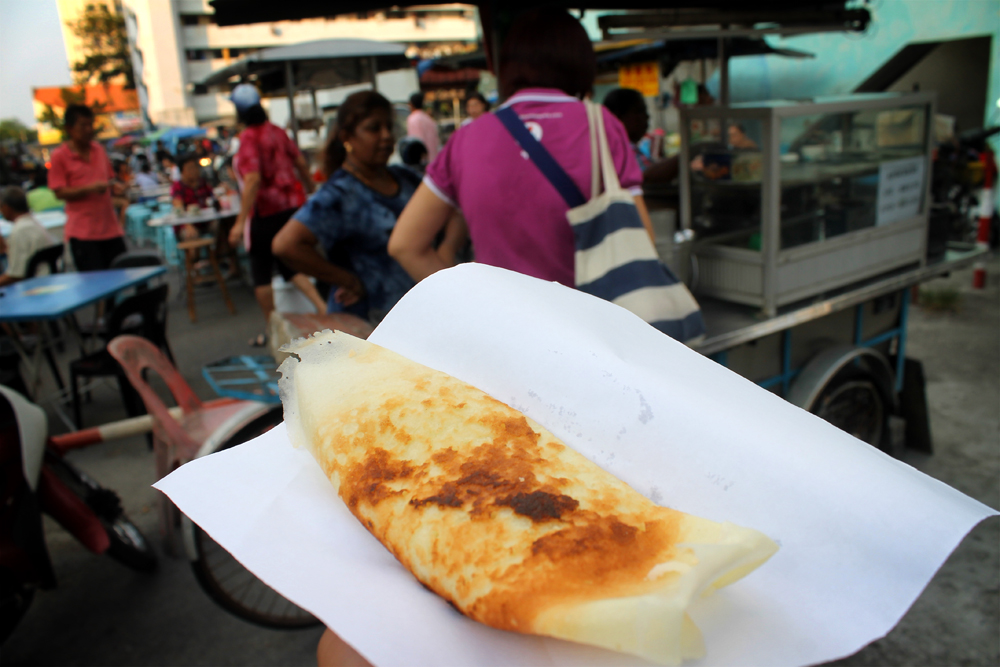 Here, we began by sampling an icy soy drink with grass jelly — which we drank from bags! — before tasting rose apple. My eyes were transfixed by a stall selling all sorts of colorful pastries and desserts, and we tasted a few of these, as well as an apam pancake. By now, I was certain I couldn’t eat anything more for weeks, but there was more to come, and how could I pass that up? 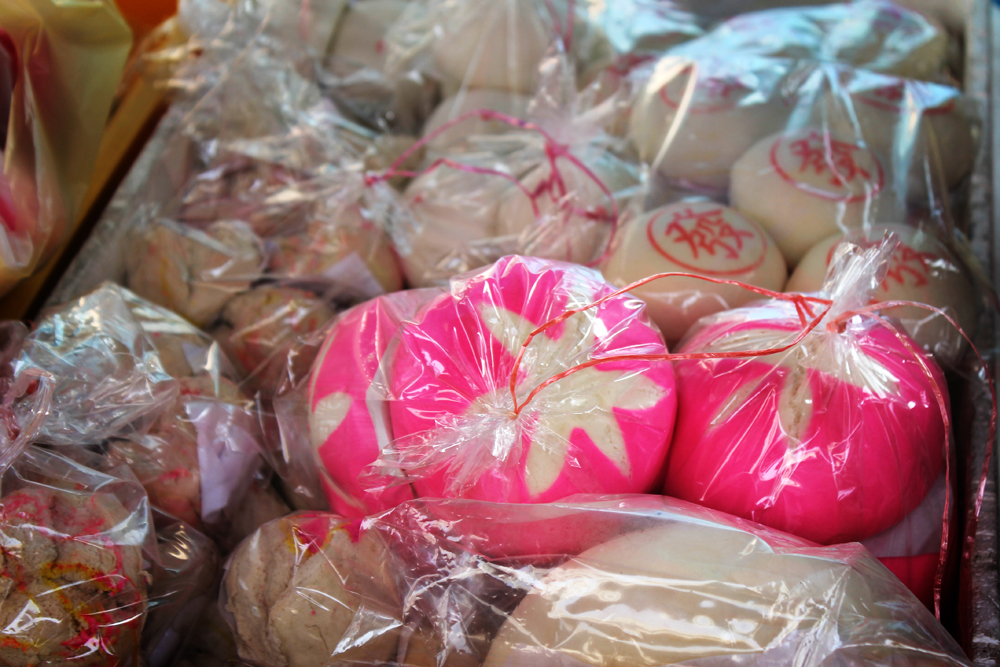 Next up: a sampling of Penang street foods. Our group shared a half dozen dishes so we could taste a little of everything from noodles to soups to fried chicken to dumplings to pohpiah rolls, some of Penang’s finest culinary offerings. Afterward, we strolled through the street food stalls to see these dishes being prepared. 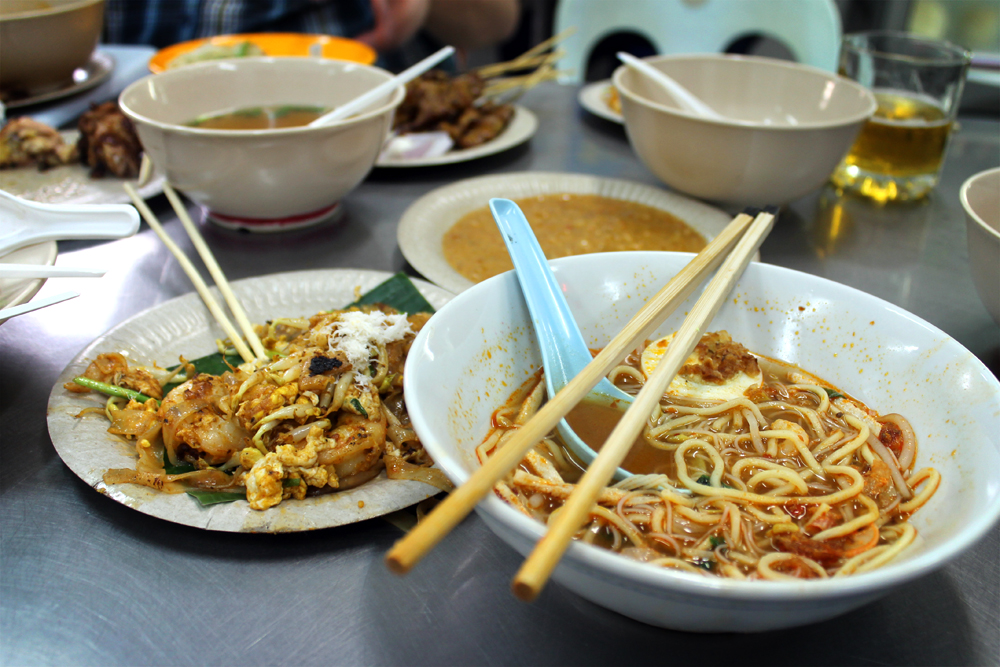 As I learned in the Kuala Lumpur food tour, Malaysia is a hybrid of Malay, Chinese, and Indian cultures, and this is prominently reflected in their cuisine. So it was fitting that our last stop of the evening was at a Malaysian Indian vegetarian restaurant, where we had the opportunity to try various curries, sauces, and roti/breads, as well as a popular Malaysian drink, teh tarik. Teh tarik translates to “pulled tea,” as the mixture of black tea and condensed milk is repeatedly poured back and forth from one cup to another, making a delicious sweet treat. 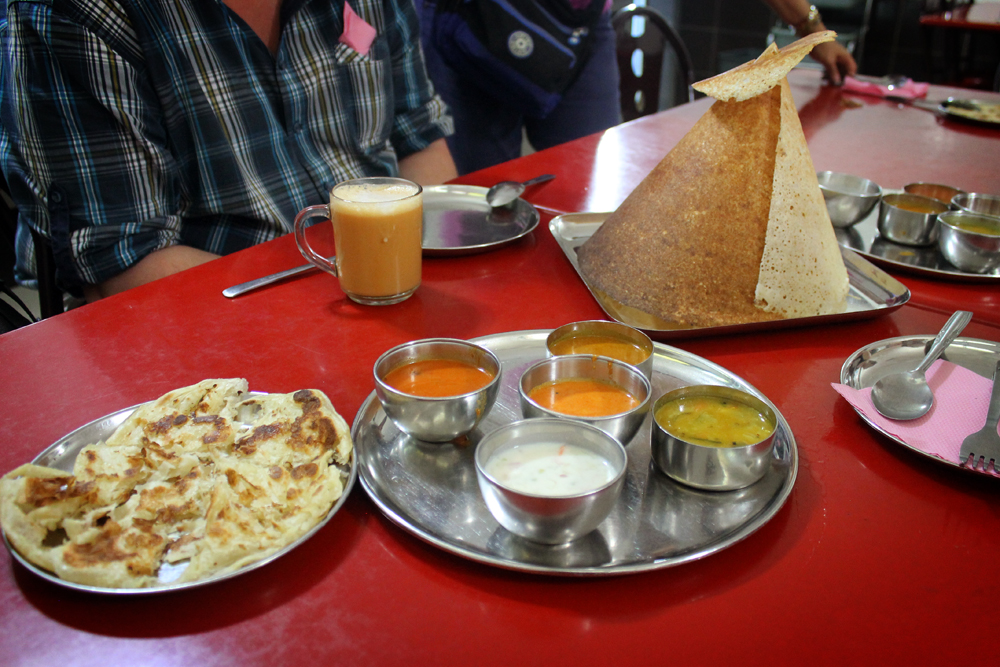 And with that, the night came to an end, stomachs full and hearts warm. Any trip to Malaysia should involve as much sampling of different foods as possible, but, when traveling, it’s all too easy to fall into the trap of sticking to the same old tourist traps every guide book recommends. Food Tour Malaysia dove deep into local culture so I could taste the Penang’s culinary specialties as a true local would. New friends, new sights, and new flavors: what more could you need for a perfect night in Penang?

Disclaimer: I was a guest of Food Tour Malaysia, but all opinions are entirely my own, as always.