It was hard not to feel like I was on top of the world when I woke up in rural Bolivia on November 8th, 2016—and not just because I was 14,000+ feet above sea level. Nothing could wipe the smile off my face, not even the knowledge I’d spent the previous day vomiting up street food on a rickety bus in front of a group I was desperate to make a winsome first impression on. Nine months into my backpacking adventure around the world and four weeks into the South America leg of it, I’d decided to take a break from exhaustively planning every detail of my travels and do something I’d previously scoffed at: join a three-week tour. 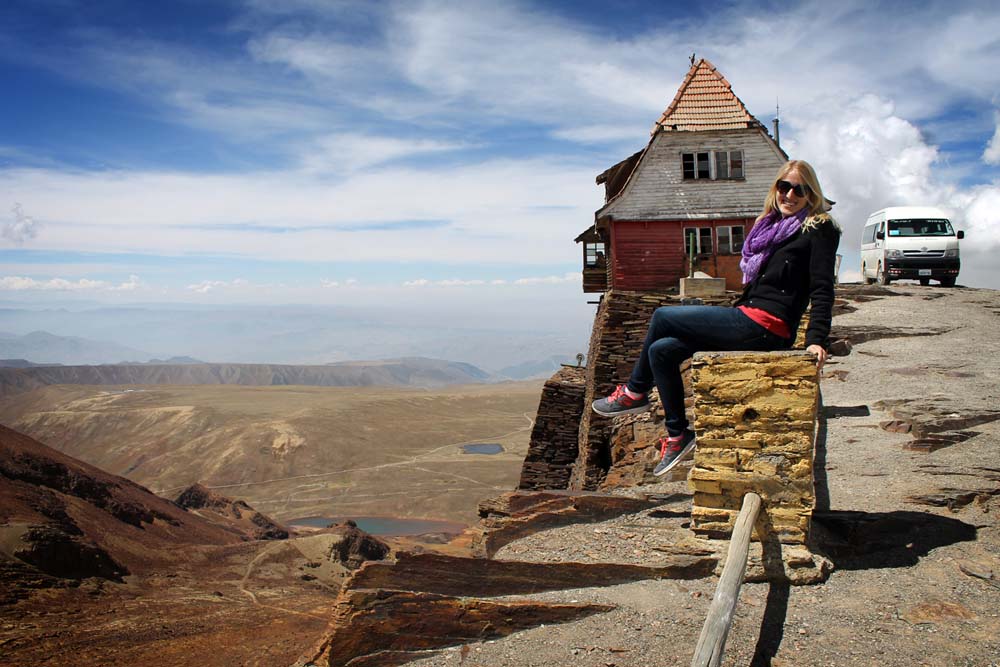 Chacaltaya, Bolivia. Day one of the tour I scoffed at, and it was already paying off.

The obnoxious “I’m a traveler, not a tourist” I was at the time figured I could easily plan and book everything myself. But after nine months of non-stop travel and saying goodbye to new friends every few days, I was tempted to research tours. And when I found a laid-back overlanding trip that would take me from La Paz, Bolivia to Buenos Aires, Argentina with a million alluring stops along the way, I was sold. It turned out to be three of the best weeks of my life, and I’m long overdue for a blog post recounting that journey. But that’s another story for another time.

On November 7th, I’d just met the group of twenty or so travelers I’d be spending those next three weeks with, and I was looking forward to getting to know them on a five-hour bus ride from La Paz to the small Andean village of Livichuco. What I didn’t anticipate was that the freshly squeezed strawberry juice I’d purchased from La Paz’s Mercado Lanza would come back and haunt me. All while stuck on a bus for five hours, crammed in with the people who’d have to put up with me for every minute of the next three weeks. 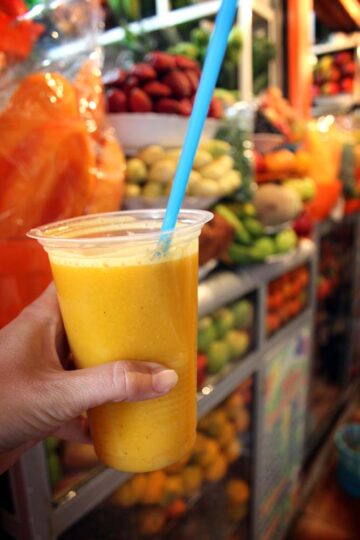 The mango juice I bought from the same stall the day before was so good I had to go back for more. Who knew how it would betray me?

But let’s not dwell on that! The good news is we got to Livichuco, I buried myself under thick, alpaca wool blankets, and I waited it out. And as I did, my fellow travelers could not have been any kinder to me. Checking in on me, bringing me tea and snacks, cheering me up with stories and laughs. So when I woke up on November 8th feeling a million times better than the day before, I was elated to put the food poisoning in the past, grateful to my generous tour companions, and enthusiastic about exploring that day’s destination, the silver mining town of Potosí. But most of all, as I repeatedly reminded everyone in the group who would listen to me, I was euphoric that this was the day the United States would elect its first female president and everything would change for women everywhere. 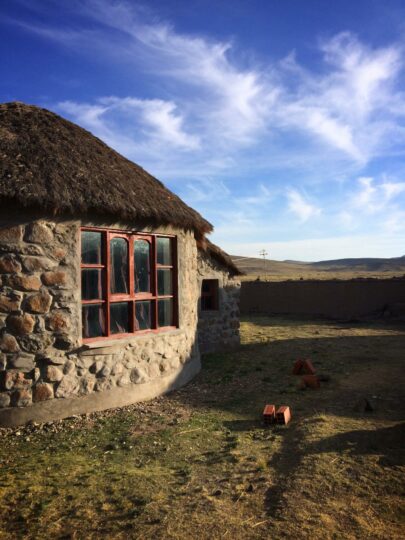 The cozy homestay where I recovered

Aside from one other American, the group consisted of Europeans, Australians, Kiwis, and South Africans, so none were nearly as enthralled by the election as I was. Everyone, though, was well aware of the day’s significance and eager to ask me questions about U.S. politics. I did my best to serve as their American ambassador and giddily invited everyone to the Election Night party my tour roommate and I would be hosting in our hotel room.

Potosí definitely impressed. After a lovely café lunch, some of us met up for a mine tour, where we wandered through a real, working mine and learned all about how silver mining is done in Bolivia. Back at the hotel, I rearranged my room’s furniture to make space for the entire group to watch Hillary Clinton be declared the next president of the United States. We all headed out to dinner about the time the first polls were closing, and I’m sure I spent the whole meal nervously chatting my new friends’ ears off. I remember practically skipping through the streets on the way back from dinner, passing colorfully lit buildings and musicians rehearsing for an upcoming festival. My excitement could not be contained. 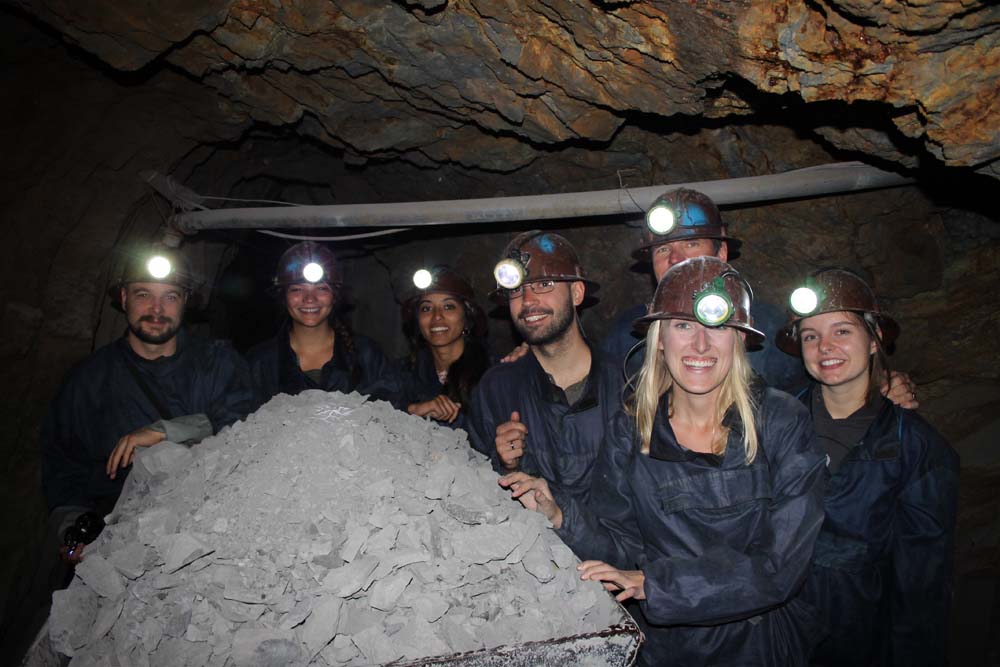 When we entered the hotel, where the one TV was already tuned to CNN International, a new headline was scrolling across the screen. It looked like Trump was going to take Florida. My mood threatened to do a 180, but I had to remain optimistic. CNN hadn’t yet made an official projection, and anything could still happen. Besides, Hillary could still win the Electoral College even if Florida went red, right? 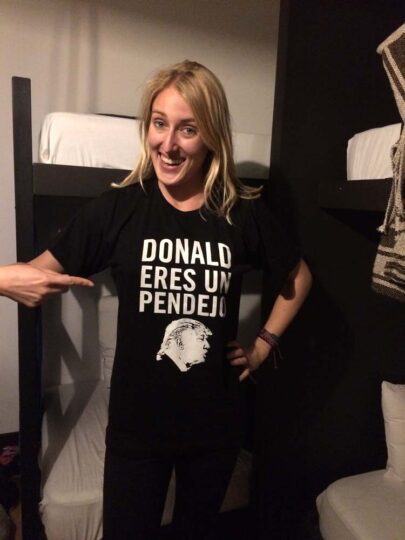 We never made it to our hotel room. Those of us who chose to stay and watch the results couldn’t take our eyes off the TV for long enough to leave the lobby, and so a hotel lobby in Potosí, Bolivia is where I spent the next 6-8 hours watching the horror unfold. (By the way, I found out months later that Malia Obama also spent Election Day in Bolivia.) By the time 2am rolled around, it seemed like it was a done deal for Trump, and most of the group had drifted off to bed. But I just kept thinking that any minute now, CNN would realize they had miscalculated everything, and Hillary would be declared the winner. I had to cling on to some sort of hope. I sat in stunned silence, ignoring the jokes of a non-American guide who hadn’t yet realized the serious implications of a Trump victory. Not until 5 or 6am did I finally return to my room, crying myself to sleep and achieving about one hour of rest before our scheduled breakfast.

Part of me was terrified to meet the group for breakfast the next day. Would they laugh about Trump’s victory? Would they act like nothing had happened? But walking into breakfast was like walking into a funeral. All were morose, and as one of the two Americans in the group and the one who hadn’t stopped talking about the election since they’d met me, everyone approached me and offered their condolences as if I’d just had a family member die. At least I was too exhausted to start crying again at their kindness. 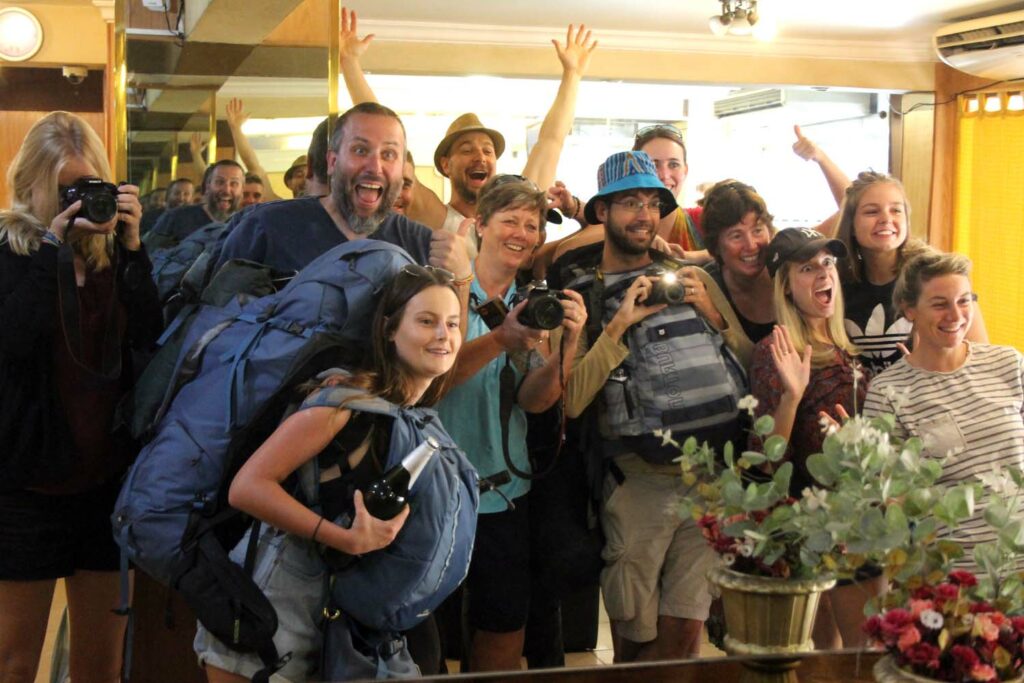 Some of those wonderful, kind group members in happier times

One of the guides, who was from South Africa and who I imagine had personally witnessed his fair share of civil unrest, sat me down and suggested I avoid telling anyone I was American for the rest of the trip. He was genuinely concerned that locals could physically attack me as retribution for the horrible things the new president-elect had said about Latin Americans. As justified as their fury would have been, nothing like that wound up happening, but what kind of new world were we living in where this was something to even consider?

I did somehow find a way to disconnect from the devastation that day, whether that was because I was too tired to think, because of my immense privilege as a straight, cis, white person, or because I was in denial about the full ramifications of a Trump presidency. I’ve forgotten much of November 9th, perhaps because I was running on one hour of sleep, but we traveled from Potosí to Uyuni that day, stopping along the way at an abandoned mining town that completely captured my imagination as an incredible playground for adults. And the day after that, I even remember tearing up with joy as we drove across the otherworldly Uyuni Salt Flats, music blasting, possibilities endless in my remote corner of the world, so far from the realities of U.S. politics. 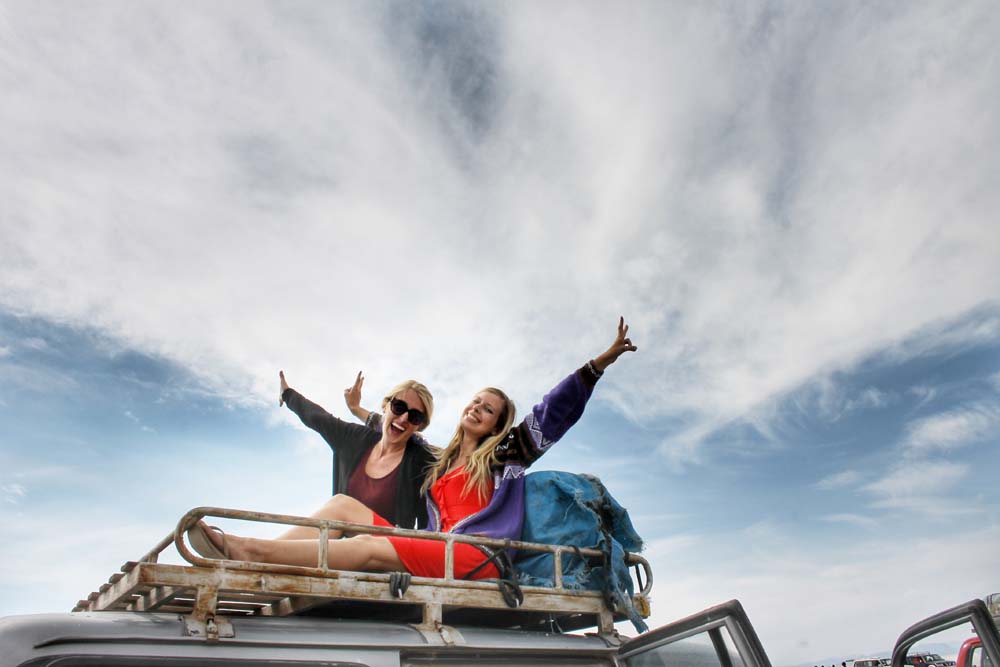 While writing this post, I stopped to look back through photos from my La Paz to Buenos Aires tour, including other people’s albums that I hadn’t seen in nearly four years. And I was awestruck by how deeply happy and carefree I look in all those photos. And I was! Knowing what I know now about everything that’s happened since then, it’s strange to realize most of those photos were taken in the weeks after the 2016 election. I’m not entirely sure how to reconcile it.

As devastated as I was in the early morning hours of November 9th, 2016, if I’d known all the pain, suffering, and death Donald Trump would cause over the next four years, I don’t know how I would have made it through that trip at all, much less with the sheer amount of joy I felt. I don’t mean to be callused about it or disregard all of the people whose lives have been ripped apart by the Trump administration. But I acknowledge how fortunate I was to be able to enjoy that naivete for a little while longer and make some unforgettable memories before Inauguration Day. 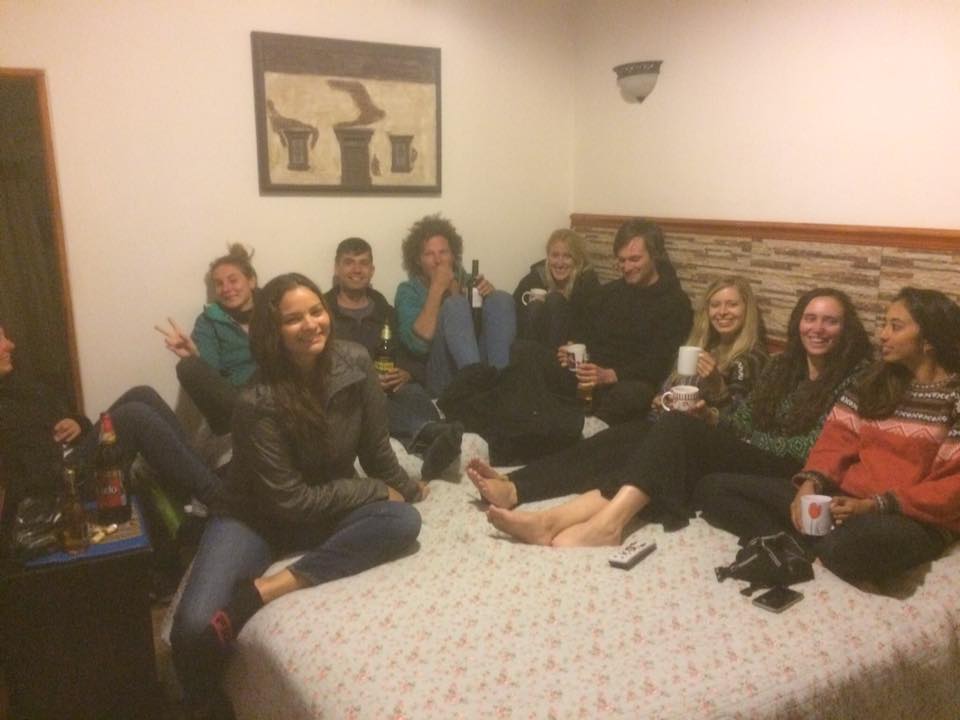 The photo quality isn’t there, but the love I still feel for all these people and these moments still is. (Photo taken by one of our guides on one of my favorite nights, in San Pedro de Atacama, Chile.)

As we rapidly approach the 2020 election, I pray that Election Night (or whenever the results finally come in) brings us all joy, relief, and peace. While a socially distanced couch in Studio City, California is a far cry from the breathtaking sights of Bolivia, I’m eager to watch the results unfold, and I’m cautiously optimistic things will change for the better. To all my U.S. readers, please, please, please vote, tell everyone you know to vote, and volunteer however you can (here’s my post with ideas and resources for election volunteering). For many of us, wherever we were at the time, November 8th, 2016 wound up being one of the biggest letdowns of our lives. Let’s not let that happen again.