2012: Another Travel-Filled Year In Review

I’ve been extremely fortunate in my 23 (almost 24, gasp!) years of life to travel all over the world. With 2012 at an end, it’s time again to reflect on this past year and all the fabulous opportunities I’ve had.

January
I kicked off the year at home in California, where I spent a wonderful two weeks reconnecting with friends and family, eating mountains of American food, and visiting all my favorite Los Angeles spots. But soon, I headed back to my beloved Spain to finish my year of teaching in Villarrasa and rediscover beautiful Sevilla. 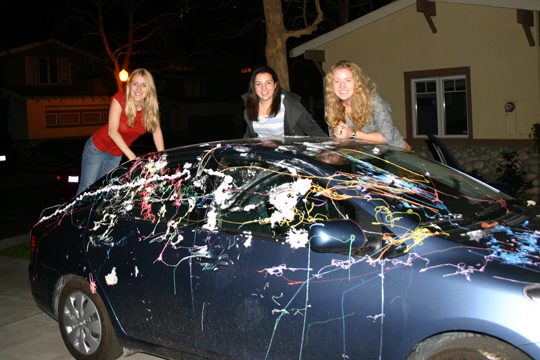 The aftermath of my favorite New Year’s Eve tradition: driving down the Rose Parade route and getting silly stringed, marshmallowed, and shaving creamed by those camping out for the parade.

February
I ventured to nearby Cádiz to celebrate Carnaval, basically an absurd, giant, costumed botellón near the beach. Not exactly the most cultured trip I’ve taken, but fun nonetheless. Later in the month, we took a road-trip to Extremadura, a less popular region of Spain that I ended up adoring, visiting the cities of Cáceres, Guadalupe, Trujillo, and Mérida. 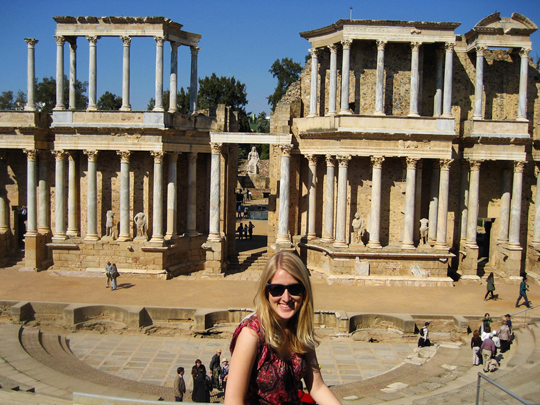 Just chilling with some ancient Roman ruins in Mérida

March
In March, my mom and sister visited me in Sevilla, and, after showing them around my city, we traveled to Gibraltar, the British territory in the south of Spain. We also traveled north to my current home, Madrid, which served to cement my love for the city and pump me up for my year ahead there. March’s travels didn’t stop there: I also flew to Galicia and saw Santiago de Compostela and A Coruña, and I finished the month by beginning our spring break trip to the fabulous Istanbul, Turkey! 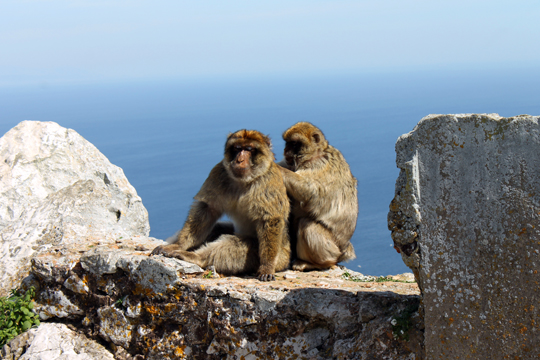 Hanging out with two of Gibraltar’s gazillion wild monkeys

April
April began in Istanbul, which I adored, and I even got to check off another continent for the year (Asia), the fifth continent I visited in eight months. I didn’t dare leave Sevilla at the end of the month, because it was time to celebrate Feria! 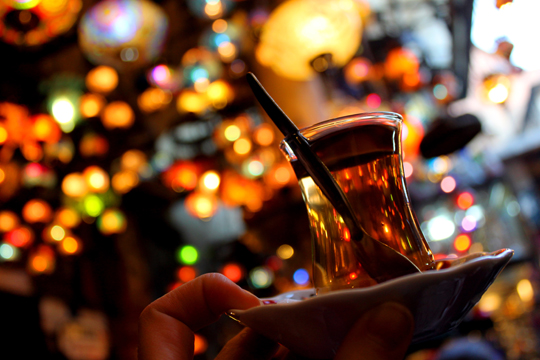 How I remember Istanbul: lots of tea and pretty lights in mysterious settings

May
Early in the month, I took my second (free!) trip to the beautiful Lagos, Portugal. For my birthday, I ventured to the equally beautiful towns of Marbella and Ronda in the Málaga province. And at the end of the month, we returned to Málaga to embark on a two-week Central European journey. 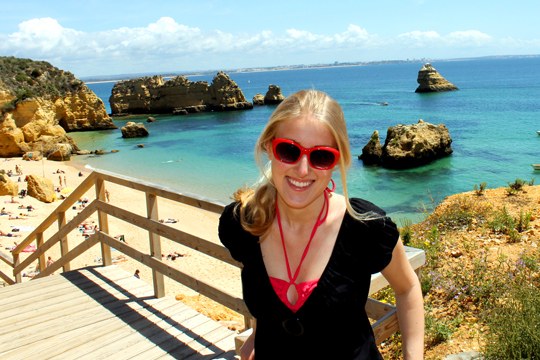 June
Our Central European trip took us to six cites in six countries: Wrocław, Poland, Berlin, Germany, Prague, Czech Republic, Vienna, Austria, Budapest, Hungary, and Bratislava, Slovakia, an amazing trip about which I still owe you a few blog posts. After that trip, I returned home sweet home for the summer but soon thereafter took off with my mom for a weekend in Washington, D.C., where my sister was living for the summer, and a stop in Baltimore, Maryland.

July
July saw a one-night trip to Las Vegas with many of my best friends from high school. I’ve been to Vegas a million times, but there’s always something new to see and do. A few days later, I drove north to Folsom, California (near Sacramento) to visit a friend. We also took a day trip to Napa Valley, a gorgeous area I had never been before, obviously with fantastic wine, where we saw Ray Davies of The Kinks in concert. The traveling continued later in the month with our annual, much beloved trip to the Colorado River in Parker, Arizona. 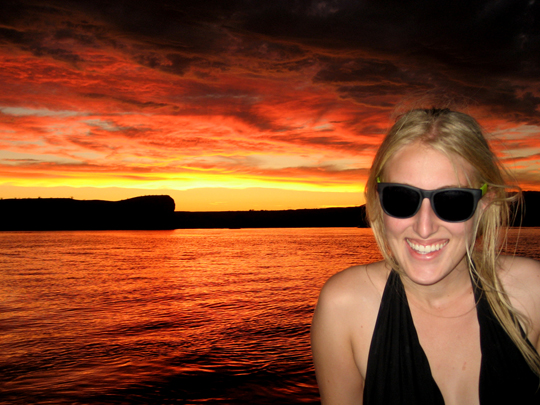 We witnessed the most amazing sunset of my life on the last day of this year’s River trip. This photo is darkened a bit to compensate for the flash but otherwise not enhanced. It was seriously unbelievable.

August
In August, I joined my family for a few days in San Diego and ended that trip reuniting down there with study abroad friends. I also drove up to San Francisco to pay a visit to my best friend. 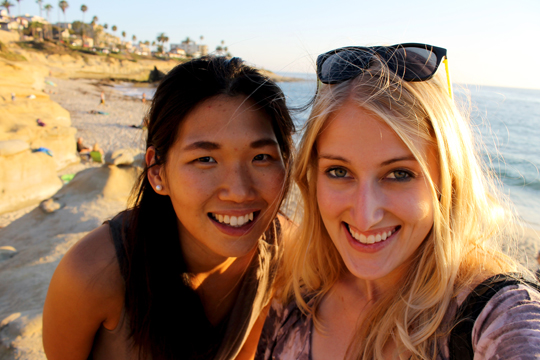 On the beach in La Jolla, San Diego with one of my study abroad friends

September
I spent the rest of Labor Day weekend in San Francisco, getting another chance to see more of Napa Valley, and realizing just how much I want to live in San Francisco eventually. I finished my last few weeks at home, and then back to Madrid I went! 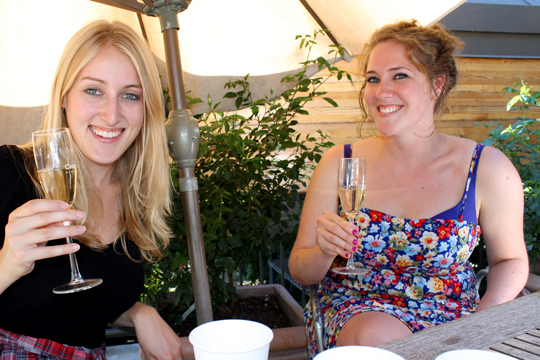 October
It didn’t take long to settle in to Madrid, and a few weeks later, I set off on a road-trip to Asturias in the north of Spain, where I fell in love with the region (and the food and cider!), including the cities and towns of Oviedo, Gijón, Llanes, Ribadesella, Llastres, Tazones, and Covadonga. 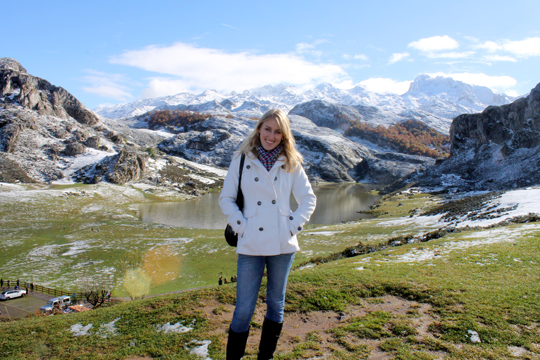 Lagos de Covadonga, easily one of the most beautiful places I’ve ever been

November
In November, I took a day trip to Toledo, which I had visited previously but enjoyed re-exploring. The following weekend, I headed down to my old home of Sevilla for, well, technically a business trip, during which I absolutely fell back head over heels in love with the city I had grown a bit tired of last year. Next up: a trip to London to visit my sister who spent her semester studying there and my dad, stepmom, and little siblings who were visiting her, We even took the Chunnel into Paris for a day. Finally, I ended up the month with another trip to London. I know, I know, London twice in a month is overkill, but this time my mom was visiting my sister there, so of course I took the two-hour trip back. 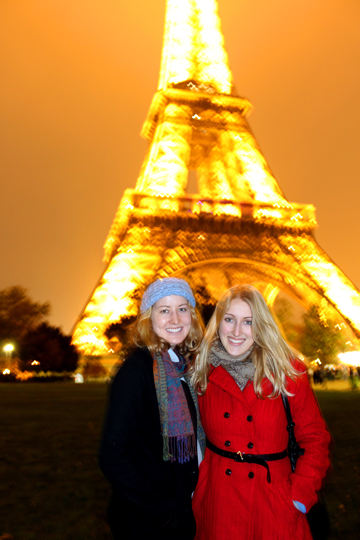 My sister and I looking ghostly at the Eiffel Tower

December
The second of this year’s London trips continued into December, and we also ventured into Oxford for a day, a charming town I hadn’t seen before. A few weeks later, I was excitedly boarding a plane back to California to spend the holidays with friends and family at home, where I’ll happily be until Sunday. 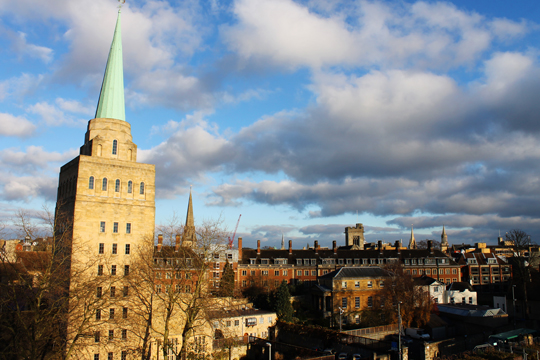 The sun finally coming out in Oxford

Without a doubt, 2012 was fantastic, filled with memories I’ll cherish for a lifetime. Luckily for me, the travel will continue in 2013! I’m headed back to Madrid in a few days, and I already have a trip to Menorca planned for late January, a trip with my mom to Southern Italy planned for Easter week, and I’m sure there will be tons more excitement to come!

How was your 2012? What was your favorite memory, travel or otherwise, from the year? What are you most excited for in 2013?