I don’t know how it happened, but, somehow, four years have passed since I embarked on my two years of teaching English in Spain as an auxiliar de conversación. Though not every moment was perfect, they were genuinely the two most wonderful years of my life, and there’s not a day that goes by that I don’t feel at least a twinge of nostalgia for that chapter. If I could jump in a time traveling DeLorean and leave 2011 Kirstie a letter, here are eight things I’d tell myself about teaching in Spain.

Your students will, at some time or another, drive you up the wall.

While I can’t compare Spanish classrooms to those in other countries, I do know that my students – at their worst, at least – could be rambunctious, disrespectful, and stubborn. Many auxiliares arrive with no training in education and quickly realize just how difficult classroom control can be. You’ll also notice that discipline styles and students’ attitudes toward teachers in Spain can be a world apart from those in your home country.

You’ll find yourself wanting to pull your hair out, but tranquila. You’ll be fine.  Remember that, as a teaching assistant, you are not primarily responsible for discipline, and, while you may not remember your own classmates ever being nearly so noisy, it’s simply a different style of education. 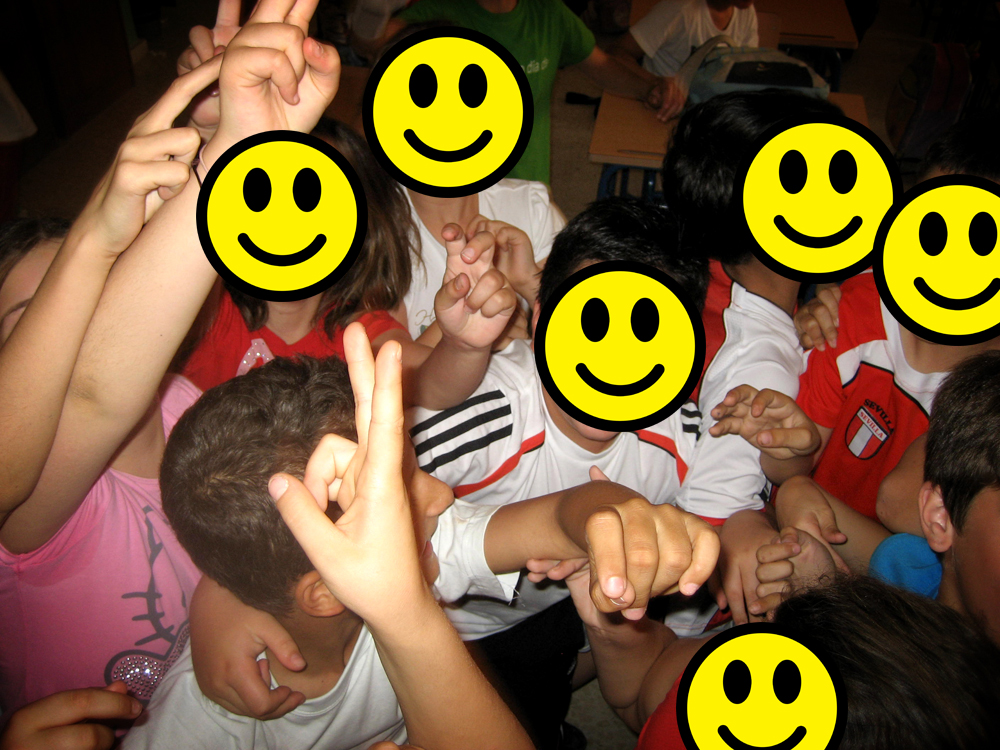 No shortage of energy from these kids!

But you’ll also fall madly in love with  these kids.

Yeah, students can definitely be snotty brats (often literally – give it a week before you hear, “¡TEE-CHAIR, TENGO MOCOS!”), but, before you know it, you’ll realize you’ve learned to love these kids as your own. Showering you with cards and drawings on your birthday, making you glow with pride when they master a lesson, initiating group hugs when you’re feeling homesick…

Who knows if I’ll ever see them again, but I’ll never forget the preschoolers who trapped me in hugs every time I had to leave the classroom, the former sixth grader who still updates me on how well he’s doing in English, or the immigrant first grader who didn’t speak a word of English or Spanish at the beginning of the year and could outspeak fluent adults in both languages by the end.

These little punks will worm their way into your heart. Can’t you just take them all with you when you leave? 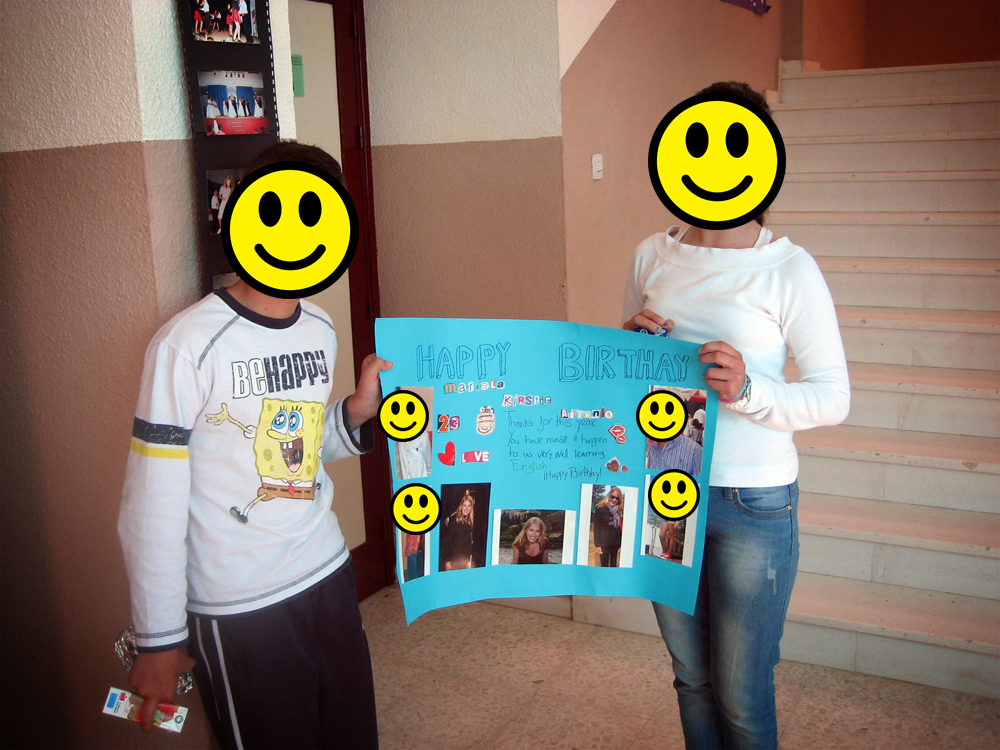 A birthday gift from Antonio and Mariela. “Thanks for this year. You have made it happen to us very well learning English. ¡Happy Birthday!” ♥

Be patient with the program and country

If there’s one skill you’ll learn during your time as an auxiliar de conversación, it’s patience. Patience with rowdy kids (as mentioned), patience with a program that is far from perfect, and patience with a country very different from your own.

You may not be paid on time, there may be miscommunication about your schedule, banks may drive you insane, and you may not be able to get a straight answer on anything from anyone in the government, but you’ll be okay. Yes, teaching in Spain can present a wide variety of frustrations, and those can be especially disheartening when you’re far from home, but you will get through each and every one of them, I promise. And there’s nothing that a tub of Nutella can’t solve.

Travel when you can, but also enjoy your own city.

Perhaps my favorite aspect of the auxiliares program was having three day weekends every weekend, which were often extended to four or even five day weekends because of Spain’s hefty number of public holidays. On top of that, travel within Europe is tantalizingly cheap, so you’ll have the opportunity to become a real jetsetter while you’re teaching in Spain. Take advantage of it! This is your time to adventure abroad.

However! Returning to Madrid as a second-year auxiliar, I couldn’t figure out why so much of the city was unfamiliar to me after spending a year studying there a few years prior. Then I realized that, as a student, I had spent the majority of my weekends traveling instead of getting to know Spain’s capital. So, while I would recommend traveling like crazy, I also urge you to take some weekends off and really get to know your own city. As tempting as the rest of Europe is, Spain is absolutely amazing, and I promise you’ll adore all there is to explore in your new home. 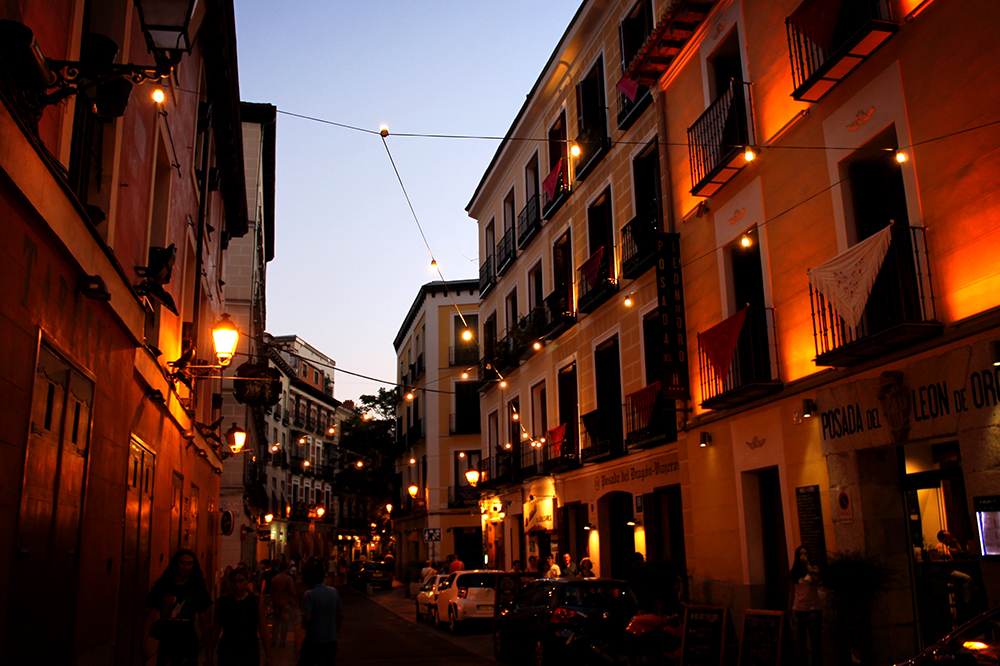 Exploring Madrid on my last day in the country

Teaching at its best can be incredibly fulfilling, but you’ll also only be working twelve hours (sixteen hours in Madrid) a week, and not every moment as a teaching assistant is exactly stimulating. (Try asking, “What is your favorite color?” two hundred times a day.) Travel, socializing, and getting to know your city will fill your time, but I’d also suggest finding a hobby, internship, or second job to focus on.

For me, that involved doing a part-time marketing gig on the side. As a bonus, having that experience in my field really helped me with my post-Spain job search. For others, it’s focusing on your blog, taking Spanish classes (or trying a third language!), joining a sports team, or signing up for dance lessons. It will serve as an anchor, help you decide what you want to pursue after Spain, and keep you engaged.

It’s okay to have English speaking friends, but meet locals too.

It’s easy to fall into the trap of only socializing with fellow English speakers. While many travelers would advise against this, I firmly believe that having friends who speak your own language is a must when living abroad. When you’re far from home, you need something familiar, people who understand your jokes and traditions and can help you through tough times. Don’t shun fellow foreigners altogether. Many of my favorite people in the entire world, who absolutely made my experience abroad what it was, are Americans and Brits I met in Spain. 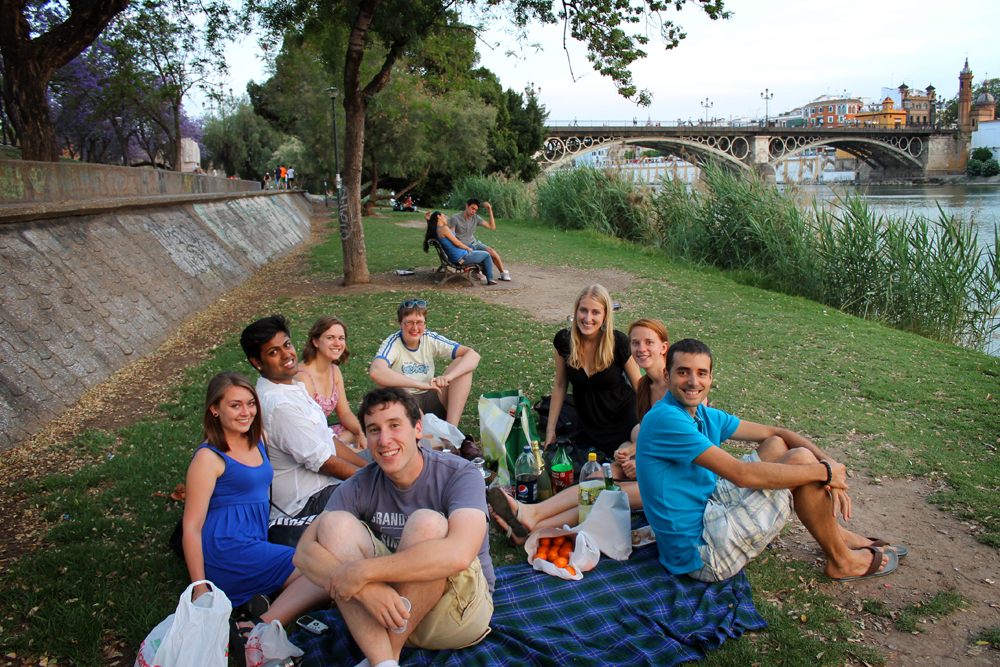 That said, do make a point of getting out there and also meeting Spaniards or other non-English speakers! Making friends with locals can be challenging, especially in towns where it’s common to stick with the same group of friends since childhood. However, even if you don’t become fast bffffs with Spaniards, you can still build up a group of great acquaintances with whom you can improve your Spanish and learn the intricacies of Spanish culture.

Don’t be afraid to spend a bit of money!

I was absurdly tacaña as an auxiliar – and with good reason; it’s not like you’re earning an impressive salary – but allow yourself to enjoy your earnings every once in a while! I’m proud of myself for saving almost half of what I earned in Spain, but I also wish I hadn’t frequently said no to that second glass of €2 wine or turned down pricey museum entry fees. You’re probably never going to be living this lifestyle again, so enjoy it to the fullest.

That said, 100 Montaditos is a godsend.

I don’t care if 100 Montaditos is chock full of guiris and if my love for it makes me the guiriest guiri of all the guiris. €1 mugs of tinto de verano and mini sandwiches on Euromanía nights (Wednesdays and Sundays) are a gift from heaven. [Update: A reliable source has informed me of the tragic news that jarras are now €1.50.] And if you’re lucky enough to be in a city with Copas Rotas, their €1 selection is also divine. Go there at every chance you get.

Youuuu shall not paaasss… up this offer.

So there you go. If you’re a former auxiliar, what other things would you tell your past self? If you’re a newbie about to begin your time as an auxiliar, enjoy every moment of it. You’re in for an incomparable year.