Double the Love from My Lovely Readers

I’m honored to have been nominated by both Kristina at Seize the Globe and Betty at The Pumpkin’s Head for a Liebster Award! The award may basically be a chain letter, passed on from blogger to blogger, encouraging them to forward it to others, but, while I’ll refrain from begging you to send an email to your entire address book to avoid being eaten by a zombie with no eyes, I do support the cause of appreciating fellow bloggers’ work. Plus, answering questions about travel is always fun. 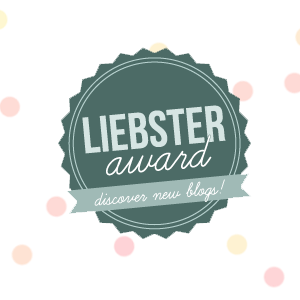 1. Do you prefer to pack well in advance (weeks) or the night before?

I typically procrastinate while packing! I will say, though, that I often make packing lists far in advance to make sure I don’t miss anything.

I’m currently in Sydney, Australia, where I’m living, working, and generally being a real person. I no longer have exciting trips across the continent planned almost every weekend like I did while living in Spain, but I regularly visit Newcastle (2-3 hours north of Sydney), and hopefully I’ll be able to use our three-day weekend in October to go somewhere new.

3. What is the goal for your travel blog?

I started this blog simply as a place to keep my family and friends updated while I was studying abroad in Madrid, but, slowly but surely, it’s begun attracting readers from all over the world. Hopefully I can continue growing this readership and bring people some of the joy and curiosity I get from reading other travel blogs.

Yes, I’m going with the obvious one here, but I have to say Europe. You all know how madly in love with Spain I am, but I love Europe for how easy and inexpensive it is to get around the entire place. Fly one hour, and you’re suddenly discovering an entirely different and fascinating culture. I’ve visited the majority of European countries and have fallen hard for most of them. 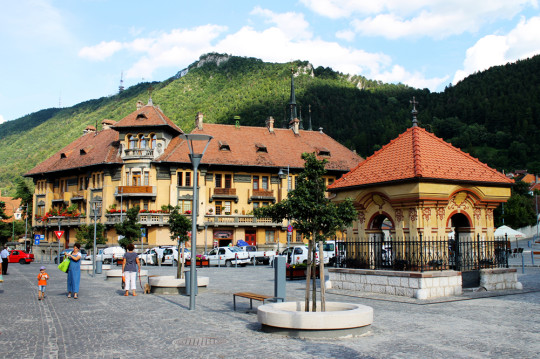 European country one of a gazillion I love: Romania

5. What is the most bizarre food you have ever eaten during your travels?

There’s no question about the fact that I am not an adventurous eater, so I can’t say I’ve eaten bull testicles or pig brains or anything of the like. I am reminded, however, of my first meal in Granada when I was there in high school. Our host mom prepared enormous bowls with one part soggy frozen vegetables to about three parts mayonnaise. Having just met her about an hour before, we were terrified to turn down her culinary creation and had to eat it all. So much for delicious Spanish food.

6. Do you prefer to solo travel, with a group, or just a single partner?

I see the merits in each, but I think traveling with a small group is my favorite way to travel. Easier to share meals, experience the nightlife, and share private hostel rooms, and the social dynamics are better.

When possible! I have manged to save up a lot of airline miles over the years, which funded a few of my trips that would have otherwise been expensive. My favorite experience with that was my flight to Sydney when I first came here in September, because I was able to fund it entirely with American Airlines frequent flyer miles and even throw in a three-day pit stop in Honolulu for the same number of miles. Hawaii and Australia for nothing more than $30ish in taxes? Yes, please. 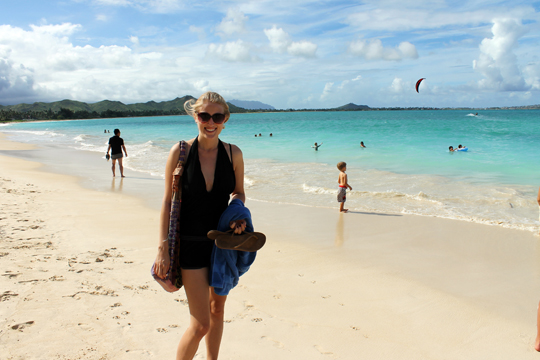 Free stop in Hawaii on the way to Australia

Returning from South America in 2011, my dad was able to use his airline miles (everyone should aspire to be my dad when it comes to racking up miles, by the way) to upgrade us to business class on the Miami to L.A. portion of our flight, meaning fully reclining seats, the world’s comfiest blankets, and heaps of free food and alcohol. I also have to say that some of my experiences with the miserable Ryanair were fabulous if only because I got to fly around Europe for sometimes less than €15 round-trip.

9. What is the best part about having friends all over the world?

The new worlds they open your eyes to. I’ve been able to travel extensively, but I’m familiar with even more places that I have yet to visit because of the glimpses into my friends’ lives they’ve provided me. It also means I’ve had to say goodbye to too many people, but I get to carry them around with me wherever I go.

10. What is your dream RTW itinerary?

I haven’t researched the stipulations of RTW tickets, but I’d start in New Zealand, exploring the country in a rental car for at least a month, then fly to Southeast Asia and see Vietnam, Cambodia, Thailand, etc., hopefully getting a chance to go up north to Korea, China, and Japan as well. I’d see India, then head to Eastern Europe and explore some of the towns I missed before visiting Scandinavia and returning to Spain for a while. Then I’d fly to South America, see as many countries as possible, and finish with a cross-country U.S. road trip.

11. Which flight search engine/tool do you prefer the most?

I usually use Skyscanner and Hipmunk (note from Kirstie: Hipmunk is now closed, but you can find alternatives here). I love Skyscanner’s option to search for flights from one location to “Everywhere” and Hipmunk has some interesting features. I’m most likely to book directly through an airline, if the price isn’t too different, but these sites are a good way to get ideas about where I can go. 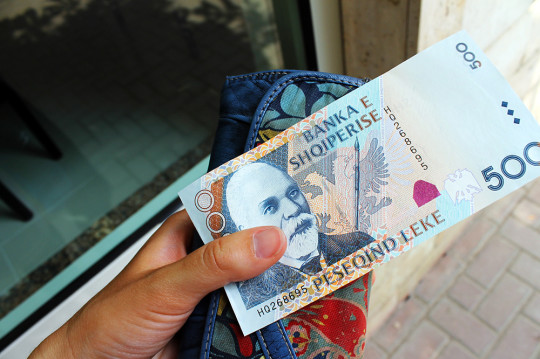 1. What places are you dying to see within the next five years?

New Zealand, since I’m so close. More of Australia, like Melbourne and Cairns. Southeast Asia, while I’m on this side of the world. Most of the countries in Central and South America, as well as Cuba. And, of course, I’d love to go back to Spain and the rest of Europe.

2. If you could live in another country/city that you haven’t before, where would it be?

I love the idea of either doing a working holiday in New Zealand or volunteering in somewhere like Nicaragua for a couple of months. I’d also love to live in San Francisco. I’m not sure where those would fit into my plans, but the fantasies are nice!

3. When did you first catch the wonderful illness that is wanderlust?

I was lucky enough to travel with my family a lot when I was young, but my first real bout of wanderlust was the result of a month studying in Granada, Spain when I was 17, my first taste of independent (i.e. without my family) travel. After that, I just couldn’t be cured. 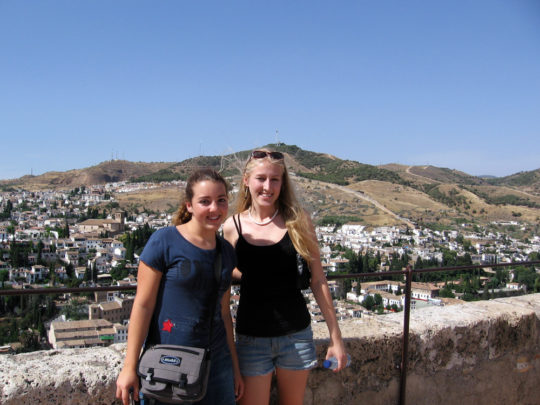 As a wee (squinty) one in Granada

4. What’s the one thing you cannot travel without?

A camera. I understand the importance of living in the moment rather than behind a camera lens, but I need to document everything!

5. What’s the scariest thing that’s ever happened to you while traveling?

I won’t go into too many details, but when I was traveling Macedonia solo, I met a group of people who did not turn out to be as nice as they initially seemed. Nothing bad actually happened (don’t worry, family!), but looking back on how easily they could have harmed me had they wanted to was frightening. I suppose we get into situations like that every day without realizing it, though.

6. What are your preferred lodgings: hotel, hostel, or vacation rental?

Hostels! I appreciate the luxury of hotels and have treated myself to one a few times in Australia, but staying in hostels gives you the true travel experience, saves you heaps of money, and introduces you to some great people.

7. Have you been somewhere that turned out to be completely different to what you imagined?

Yes. I suppose the Balkans were a good example of this. Although I had done enough research to know in advance that the area is gorgeous and tourist friendly, it still has a less than positive reputation from the conflicts in the 90s that does not do justice to how lovely it really is. 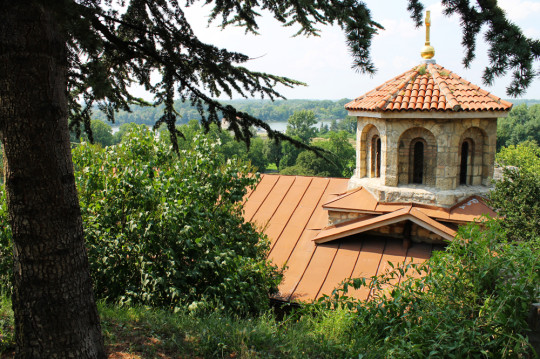 8. What’s the best airline you’ve ever flown with so far, and why?

I’m a big fan of Virgin (America or Australia) for its friendly customer service, TV screens, and, really, mostly because Virgin America’s planes look like a disco party.

9. What was the best night out you ever had while traveling?

It’s hard to pick just one, but I have to pay tribute to not one night out, but the week last August in which my travel buddy Lauren and I went out six of seven nights in a row (missing only one night for a flight) in Budapest and Madrid. For someone who’s more likely to stay up until 6am writing HTML than going to a club, that was rare for me, and it’s the one week in my life where I really, truly enjoyed, and even craved, going out. I was going through a lot of major, emotional life transitions at the time, so spending those scorching hot days sleeping until 2pm and staying out until 6am, meeting foreign strangers in Budapest’s ruin pubs, taking part in the vibrancy that is the streets of Madrid at 4am, and listening to far too much Ke$ha was probably exactly what I needed at that time.

10. What quote best summarizes your attitude towards travel?

I’d go with a more upbeat quote, but I saw this one again the other day, and it really struck a chord with me. 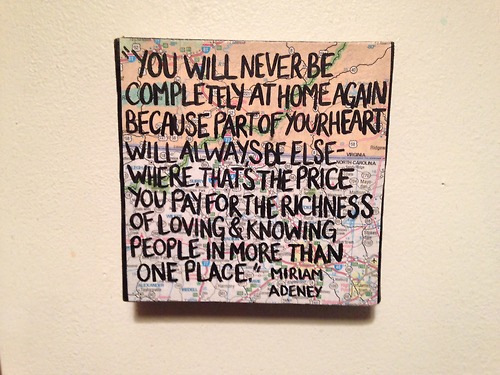 One set of rules specified these should all have fewer than 200 readers, while another set had no limit, so I’ll just go with ten of my favorites that haven’t yet done posted about the Liebster Award. I don’t mind if you prefer not to do a response post; just know that I appreciate your blog!

Questions for my nominees