It took me a lifetime of travel and 72 countries to realize this, but it turns out that one of the world’s most complex, vibrant, fascinating cities was right under my nose all this time. Los Angeles, I’m talking about you. Realizing I’d long taken my hometown for granted, last weekend, I embarked on a Downtown L.A. food tour to discover my city’s delectable cuisine and learn about our fascinating history. 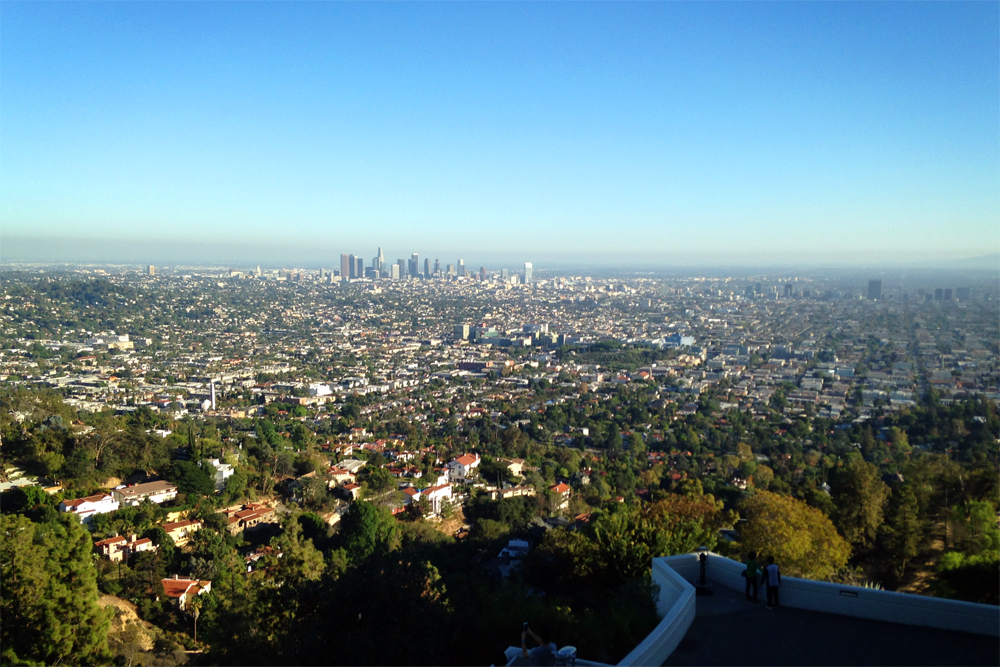 Overlooking L.A. from the Griffith Observatory

I’ve been a bit quiet lately about my current whereabouts, but, yes, the rumors are true: this serial nomad is settling down. I’ve returned to the U.S., I’m freelancing while job hunting (who wants to hire me?), and you know what? I’m really loving it. I didn’t expect to stick around in my hometown, but everything just started coming together, so here I am, a resident of the City of Angels once more.

As I’ve discovered since returning, you can take the girl out of travel, but you can’t take the traveler out of the girl. My days of living out of a backpack and hopping from one hostel to the next every few nights may be in the past, but I’ve returned home with the zeal for discovery I’ve developed over the years. And I’ve very quickly realized that this city that I always took for granted is actually chock-full of incredible sights to explore. 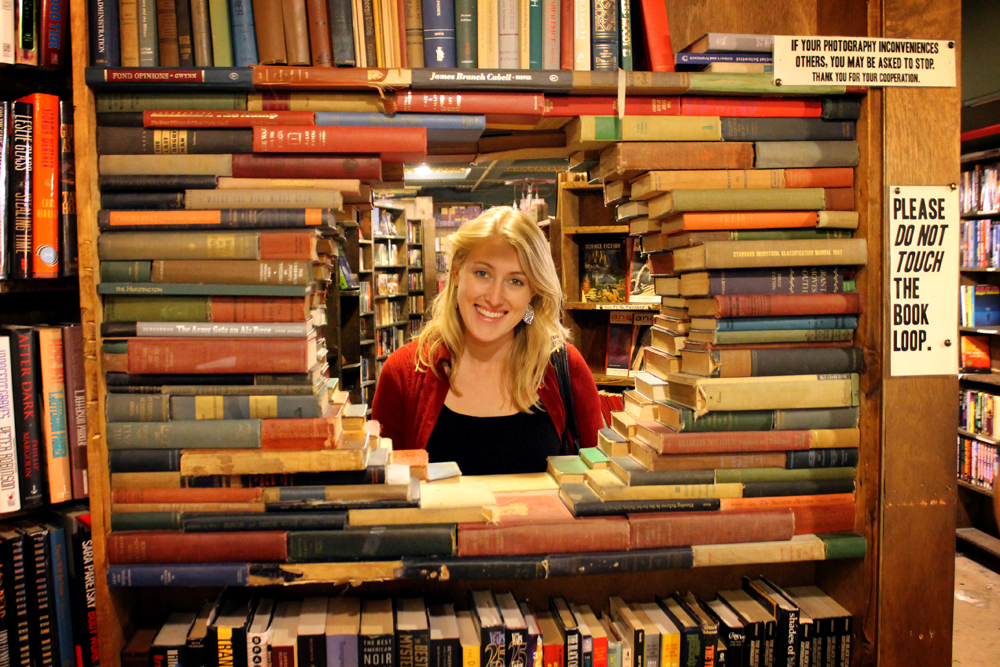 One of Downtown’s most Instagrammable spots: The Last Bookstore

TripAdvisor is always one of my go-to resources whenever I’m planning a trip, so I figured, when playing tourist in my hometown, why not see what the reviewers recommended? In addition to the extensive ratings and reviews of attractions, tours, restaurants, and hotels, TripAdvisor also allows you to book these experiences directly through the website. I came across Avital Tours’ Downtown L.A. Food Tour and knew it would be the perfect way to experience a side of L.A. I’d never known. Fortunately, the booking process was super smooth and easy, and, before I knew it, I was counting down the days until the tour.

Heading west of Downtown? Check out these five stores you need to visit in Beverly Hills!

On the day of, we kicked things off by meeting our guide Penny at Downtown’s famed Grand Central Market. The group size of seven (three of which happened to be celebrating birthdays!) made for a very personalized encounter, and Penny’s enthusiasm for Los Angeles, cuisine, history, and her work shone through immediately. We strolled through the century-old market, marveling at how it’s evolved over the years from a grocery shopping hub into a trendy hipster haven. 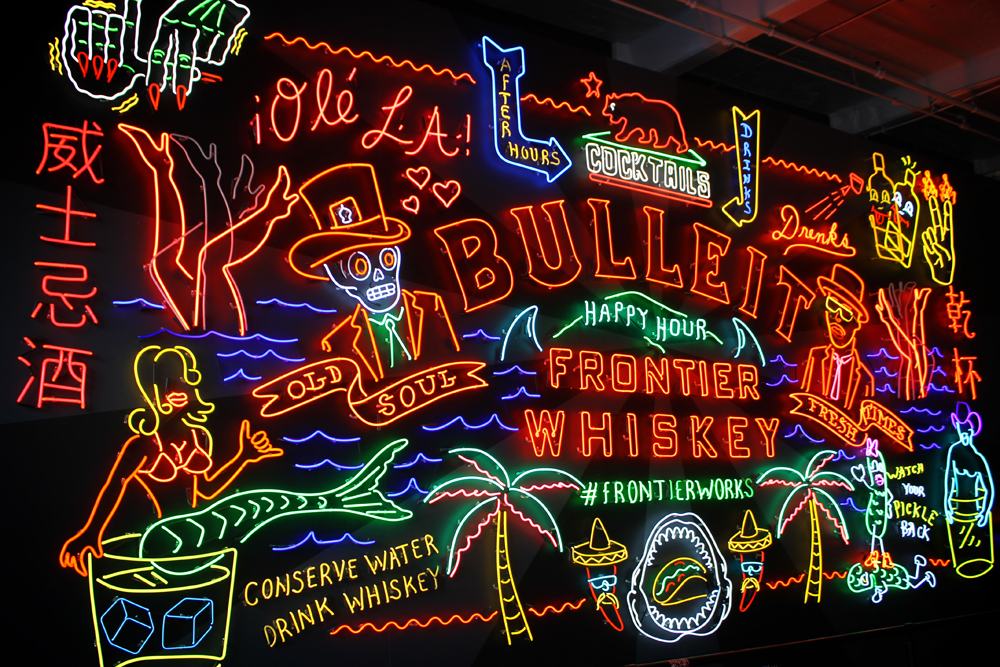 In a city as young as Los Angeles, you wouldn’t expect a ton of awe-inspiring architecture, but Downtown is packed with gems that are gradually being restored. One of these is the Bradbury Building, the city’s oldest landmarked building and our next stop on this L.A. food tour. We checked out the interior, used in films such as Blade Runner, while Penny laid out our itinerary for the day. 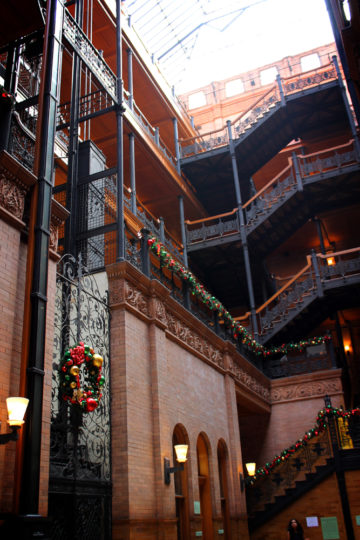 Inside the Bradbury Building

Next up was our first tasting! The modern café P.Y.T. presented us with one of the most beautiful avocado toasts I’ve seen – and, as it turned out, the most delicious I’ve tried. A former resident of Sydney, I’m no stranger to the trend of avocado toast, but this one was a perfect blend of creamy sauce, citrus, arugula, pepitas, and, of course, avocado. Not a bad way to kick off a morning. 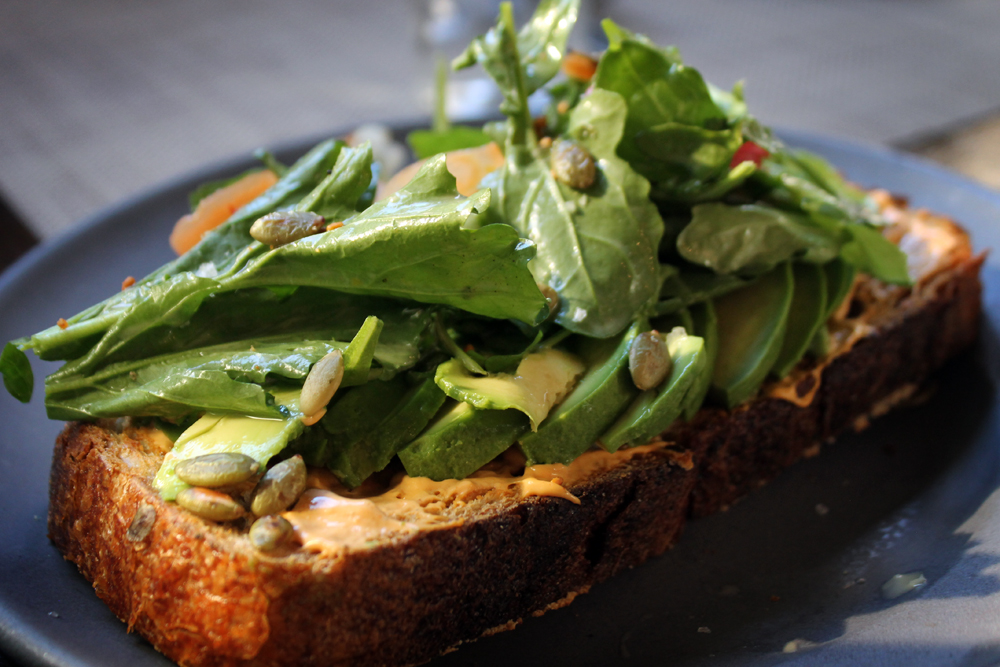 We then strolled through a farmers’ market as Penny told us more stories of L.A.’s past, before wandering through the Spring Arcade and landing at Guisados. Though the restaurant has now become a small chain, it’s a family business through and through, and Penny shared its origin story as we waited to try their menu. We were served two of the restaurant’s best tacos, both featuring perfectly marinated, slow-cooked meats and tortillas that had been handmade just on the other side of the window. 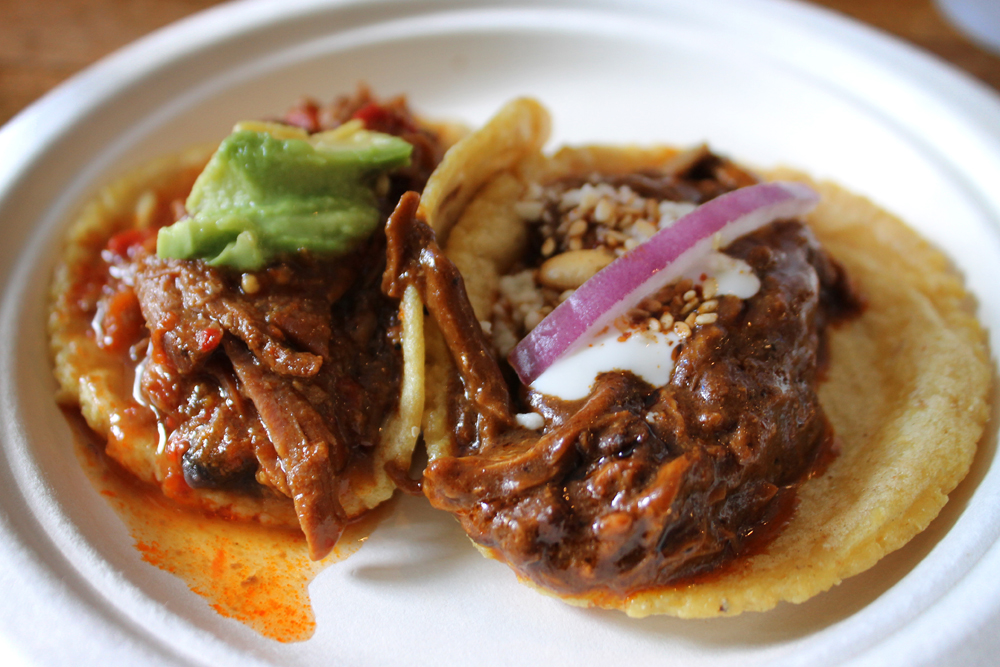 Tacos don’t get much tastier than this

En route to the next dish, we made a detour at an L.A. institution I had somehow never been aware of: Clifton’s. This complex opened in 1935, with a cafeteria, bakery, mountain-lodge style restaurant, and tiki bar occupying its multiple floors – all of which feature elaborate decorations and hidden nooks and crannies, almost like something you’d find at Disneyland. A really neat place that I’ll definitely be revisiting.

The first floor at Clifton’s

Next on our Downtown L.A. food tour, we headed to another classic, Cole’s. As many Angelenos know, there’s a bit of a rivalry between Cole’s and Philippe’s over which Los Angeles restaurant invented the French dip sandwich back in 1908. I’ll admit that I’ve always been Team Philippe’s, but, as I had never eaten at Cole’s, I was eager to give it a try. And its French dip certainly did not disappoint. Plus, we got to check out the speakeasy in the back of the restaurant and hear a bit about Cole’s history. My verdict: don’t choose sides in the Cole’s vs. Philippe’s rivalry, and enjoy both whenever you can! 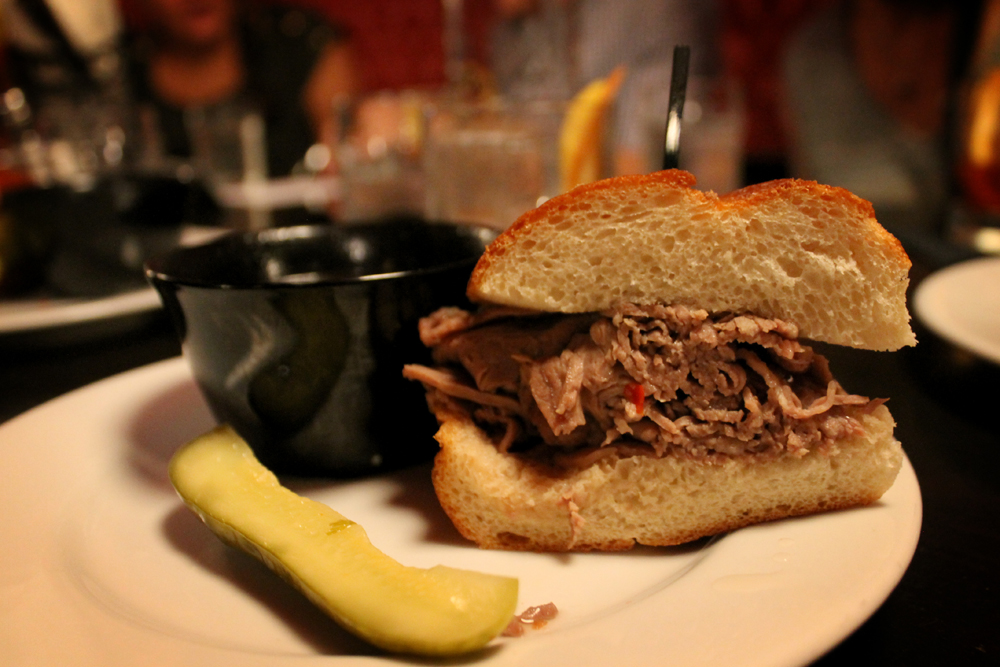 The original French dip? Who knows, but I ain’t turning it down!

It’s not a real food tour without a little dessert, so we finished our walk by heading to quirky Peddler’s Creamery. Here, the organic, fair-trade, and sometimes vegan (how very L.A.) ice cream is churned by bicycle – and if you’re looking to save a few bucks, you can even volunteer to peddle in exchange for a scoop! I was feeling festive, so I tried the pumpkin spice and candy cane flavors, a sweet ending to a scrumptious day. 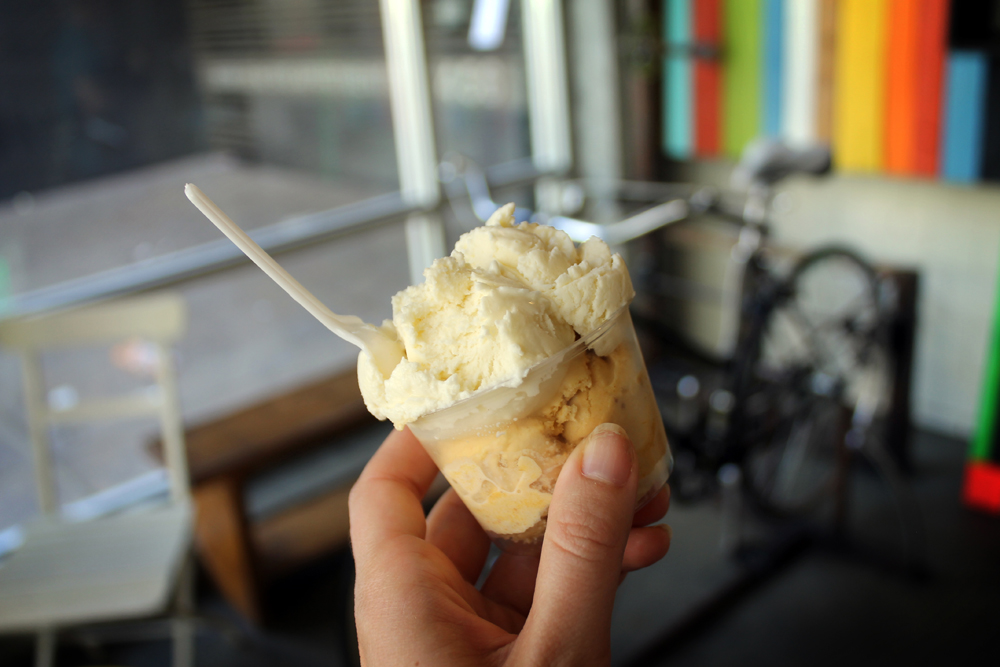 Ice cream and the bike that made it!

Penny’s culinary and historical expertise combined with the complete joy she brings to her role made this one of the most entertaining tours I’ve experienced anywhere. Every dish I tried was mouthwateringly spectacular, and I got to see sights and hear stories that were totally new to me, even after 28 years of being an L.A. native. TripAdvisor made the booking process fantastically easy, and I’m psyched to continue using it to play tourist as I settle back into California life.

The transition from full-time travel to the “real world” hasn’t always been easy, but it’s experiences like this that remind me I’ve made the right choice in returning to sunny Southern California. Here’s to the many hometown adventures that lie ahead!

This post was written in partnership with TripAdvisor, but all opinions are entirely my own, as always.