Best Gig Ever? Volunteering at the Jaguar Rescue Center in Costa Rica

It’s hard to wrap my mind around the fact that five years ago, for an entire month, my daily life consisted of waking up in a tropical paradise, biking along the Caribbean Sea, and then spending my day holding baby monkeys, feeding sloths, and playing follow the leader with a brain damaged anteater. But that’s exactly how I spent my days when I volunteered at the Jaguar Rescue Center in Puerto Viejo, Costa Rica for one incomparable month in 2017. 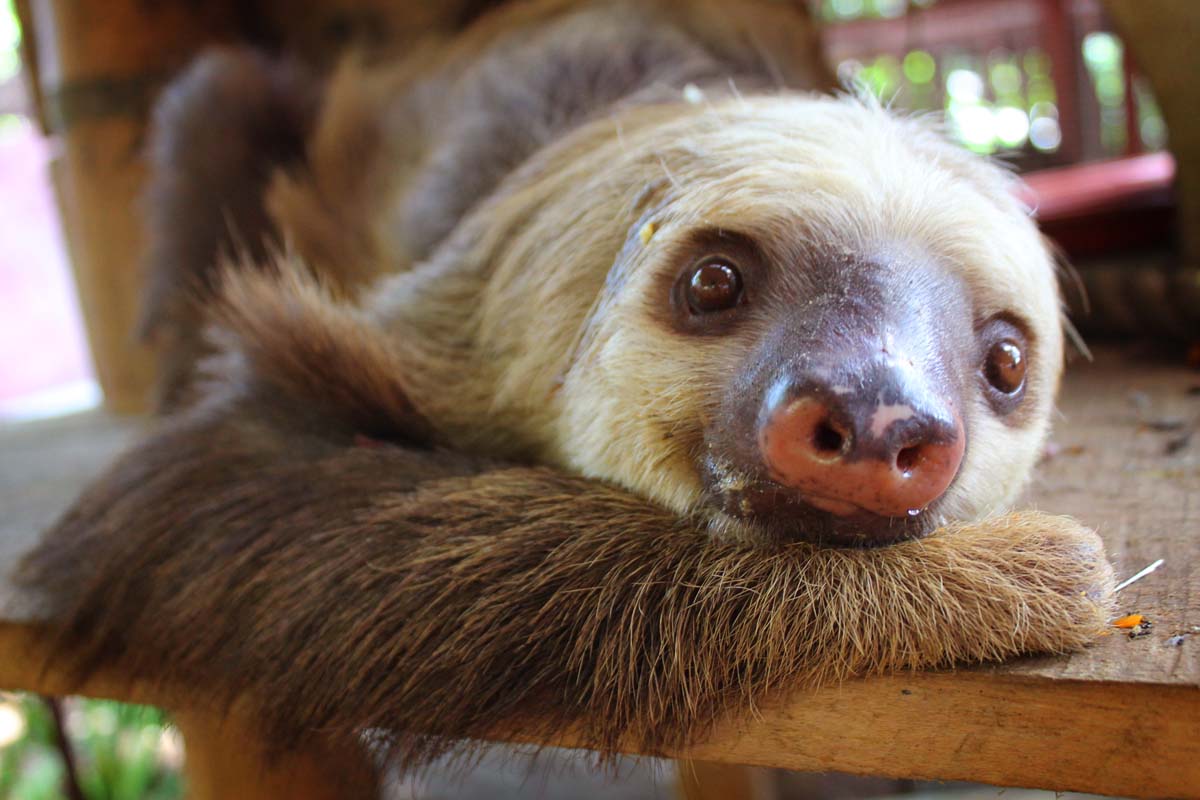 If you missed my first post on the Jaguar Rescue Center, I shared the story of how I stumbled upon the center and made the decision to return to Costa Rica as a volunteer. Check it out for exposition. At last, I’m back to continue telling the story of one of the most unique opportunities I’ve ever had.

Picture it: Puerto Viejo de Talamanca, 2017 (thanks, Sophia Petrillo). Though I’d only spent a few days in Costa Rica the month before, by this point, I was feeling like an old pro in Central America, so getting situated felt quick and easy. A direct flight took me from L.A. to San José, and then I caught an inexpensive Uber from the airport to the bus station in the city center. After purchasing tickets for the next available bus, I had a few hours to kill, so I scrounged up some bus station snacks and found a phone provider shop at the nearby mall to pick up a local SIM card. And then I was on my way back to picturesque Puerto Viejo. 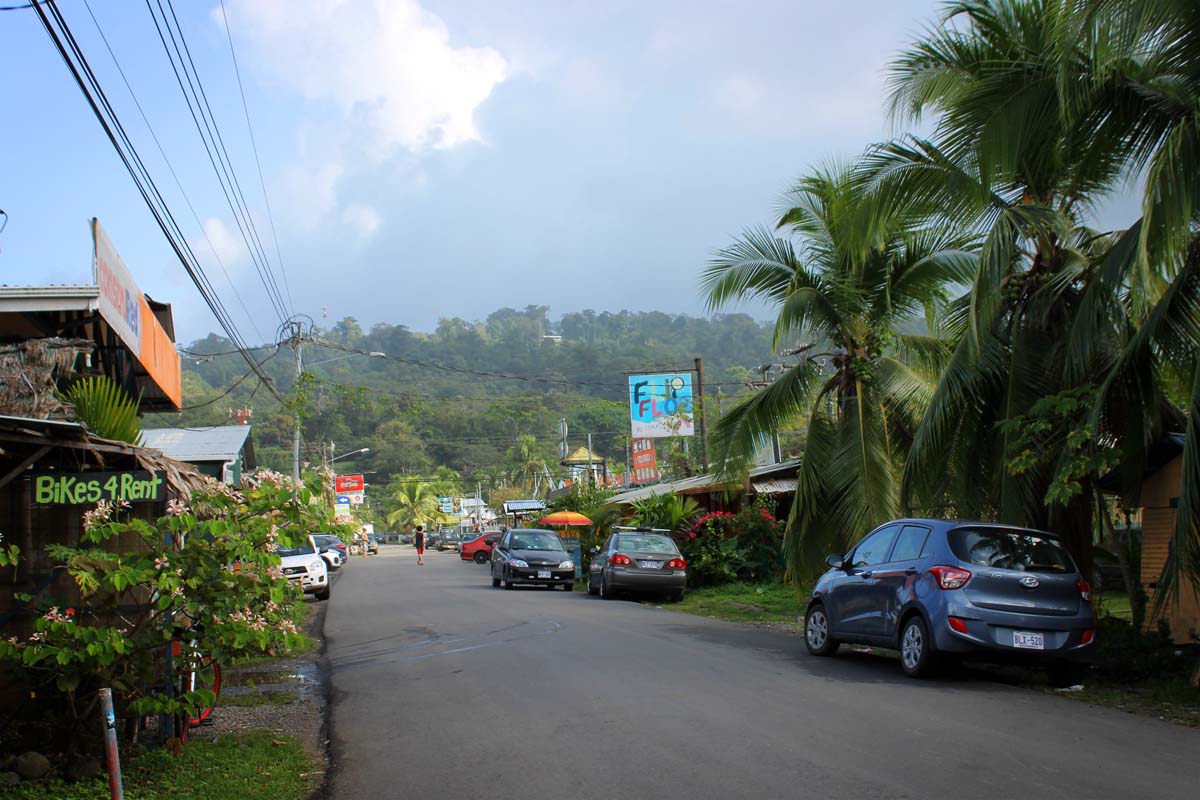 If you’ve stumbled upon this post because you’re considering volunteering at the Jaguar Rescue Center, it’s my understanding that the housing situation has evolved quite a bit since I was there in 2017. During my time there, they were just putting their finishing touches on volunteer accommodations next door. It looks like these accommodations, called the Jaguar Inn, are now where most volunteers stay. But since this wasn’t an option back then, volunteers were left to find their own lodging, and I opted to spend most of the month at Hostel Kinkaju on a quiet street in Puerto Viejo.

Google informs me that the hostel has since been permanently closed, so unfortunately I can’t recommend a stay there. That said, Hostel Kinkaju turned out to be the perfect home base during my time at the Jaguar Rescue Center. Costa Rica tourism is considerably pricier than many of the countries I’ve visited, but for $14 a night, I had a bed in a shared dorm, plus access to a kitchen, common area, and yard that I often had all to myself. It’s a small, quiet hostel where I was able to spend warm evenings lounging on the balcony with a book or laptop, occasionally watching tropical thunderstorms roll in. 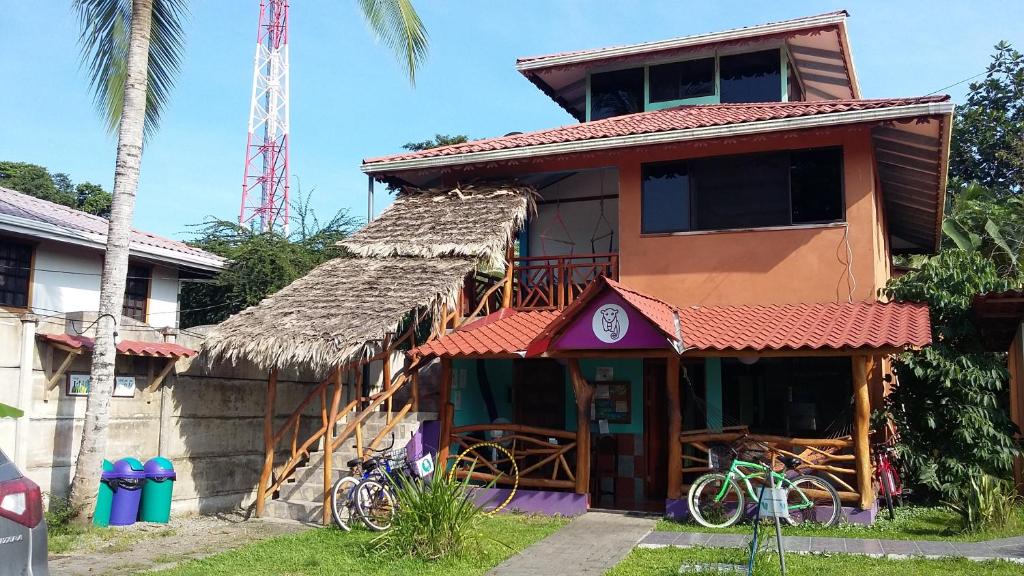 Deep in Puerto Viejo’s DNA is the fact that it’s a total bike town. Puerto Viejo itself is a small town: you can traverse it on foot in less than ten minutes. However, some of the area’s best destinations are a few miles down the coast, including the Jaguar Rescue Center. The JRC is located in the nearby town of Punta Cocles, which lies a little less than three miles from Hostel Kinkaju. Needing a quick and easy way to get to the center each day, I roamed around town getting quotes for month-long bike rentals until I found a good deal.

Trusty, rusty set of wheels acquired, I was ready to begin my stint as a volunteer at the Jaguar Rescue Center. So I woke up the next morning, smothered myself in sunscreen and mosquito repellant, and pedaled my way to the JRC. 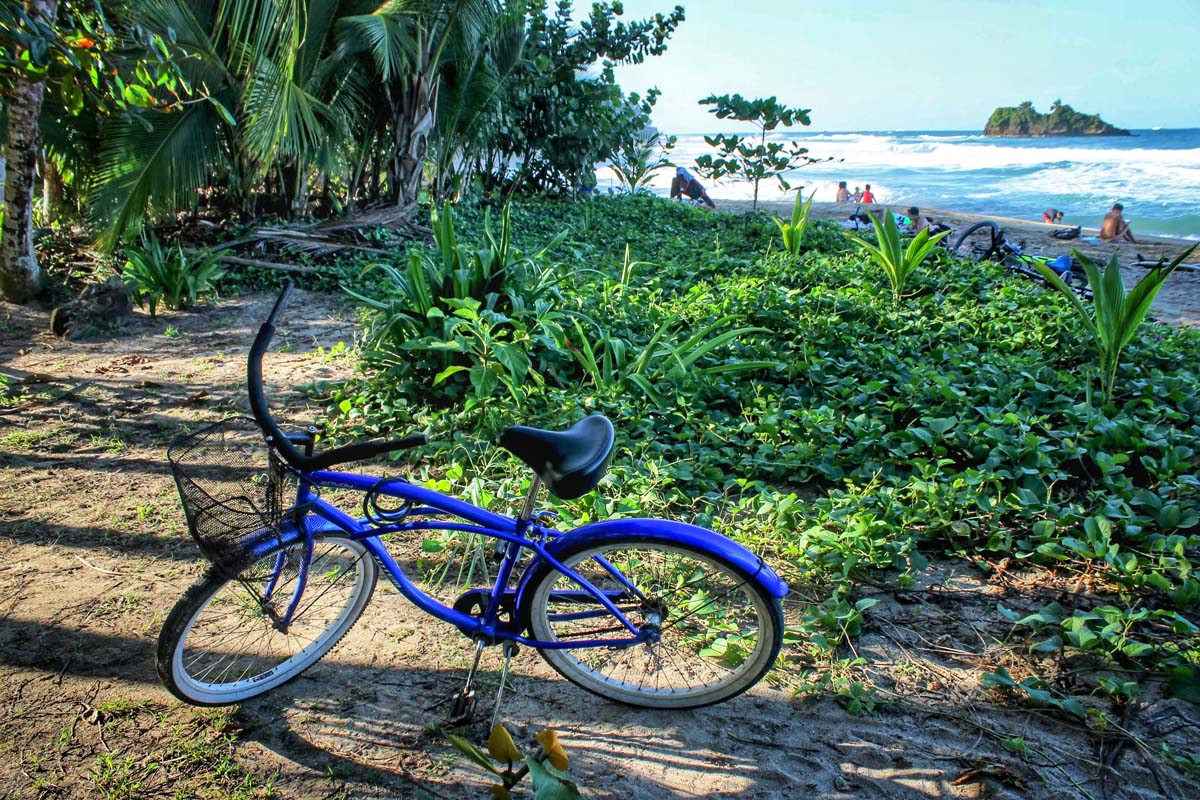 Boy, let me tell you: riding a bike along a quiet road—with lush green rainforest to one side and the sparkling Caribbean Sea to the other, a cool morning breeze on my face, the audiobook of The Right Stuff or the podcast Serial piped through my earphones (that sure dates these memories), and nothing but sloths, raccoons, and baby monkeys ahead—was far and away the best commute I’ll ever have in my lifetime.

The Jaguar Rescue Center typically has new volunteers start each week, and those volunteers tend to spend three weeks at the center followed by a week at La Ceiba, JRC’s release center. They’d asked me to arrive after the morning shift on my first day so I could jump right into orientation. It began with a tour of the center (which I’d done as a visitor, but it was even more exciting as a new volunteer!), then they explained the structure of each day and the various tasks we could be assigned to. 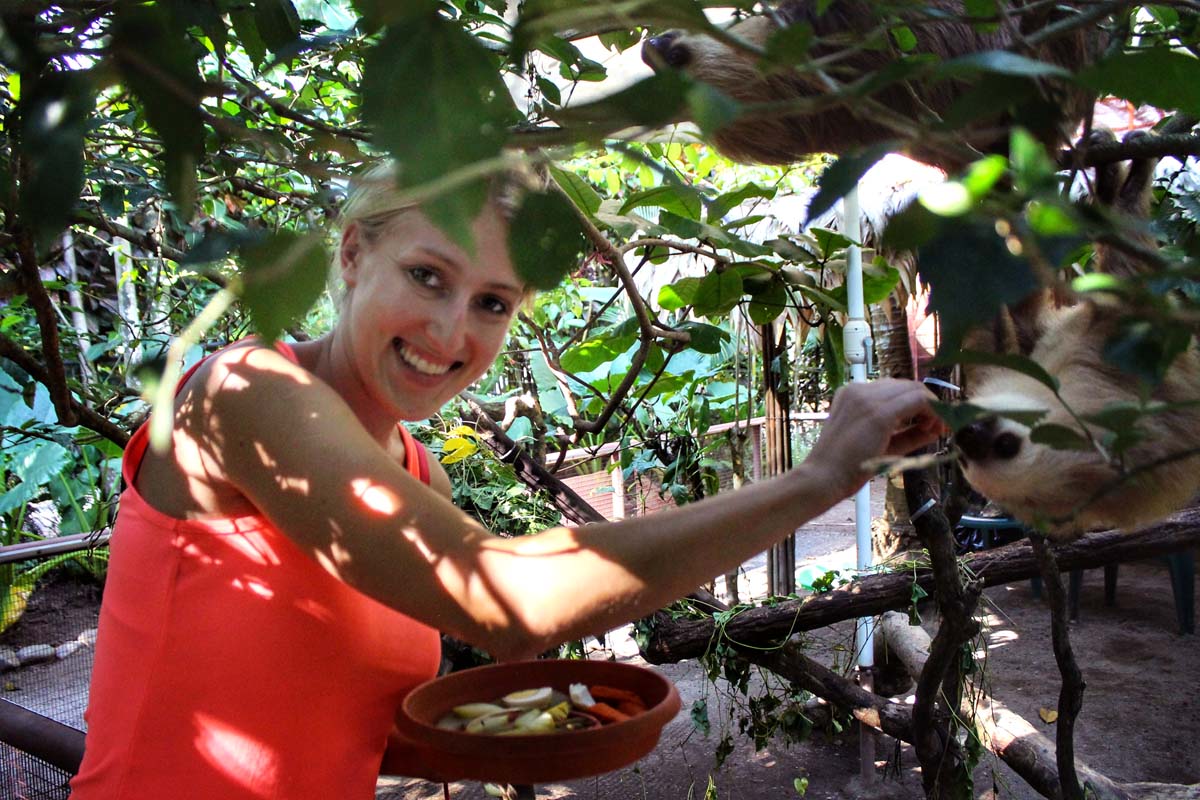 The basic set up was this: volunteers worked five days a week (with two days off of our choosing), arriving at 7:30am and kicking off the day with a group meeting. During that meeting, they gave us important updates like new arrivals to the center, progress reports on animals in recovery, and things to keep in mind when working with the animals. Then, the volunteer coordinator would assign each of us to a task for the morning shift.

Morning tasks were completed before the center opened to visitors, so they usually focused less on caring for the animals themselves and more on prep work like cleaning enclosures, sorting laundry, raking paths, or preparing animals’ meals. More often than not, to put it bluntly, I encountered quite a bit of fecal matter during this shift. You’d be surprised by how quickly you learn to tolerate monkey poop after a few days. 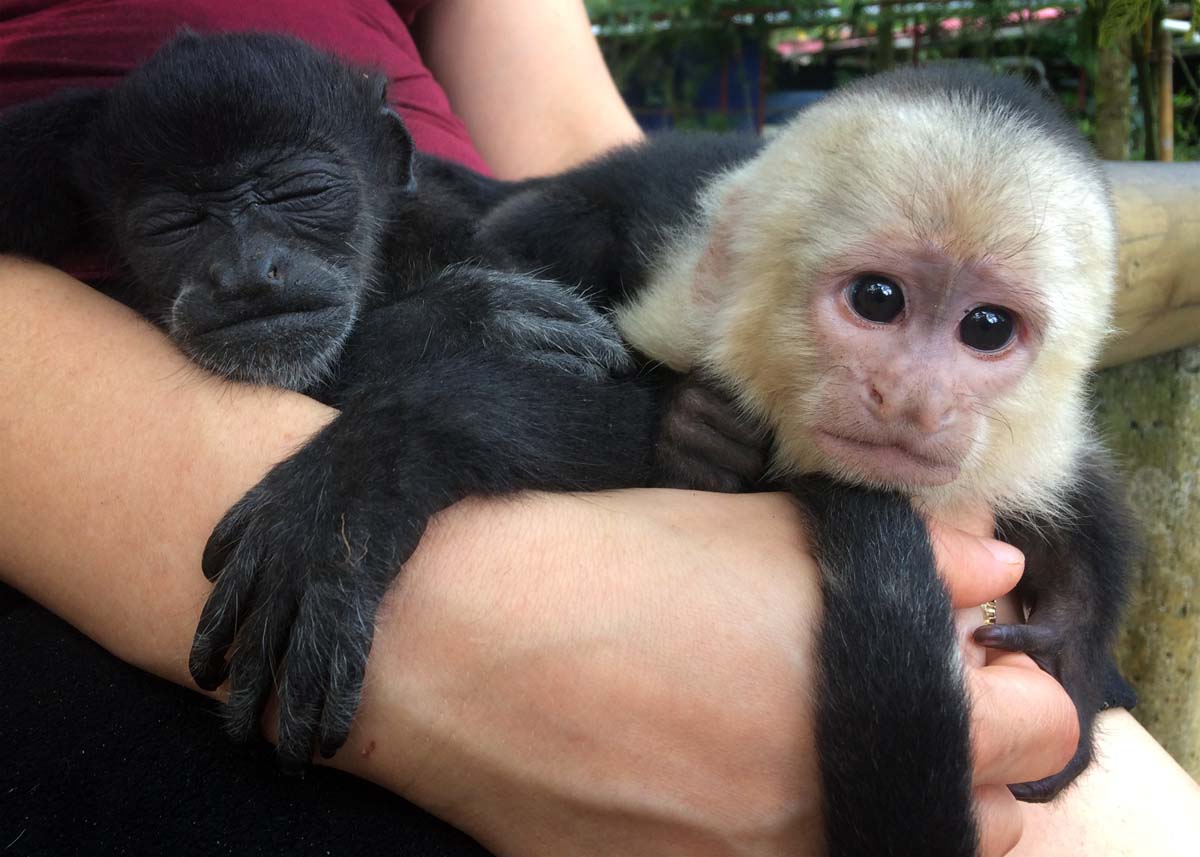 And anyway, these faces made it worth it. (Patchy and Rolo in the arms of another volunteer.)

The center opened for public tours at 9:30am, at which time volunteers were assigned to a new shift. From there, we’d have a lunch break, then it was back for the final shift of the day before the center closed to the public.

Sometimes, those shifts included behind-the-scenes cleaning projects or kitchen work. I actually grew to love dishwasher duty because it was a pleasant break from the heat and noise. Several times, I was assigned to bike around town picking hibiscus flowers to deliver to the resident sloths, for whom hibiscus is like candy. My favorite non-animal assignment, though, was working at the center’s café, preparing smoothies and coffees for giddy tourists while keeping my Spanish up by chatting with Costa Rican staff.

One of the center’s frequent visitors

But, of course, the best shifts—and the reason we volunteers were all there—were those spent face-to-face with the animals, usually either feeding them or keeping an eye on them as they were given room to roam outside their enclosures. Some of these animals were at the center because they were recovering from an injury, while others were being raised there after being orphaned.

While some of the more challenging residents, like the snakes, crocodiles, and wildcats, were attended to by long-term volunteers and staff, volunteers like me had the chance to interact with a wide variety of creatures. Throughout my time at the Jaguar Rescue Center, I spent time with birds, baby monkeys, sloths, kinkajus, horses, an anteater, a boar, a pelican, and deer.

One of my first assignments was to spend a shift with a pair of wounded birds. I was assigned to pick them up from their enclosure, carry them over to an unenclosed perch, and watch them trot around while occasionally feeding them worms. I guess they were too wounded to fly the coop even if they’d wanted to, but whenever they jumped off their perch, it was my job to hold out a stick they could hop on, and I’d return them to their perch. Those few hours were surprisingly relaxing and fulfilling, and though birds weren’t one of the center’s most popular animals, I always found myself eager to pay visits to my new avian friends.

As you may know from my last post, the prospect of working with sloths was the main reason I decided to spend a month at the Jaguar Rescue Center. And those sloths certainly did not disappoint. Over those weeks, I found myself bonding with many of the center’s residents as well, monkeys and an anteater (and later a troop of raccoons at the release center) being my favorite. But I could—and in fact I already have—write hundreds of more words about those experiences, so let me save that for a part three.

Stick around, because I’ll be back with more of my nostalgic ramblings about my time at the Jaguar Rescue center, including sloths, baby monkeys, hikes with raccoons, and life outside of volunteering!