My First Visit to Costa Rica’s Jaguar Rescue Center: The Tour That Started It All

I vowed in a recent post to start writing the posts that I want to write instead of the posts I feel I should write. So where better to start than one of the coolest experiences I’ve had in all my adventures: volunteering at the Jaguar Rescue Center in Puerto Viejo, Costa Rica? More than three years have passed since my stint there, but since I only wrote about it briefly, let’s take a trip down memory lane, starting with the story of how I found myself at the Jaguar Rescue Center to begin with.

Hanging with Capuchin monkey Rolo as a volunteer

The six weeks I spent making my way down Central America in early 2017 were some of the best of my life. There’s just so much to adore about the region, from friendly people (both locals and fellow backpackers!) to good food to incredible landscapes like rainforests and active volcanoes. I began the trip in Belize, traveled overland through Guatemala, then hopped on a plane to Managua from which I traveled through Nicaragua, Costa Rica, and Panama.

I had scheduled just six days in Costa Rica, and, based on recommendations from travelers I’d met earlier in the trip, I planned to split my time between the cloud forest town of Monteverde and the Caribbean hippie hangout of Puerto Viejo de Talamanca.

Monteverde, in Costa Rica’s northwest, was a true stunner, with its lush green cloud forest, varied wildlife, and ziplining opportunities. After my few days there, I transferred buses in San José and then headed southeast to the Caribbean coast, close to Costa Rica’s border with Panama. I’d heard nothing but good things about Puerto Viejo, and I immediately saw its charm. “Hippie vibes” are the best way I can describe it. Laid-back tourists wander through the colorful town by bicycle, relaxing at outdoor restaurants and enjoying Puerto Viejo’s long stretch of tropical beaches. 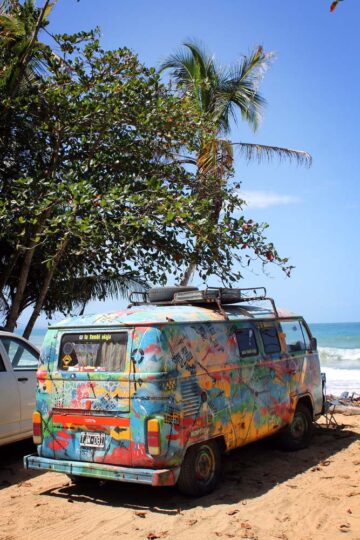 Since I was about a year into my global backpacking adventure at this point, I’d gotten pretty laissez-faire about planning activities for each destination, and I knew little about Puerto Viejo’s attractions before arriving. So when someone at my hostel invited me to join her the next day to tour something called the Jaguar Rescue Center, I immediately agreed to it. “I think you can hold and play with actual jaguars there!” she told me, which I’ll just tell you right now is definitely inaccurate—and seems even more ridiculous after we all endured The Great Tiger King Mania of 2020.

So what is the Jaguar Rescue Center, in reality? It’s an animal sanctuary that cares for and rehabilitates injured or abandoned animals. Costa Rica is one of the most biodiverse countries in the world, but many of its wildlife wind up injured by human activity, especially vehicles and power lines. The Jaguar Rescue Center takes in these injured animals and gives them veterinary care and a safe place to stay until they’re ready to be released into the wild. It was founded by two biologists from Spain who began being approached by so many people who had found injured animals in the area that they decided to build a sanctuary. Though the Jaguar Rescue Center didn’t house any jaguars when I visited, it was given the name because a jaguar was the first animal the founders rehabilitated. 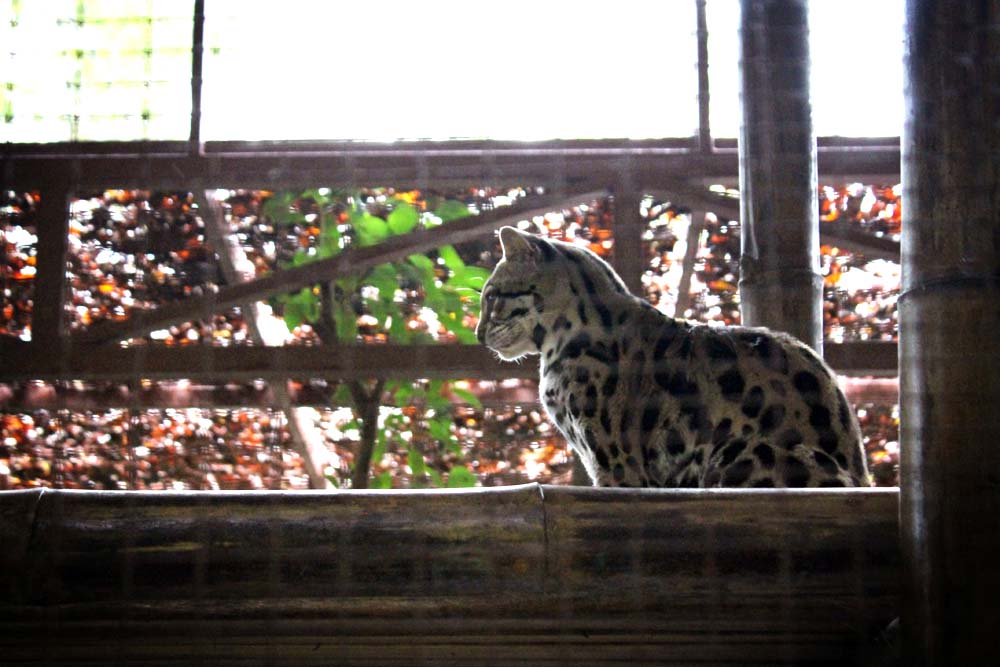 No jaguars, but you will find other wildcats! Don’t quote me on this, but I think this is an ocelot

The center offers public tours, which allow visitors to get up close and personal with the animals while learning about JRC’s mission, Costa Rica, and the lives of these animals. Since the animals’ safety is the highest priority, tourists are not, in fact, allowed to hold or touch any of them. But you can get remarkably close, closer than I’d been to wildlife anywhere in Central or South America. The sanctuary houses a true menagerie, including monkeys, sloths, raccoons, birds, snakes, wildcats, anteaters, deer, squirrels, and crocodiles.

As I’ll get into later, I fell madly in love with quite a few of these creatures, but let’s take a step back and talk about sloths. I. Love. Sloths. Since returning to the U.S., I’ve come to learn that sloths have somehow become, well, hip and trendy. You’ll find them on phone cases, mugs, water bottles, jewelry… you name it. To any of my friends and family reading this, I am immensely grateful for all the sloth gifts you’ve given me, but I am now up to my ears in sloth memorabilia. And so, with all apologies to sloths, I have to admit that their trendiness makes me a little ashamed to be such a sloth devotee. But I came about it earnestly, I swear! 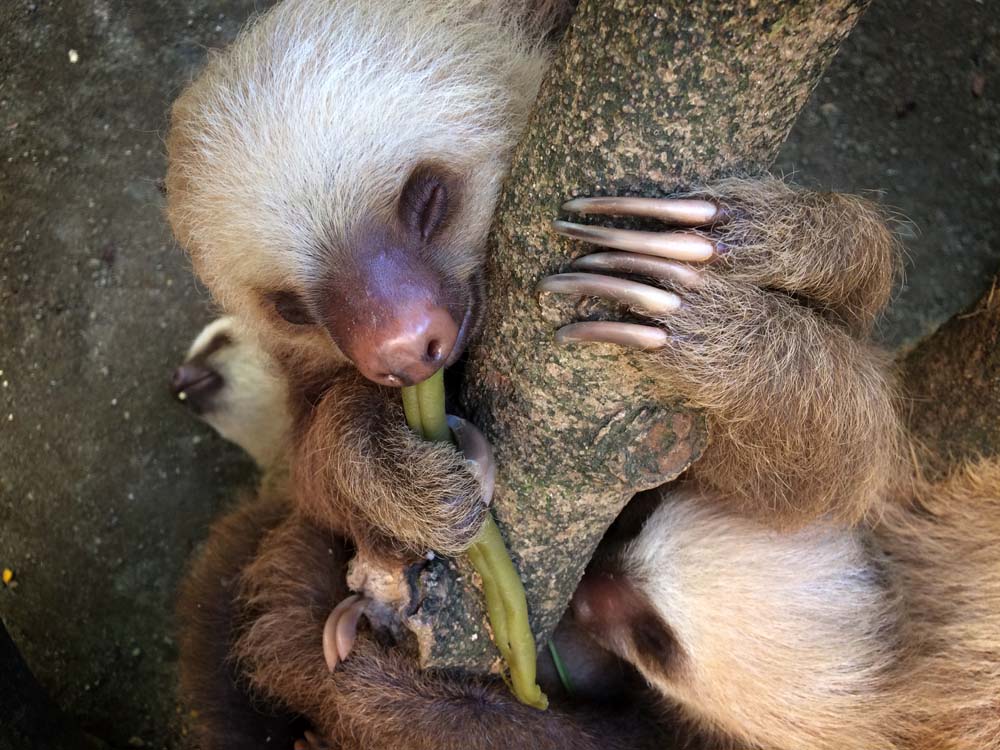 I mean, just look at those lazy dorks!

The previous October, I spent several days in the Cuyabeno Wildlife Reserve, in Ecuador’s part of the Amazon Rainforest. A 12-hour bus ride from Quito was followed by a van journey, then several more hours by canoe. At last, we reached our destination, a bare-bones jungle lodge on the Cuyabeno River, where we spotted wildlife by canoe by day and slept in huts by night.

I suppose I should devote an entire post to that experience, but I bring it up to say this is the first place I saw sloths in the wild, and I was immediately hooked. They’re just so absurd! So slow, bizarre-looking, and mysterious! Sloths became a running joke for my lodge group, and ever since then, I was thrilled every time I spotted a wild sloth in South or Central America. I thought I’d been spoiled in Monteverde, when I saw a sloth from about twenty feet away on a night hike, but I had little idea what I was in for at the Jaguar Rescue Center.

With just over one week remaining in my Central America trip, I had yet to decide my next move. I was returning to L.A. for a family event, but, after that, the future was wide open. I was eager to jump back into my career, but my meticulous penny-pinching combined with freelance earnings while traveling meant that I had some flexibility on timing. I also was hoping to extend my travels long enough to join a reunion of friends I’d met in South America two months later in Vienna, but I was looking for something to fill the time until then. Believe me, I recognize how fortunate I am to have had that choice to make. 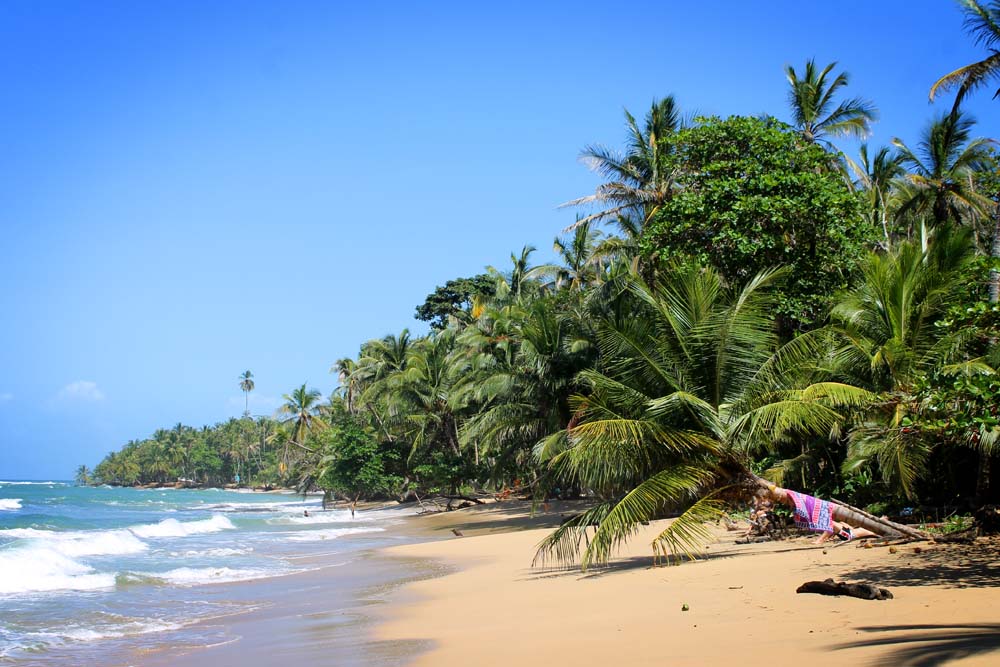 The beaches of Puerto Viejo. Not the worst spot from which to consider my next move

After the bitter disappointment of the previous November’s election, I considered doing some short-term political volunteering, but unfortunately, I had zero idea how to even begin getting involved with that. (I’ve learned a lot since!) But I guess I had embraced the true backpacker spirit, because I kept telling myself I’d play it by ear and figure things out one step at a time.

My tour of the Jaguar Rescue Center was led by an expat volunteer who explained that the sanctuary was primarily staffed by volunteers, who were mostly travelers making extended stays in Puerto Viejo. And just a few minutes into the tour, the heavens opened up, the angels sang, and I saw the most beautiful sight of my life: a basket of baby sloths. And, welp, folks, that was it. That was the moment I decided I had to come back to be a volunteer, if only to gaze lovingly at a basket of baby sloths every day. 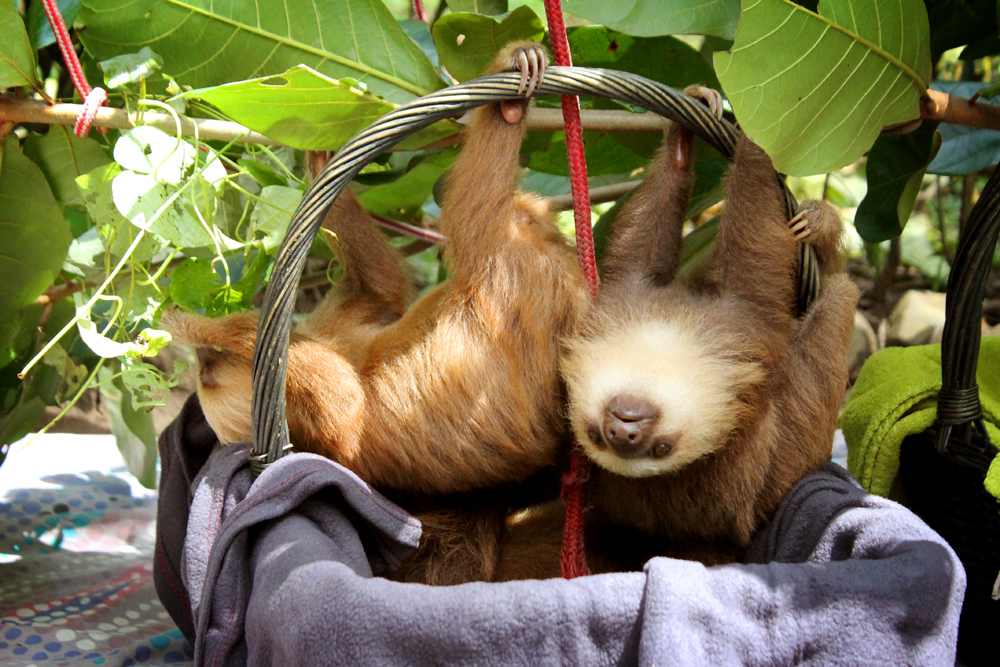 Even after I pried myself away from the basket of baby sloths, the rest of the tour was pure delight. Grown sloths, baby monkeys, exotic birds, adorable wildcats, and more made me fall deeper and deeper in love with the center every minute of the tour. And so, one month later, I was on a flight from Los Angeles to San José, Costa Rica, ready to begin a month of feeding sloths, playing with baby monkeys, and hiking with raccoons.

I said I’d make an effort to write simply for the joy of writing, and here I am 1300 words later with so much more to say. Stay tuned for part two, in which I’ll dive into the dreamlike month I spent living in Puerto Viejo, Costa Rica and volunteering at the Jaguar Rescue Center.