Kudos to the Caucasus: Why I Fell In Love with Georgia, Armenia & Azerbaijan

Two years ago, a return to the real world lay on the horizon, and I knew I couldn’t finish my round-the-world backpacking adventure without one last hurrah. And where better to do that than the continent primarily responsible for my wanderlust, Europe?

Although I’d spent a few months hopping around Europe the previous summer (with stops in France, Spain, Andorra, Latvia, Lithuania, Estonia, Norway, The Netherlands, Scotland, Ireland, and Northern Ireland), I wasn’t quite done with the old continent. Plus, I’d racked up a cornucopia of amazing Europe-based friends throughout my years as an expat and backpacker, so I couldn’t pass up the opportunity to visit them while enjoying some of the most spectacular countries in the world. 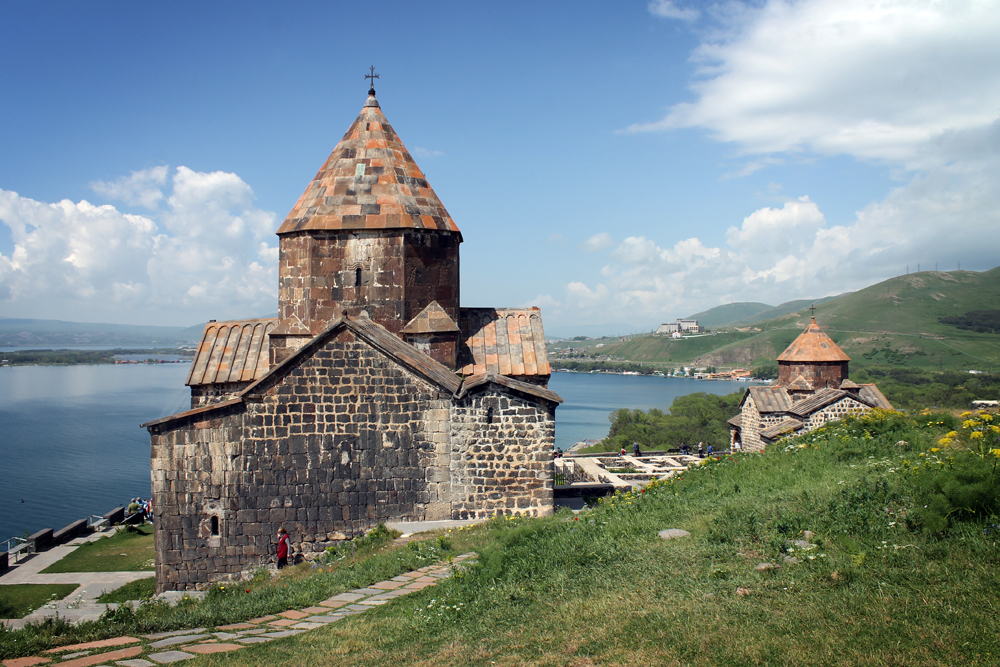 This seven-week stint in Europe ended up being more than I could have ever dreamed of: wrapping up eighteen months of backpacking, I was ready to take it easy and slowly savor each destination. I’d spent most of the preceding year and a half trying to see as much as humanly possible in every spot I saw, which was magnificent but exhausting, so Europe was my chance for a bit of hedonism before jumping back into Corporate America. And so I spent most of my days doing little more than eating, drinking, and hanging out with old friends across France, Austria, Slovakia, Serbia, Kosovo, Bulgaria, England, Wales, and Spain. Idyllic beyond belief. 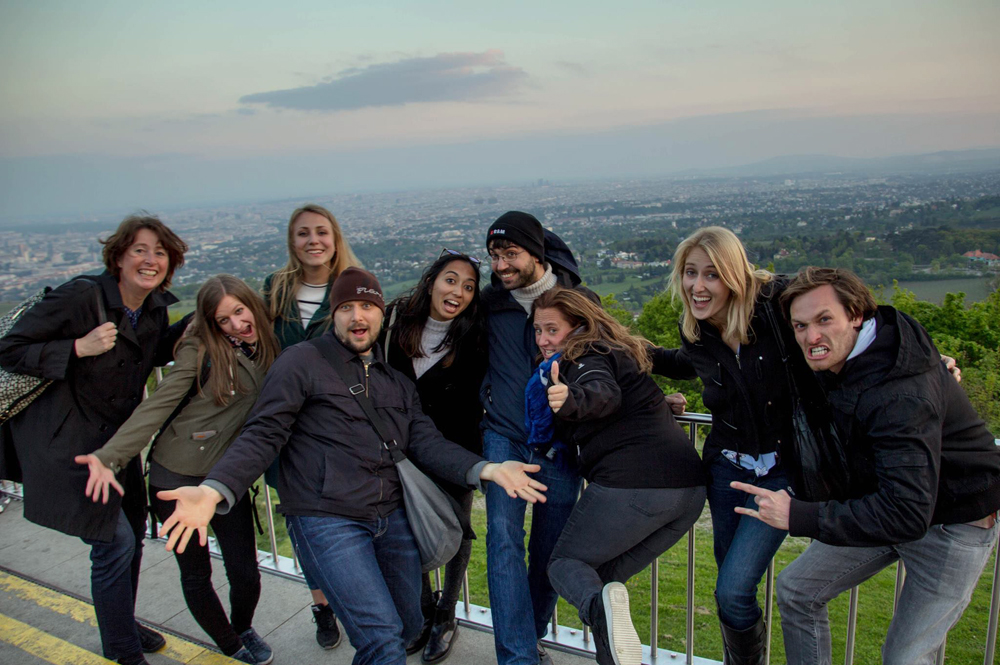 Reuniting with friends I met in South America in Vienna, Austria (photo courtesy of my friend Ellen)

That said, I still craved an exotic adventure, and so I planned a grand finale in a region I’d always dreamed of but had never touched: the Caucasus. “Why there?” many asked me in the weeks leading up to my visit. “Because I’ve never been!” That was reason enough for me, but, as it turned out, Georgia, Armenia, and Azerbaijan were so much more than simply countries to check off the bucket list.

Heading into my trip, I had no idea where to start. Even just two years ago, online information about these countries was limited, and I knew I wanted to see as much of each as I could. I stumbled across a travel blog that mentioned Envoy Tours, and as I began exploring the hostel and tour company’s website and itineraries, I knew I’d found the answer. 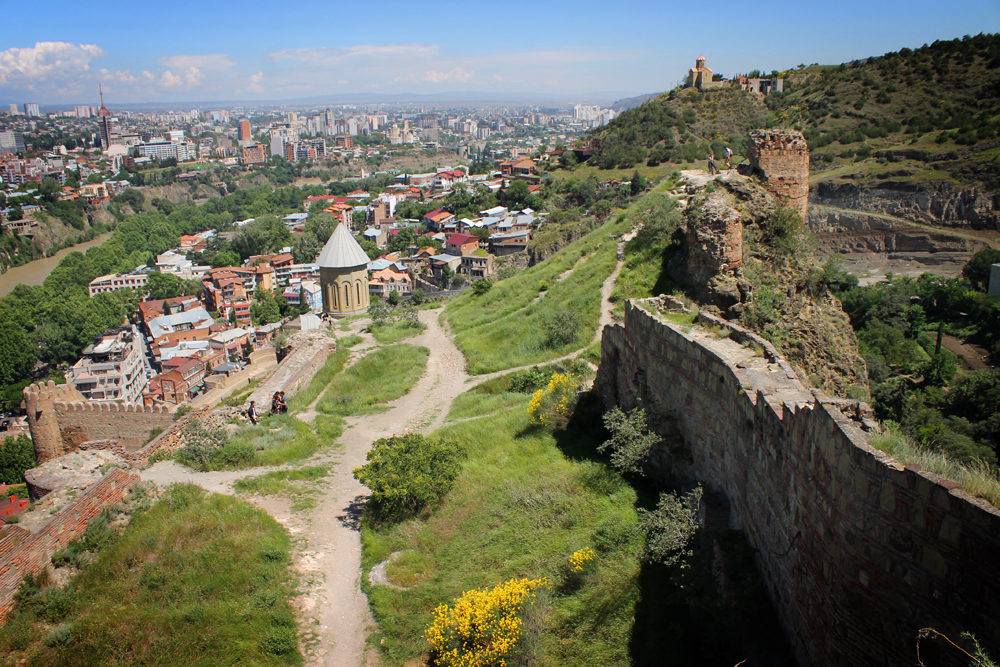 Choosing Tbilisi as my first stop was easy. But where to go from there?

With hostels in Tbilisi, Georgia and Yerevan, Armenia and dozens of tours across both countries (and Cambodia as well!), I was sold. And so my itinerary for the Caucasus took shape, revolving primarily around the five day tours I’d chosen: Embracing Georgia, Enlightened Georgia, Enlightened Armenia, Essential Armenia, and Enlinking Caucasus. And in those five days, I was able to see more than I ever thought doable, learn from passionate, knowledgeable guides, and gain unique insights into Georgian and Armenian culture.

After exploring Georgia and Armenia, I traveled to Azerbaijan by overnight train (quite the adventure in itself), where I spent several days relaxing and wandering around its capital Baku. In total, I spent just two weeks in the Caucasus, but those two weeks account for many of my favorite travel memories of all time. Here are a few reasons I adored the region with all my heart.

Oof, that food! The clear winner for cuisine was Georgia, if only for its two most famous dishes, khinkali and khachapuri. Khinkali are Georgian soup dumplings, typically filled with spiced meat, although you’ll also find variations with cheese, potatoes, or mushrooms. And khachapuri—ohh khachapuri, how I still dream of you. The term can refer to any bread and cheese dish, sometimes akin to a flatbread, although where it’s really at is the Adjarian khachapuri, boat shaped dough filled with hot cheese, butter, and raw egg. Imagine the world’s most delicious queso dip, and it’s far better than that. 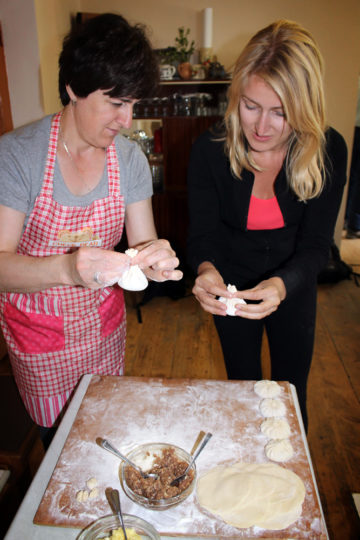 I ate each of these just about every day I spent in Georgia, pairing it with other dishes that never disappointed. Enjoying them at charming outdoor cafes or in archaic cellars made the meals even more memorable. And the best part? It’s all SO DAMN inexpensive. I was living like a queen on $5 a meal.

Exploring Georgia and Armenia with Envoy Tours, I even had the chance to enjoy several meals in locals’ homes, tasting homemade meats, cheeses, breads, and wines I may have never tried as a typical tourist. 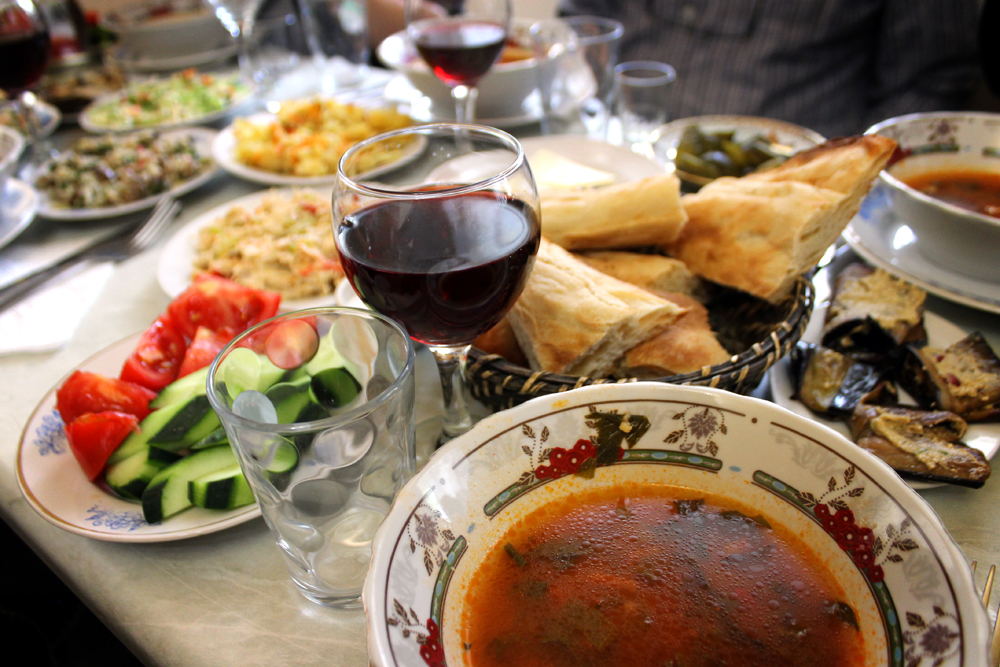 A home-cooked meal at the same Georgian home

And to top it all off, wine! Delicious, local, cheap wine! The Caucasus is one of the oldest wine producing regions in the world, and its wine is like nothing you’d taste elsewhere in the world. Some of it can take some getting used to, but it grows on you fast. Even Azerbaijan, which is predominantly Muslim, offered great drinks. I spent one of my best nights in Baku pounding 50-cent pints of beer in what appeared to be a centuries-old wine cellar. 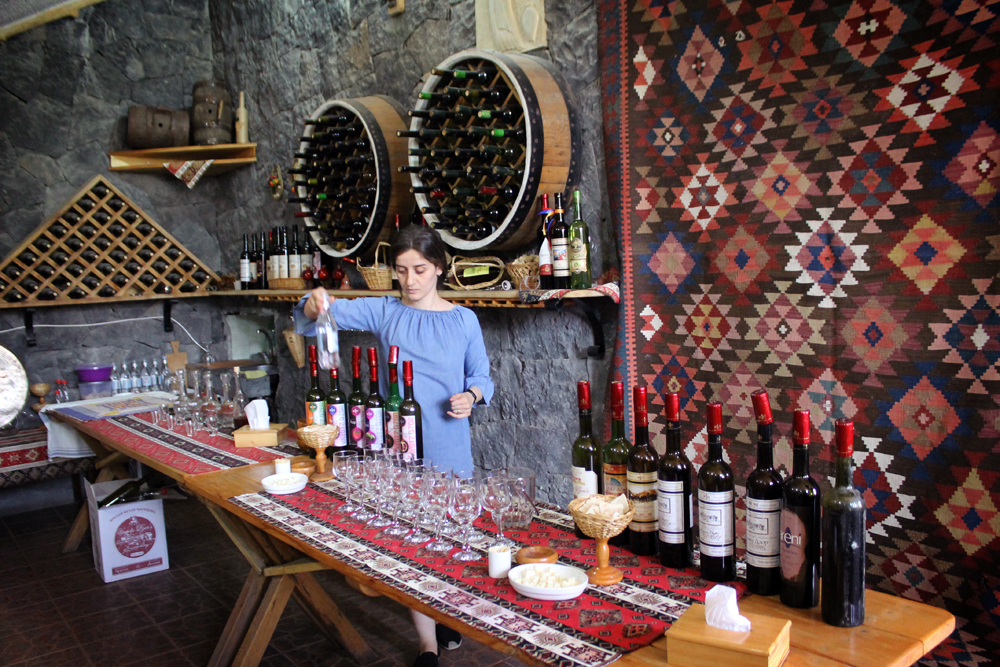 Okay, enough rambling about food and alcohol. Georgia, Armenia, and Azerbaijan also have some of the most fascinating histories anywhere in the world, and it’s evident in their awe-inspiring architecture and hodgepodge of cultures.

In the Caucasus, you can explore churches that date back to the 4th century AD and taste wine just minutes away from where wine was made 6100 years ago, then fast-forward to the 21st century and see the impact of communist on these former Soviet states. I learned about just how much the area has changed in the years since the fall of the Soviet Union: compare stories of minimum access to electricity in the 1990s to the towering, ultra-modern skyscrapers of Baku’s Flame Towers. 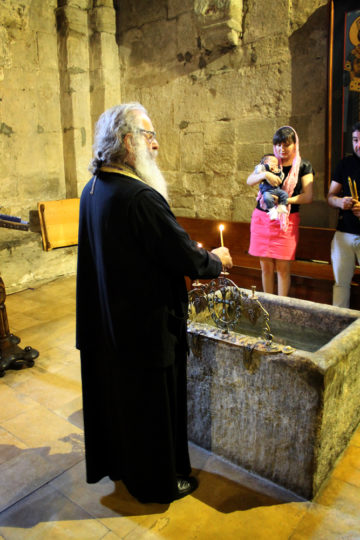 Envoy Tours did an incredible job of walking us through the history, showing us how Christianity flourished and diverged in Georgia and Armenia over the past two millennia (in contrast to their 97% Muslim neighbor Azerbaijan) and explaining the convergence of cultures in the region. In Gori, Georgia, we visited Stalin’s birthplace and a Stalin-worshipping museum that’s been frozen in time, the same town that was bombed by Russia as recently as 2008.

We learned about the Nagorno-Karabakh region, which is tensely disputed between Armenia and Azerbaijan. Accordingly, the Azerbaijani border patrol agents made their hostility clear when they noted the Armenian stamp in my passport. And then I arrived in Baku, a mix of ancient Islamic architecture, stark Soviet structures, and opulent skyscrapers. 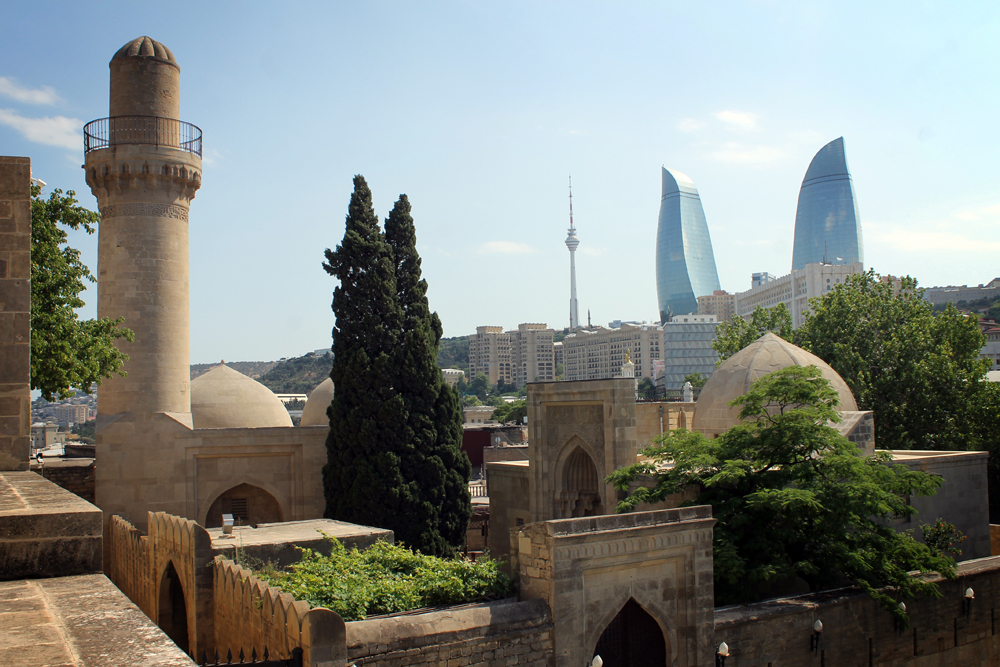 I’m no historian, so I won’t begin to explain the story of the region. Let me just say: you won’t regret heading there and discovering the history for yourself.

Before arriving in the Caucuses, I really didn’t know what scenery to expect. I was mostly eager to explore the three capitals, but, as it turns out, what really captured my heart (and filled up my camera’s memory card) were the natural landscapes in more rural parts of the region. Although the three countries only cover an area about 2% of the size of the U.S., they’re incredibly geographically diverse. Thanks to Wikipedia (and apologies to my college geography professor) for explaining: “The region contains biomes ranging from subtropical lowland marshes and forests to glaciers (Western and Central Caucasus), and highland semideserts, steppes, and alpine meadows in the south.” 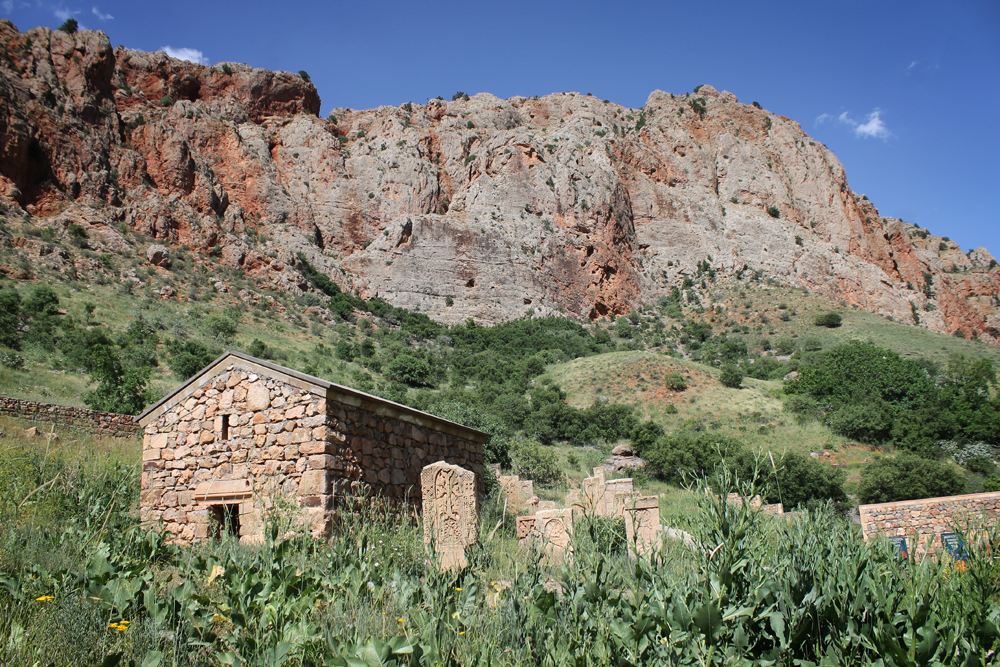 From the verdant, colossal mountains surrounding Georgia’s Jvari Pass to the dry, flat desert outside Baku contrasted by the endless Caspian Sea, nearly every bit of the Caucasus had me in awe. And the striking landscapes made the ancient temples, cathedrals, and monuments all the more memorable. Try to enjoy the scenery with your own eyes, but I won’t blame you if you wind up taking a couple million photos while traveling the region. 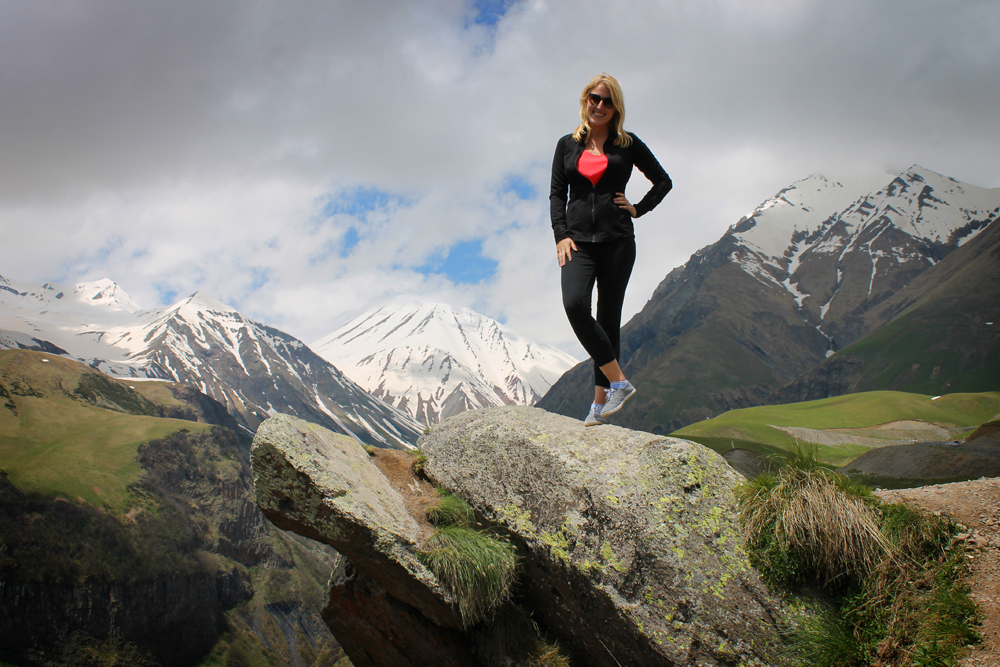 I try to avoid generalizing about a population, but I’ll say it anyway: the people of Georgia, Armenia, and Azerbaijan are remarkably warm and welcoming, which makes traveling through the region all the more enjoyable. Envoy’s local guides were incredibly cool and helpful throughout, and, as I mentioned earlier, these tours also introduced me to local families who hosted us for delicious meals. As much as I love learning other languages, I haven’t yet conquered Georgian, Armenian, or Azerbaijani (one day?), but English was widely spoken, and even those who had limited English were happy to meet halfway. 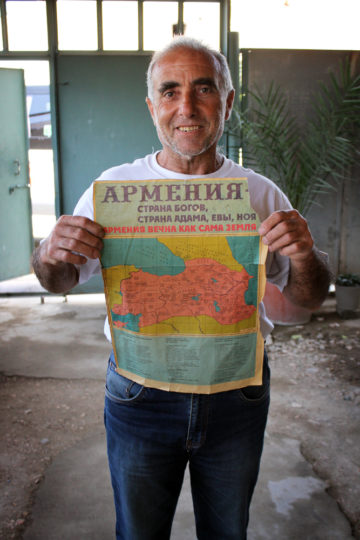 If there’s one thing I learned about Georgian culture again and again, it’s just how magnificently hospitable Georgians tend to be. Hospitality is an important part of their culture, to the extent that making visitors feel welcome is almost a competition for them. I heard story after story of this Georgian hospitality, and then I was able to experience it first-hand through a Georgian friend I made in Tbilisi.

During my visit, she played chauffeur on several occasions and treated us to extravagant meals, often ordering three times as many dishes as we could ever consume, refusing to take a dollar (well, a lari) in return. This, perhaps more than anything, flavored my positive perception of Georgia and is a big reason I’d now call it one of my favorite countries in the world. 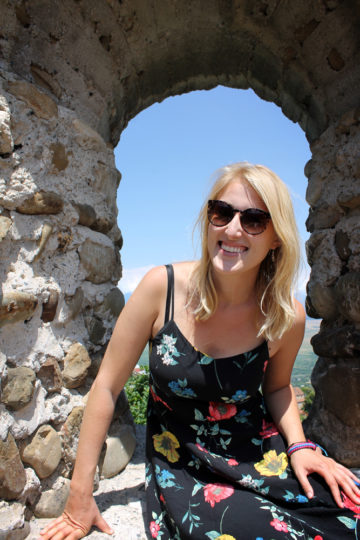 I applaud anyone who’s venturing beyond their backyard, but let’s be real: some travelers are simply more enjoyable to be around than others. In my travels, I’ve met all sorts of people, many of whom were in very different stages of their life or had entirely incompatible travel priorities. And certain regions tend to attract specific types of travelers. Maybe I just got lucky, but the Caucuses seem to draw in some of the best people out there. Because it’s somewhat off the beaten path, those who make it to Georgia, Armenia, and Azerbaijan tend to be curious, open-minded, adventurous, and respectful—all traits that are fantastic to be around when you’re traveling. 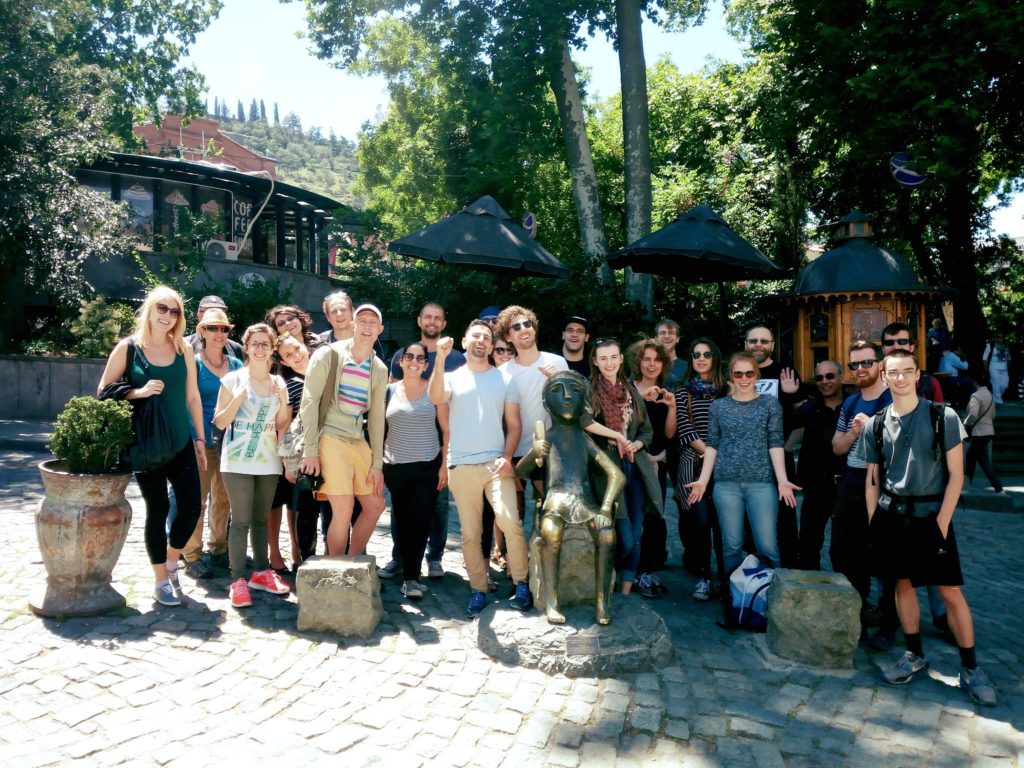 I somehow managed to get NO good photos with my travel friends, but here’s one of the tour group where I met many of them, courtesy of Tbilisi Hack Free Tours)

On my first day in the region, after a red-eye flight and only a few hours of sleep, I forced myself out of bed to join a Tbilisi free walking tour. There, I ended up chatting with fellow travelers, joined a few of them for lunch following the tour, and then ended up spending the next two weeks hanging out with them and people they introduced me to. One of my most cherished travel friends of all time is someone I met on that Tbilisi tour and spent much of the next two weeks with, and I’m eager to host him when he passes through L.A. later this year.

As much as I love solo travel, travel buddies allow you to experience plenty of new things you wouldn’t do on your own—like doing karaoke in Tbilisi, trying new cafes in Yerevan, or attempting an escape room in Baku—and just make the experience so much more fun. It’s largely thanks to these travelers that I’m wild about the Caucasus. 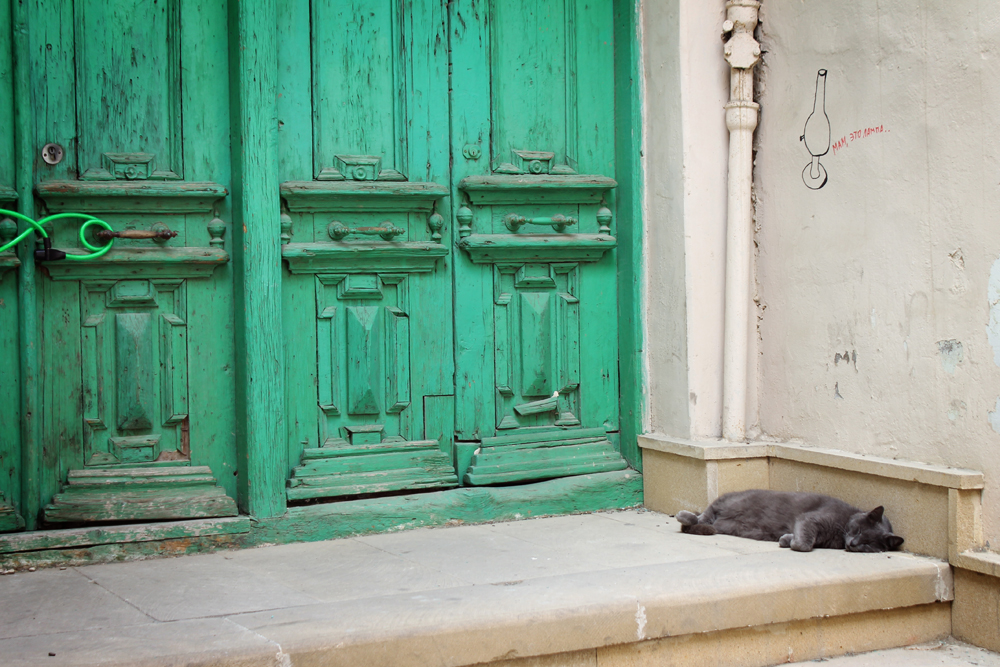 The Cats-pian city of Baku

I could go on and on about the Caucasus, and I’m sure this isn’t the last you’ll be hearing from me on the subject. I’ve seen some amazing places and have built a wonderful life for myself since returning to the U.S., but the time I spent in Georgia, Armenia, and Azerbaijan will forever remain two of the most magical weeks of my life. While tourism in the region (and, thus, tourism resources) has grown since my visit, if you’re at all hesitant to book a trip due to a lack of information, please reach out to me! I couldn’t recommend these countries enough. I hope you, too, can discover the magic.