(Not So) Front-Row Seats to Spanish Fútbol Mania

I may not be much of a sports fan, but if there is one sport I’ve always loved playing and watching, it’s soccer. So it’s pretty sweet that I just happen to live in a country that goes absolutely nuts over the sport and also is home to some of the best teams in the world.

Throughout my time in Spain, I’ve made a point to integrate myself into Spain’s fútbol fanatic culture. I’ve been fortunate enough to witness from Spain parts of 2006 and 2010‘s World Cups, as well as the 2012 Euro (plus, I got to cheer on Spain from Switzerland as the won the 2008 Euro). I’ve thrown myself into packed bars to watch battles between rivals Real Madrid and Barcelona or Sevilla and Betis. I’ve been asked about a trillion times by students, “¿De qué equipo eres?” (always met by boisterous cheers and jeers) or “Do chu liiike [insert Spanish footballer]?” I’ve waited for hours to get feet away from Real Madrid’s players when they’ve practiced at UCLA the past few summers and watched a match-up between los blancos and the L.A. Galaxy in my hometown. 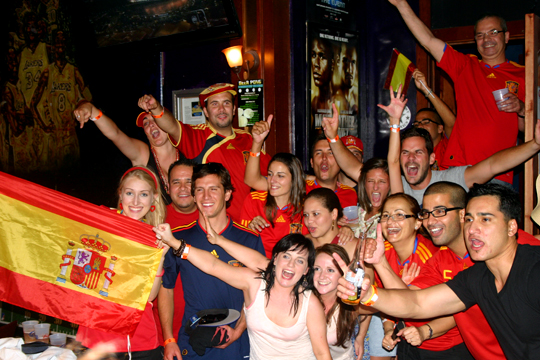 And, this year, I’ve had the chance to witness two major soccer matches live: a World Cup qualifier between France and Spain and an El Clásico, a showdown between Spain’s biggest teams and fiercest rivals, Real Madrid and FC Barcelona.

In October, I was thrilled to hear that my favorite sports team in the entire world, the Spanish national soccer team, would be competing against France in a World Cup qualifying match right here in Madrid. I snatched up tickets as fast as humanly possible, and, a few days later, I was donning red and yellow (sadly, I left most of the Spain fan apparel I’ve collected over the years in the States!), meeting up with two of my friends from college, and heading to Atlético Madrid’s Vicente Calderón stadium to see my beloved La Roja compete for a spot in the 2014 World Cup. We may have been in the nosebleed section, sure, and a 1-1 tie was a boring result, but seeing my favorite team and my favorite players playing below me was unreal. 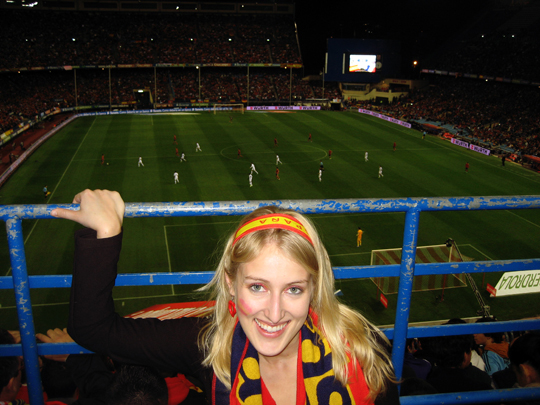 And just yesterday, thanks to a tip from my roommate that tickets were remarkably cheap, I attended an El Clásico match. El Clásico is the name for any game between Spain’s two biggest soccer clubs and vicious rivals, Real Madrid and FC Barcelona. Think about your team of choice’s rivalry, and multiply that by ten (UCLA vs. USC? Pfft, nothing compared to Real Madrid vs. Barcelona). I’ve always dreamed of going to one of these matches but figured they’d be far too expensive, so I settled for watching them on TV and hoping to eventually get tickets to see Real Madrid play a lesser team. But the two teams made it to the Copa del Rey (a major Spanish fútbol tournament) semifinals, the first game of which was to be played in Real Madrid’s home stadium, Santiago Bernabéu, and my dream was about to be realized!

The game, unsurprisingly, was a blast. Even just being in Santiago Bernabéu was thrilling, but Real Madrid and Barcelona fans are insane on their own, and their insanity is only intensified in major rivalry games. The loud cheering, singing, and heckling was enough entertainment for a lifetime. The two teams are both obviously phenomenal, so watching them play was amazing, and I loved seeing some of football’s biggest current players, like Xabi Alonso, Messi, and Piqué, in action. 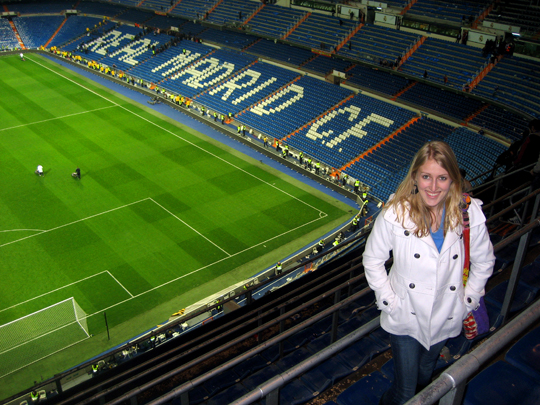 Hopefully, in the rest of my time here, I can experience more matches and fanaticism, an essential aspect of modern Spanish culture. A por ellos, hala Madrid, etcetera!

Have you attended any amazing sports match-ups in Spain or elsewhere? ¿De qué equipo eres?